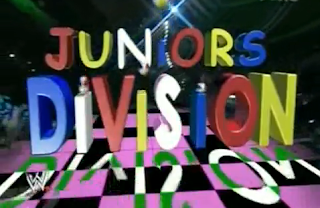 On Episode 2 of Podcast of 1,000 Holds we were talking about midget wrestling and failed to mention the short lived WWE Juniors Division.  This was pointed out by my buddy Roy, the same Roy that reminded me of the Natural Disasters tag team championship reign.

Looking into this there is good reason why it slipped my memory, because there is so little to recall. The division was announced on the October 21, 2005 episode of SmackDown by Network Executive Palmer Canon and SmackDown General Manager Theodore Long.

The guidelines of the Juniors Division were any world-class athlete 5 foot tall or under.  Long  said "Midgets, dwarves, the little people, they're all welcome.  We don't discriminate against anybody on my show as long as they can bring it."

Canon added "The network believes there's big ratings and big excitement in the new Juniors Division.  I think fans will be shocked at what these tiny, but talented, competitors can add to the already incredibly gifted roster here on Friday Night SmackDown."

My research shows that this division didn't last long at all, from end of October 2005 to end of February 2006.  I could only find seven matches in total that started on SmackDown before they migrated to Velocity, the SmackDown talent secondary show.  The Juniors did not appear on house shows or Pay Per View events.

Super Porky was eating a large ham through out the segment.

Short Sleeve Sampson pinned Pitbull Patterson
Patterson came to the ring with a bucket, threatened to throw it on Sampson, it had confetti in it.  Then Sampson pulled out a bucket, his had water in it.

Sampson jumped off Nick Patrick's back splashing Pitbull for the win.  After the match Simon Dean attempted to attack Sampson, but both Junior double teamed him.

Palmer Canon joined the commentary team for the match.

Palmer Canon joined the commentary team for the match.

Side note, this show also featured Eddie Guerrero's last match before his death.

After nearly three months with no matches the Junior Division returned

Octagoncito & Pequeno Violencia vs. Mascarita Sagrada & Tsuki went to a no contest when Finlay ran in and assaulted all four, hitting Tsuki with Celtic Cross.  He cut a promo stating he came to fight no matter how big or small

Pequeno Violencia is 5'2" tall which is two inches over the previously established height limit of the Juniors Division.

I'm pretty sure this venture failed because it was presented as the stereotypical midget comedy spot match, complete with Tazz and Cole making short jokes and puns, instead of an actual wrestling contest.  That and when you only have two backstage and 7 matches in a near six month period it's not going to go over.

Even though the Juniors Division was phased out in February 2006 in May of that same years Hornswoggle debuted for the WWE as Little Bastard the leprechaun of Fit Finlay and work for the WWE for the next 10 years before being released in May 2016.

Thanks for reading, please leave a comment, check out my the other posts, and life the Facebook page.

Later Readers!
Posted by Michael J. Labbe at 3:53 AM