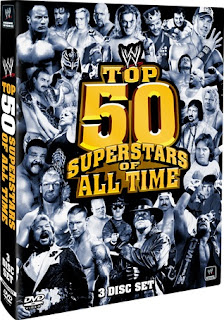 Hosted by Todd Grisham, WWE’s 50 Greatest Superstars is an excellent countdown documentary of the 50 greatest stars as decided by the current superstars in the WWE.

Each wrestler featured is highlighted in a 2.5 – 3 minute bio-clip featuring highlights of great moments as well as comments both old and newly recorded by fellow superstars.  The bio-clips for the top 5 were a couple minutes longer.  Most of the bio-clips are extremely emotional and can make you laugh, smile, and at times cry.

One of my favorite bio-clips is of Bruno Sammartino for the comments from Vince J McMahon and the old comments from Bruno himself.  I would truly love WWE to put out some documentaries on the 60’s & 70’s with the old footage.

William Regal, Arn Anderson (both should have their own DVD’s), and Matt Striker provide some of the best comments on almost every superstar.  Other’s that comment frequently are the Miz, JJ Dillon, John Cena, Jerry Lawler & Billy Kidman.  There are many, many more that comment as well.

As far as placement on the list, I don’t agree with Rey Mysterio being in the top 10, and am appalled that Arn Anderson & Tully Blanchard were left off the list.

Number 1 on the list is Shawn Michaels, and he deserves it, Chris Jericho sums it up best with, “He steals the show at every event that he is on, because he’s Shawn Michaels and that’s what he does.”

The Extra’s on this 3 DVD set are amazing as they cover a broad spectrum of time including:

Plus many, many more matches, 21 in all.

Definitely a great DVD to add to the collection!

Later Readers!
Posted by Michael J. Labbe at 4:44 AM