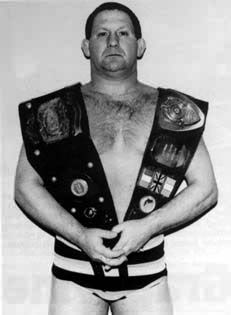 I don't ever recall hearing or reading about Jim Breaks before, but after hearing Daniel Bryan talking about him during Zack Sabre Jr's matches in the Cruiserweight Classic Tournament I wanted to look into him but forgot until recently.

I've always been very fond of the British style of wrestling and many of my favorites are from that style of wrestling.  Dynamite Kid, William Regal, Fit Finlay, Dave Taylor, Zack Sabre Jr to name a few.  One of the things I like most about Sabre Jr is his unique arm locks and wrist joint manipulations that he does and Daniel Bryan called it the Jim Breaks Special.

Searching the internet I couldn't find out much about Jim Breaks:

Born March 25, 1940, he hails from Bradford, England, he's short at 5' 5", has the nickname "Cry Baby" and began wrestling in 1954.  He wrestled for both Joint Promotions and Brian Dixon's All Star Wrestling and the last recorded match I can find is June 8, 1988 where he defeated Peter Bainbridge at the Civic Hall in Bedworth, England for All Star Wrestling.

I also found him listed as a World Lightweight Champion with him winning the title May 11, 1985 but the lineage was questionable.

I couldn't find much of anything else out so I watched some matches on You Tube and I must say I was thoroughly entertained!  He's a heel and the nickname "Cry Baby" came from his tendency to cry out, throw tantrums, and argue with the referee and the crowd during his matches.  He used comedy and trickery in his matches getting the ire of the fans. During the matches, especially the one with Dynamite kid, when he delivers a joint move you can hear a popping or cracking noise and I all I can think of his he's making the noise with his mouth or someone at ringside is, but if that is the case the timing is amazing.

Here is the links to the matches that I watched:

Jim Breaks vs. Johnny Saint - March 14, 1973 World of Sport simply and amazing match by two of the best in the business.

Jim Breaks vs. Tom Thumb - World of Sport maybe early 80's not really sure.  Thumb was shorter than Breaks and this was primarily a comedy style match.

Jim Breaks vs. Sammy Lee - World of Sport about 1980.  Sammy Lee is the legendary Satoru Sayama the first Tiger Mask in NJPW.

You can find numerous more videos of Mr. Breaks in action on You Tube.  I would really like to know more about Jim Breaks and I'm going to keep searching because maybe I'll find something and If I do I will share it here.  Currently he resides on the Canary Islands,