The Final Ride of Ricky "The Dragon" Steamboat 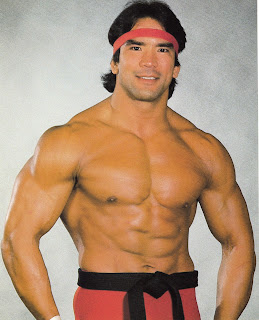 Ricky "The Dragon" Steamboat is one of the greatest wrestlers of all time.  A perennial babyface in all the documentaries and interviews I have watched or books I have read I have never heard anyone say anything bad about Steamboat in anyway.  In fact everyone praises how much they enjoyed wrestling Steamboat and how good he was in the ring. 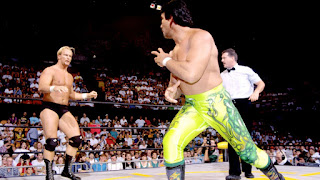 On August 24, 1994 at Clash of the Champions XXVIII  in Cedar Rapids, Iowa Steamboat defeated "Stunning" Steve Austin to win the United States Championship.  During the match Steamboat injured his back, he managed to wrestle at house shows the next four days defeating Austin at each one.  Unfortunately the injury was too severe and signaled the end of Steamboats in ring career.  Or did it?

In the years that followed Steamboat would show up in wrestling in different rolls for TNA, Ring of Honor, and various independents, but he never stepped in the ring.  In 2005 he returned to the WWE as a road agent.  He made it known that he would like to come out of retirement in 2006 at WrestleMania to have a match with Ric Flair, I really wish that, that would have happened.

Even though he didn't wrestle Flair he did step back into the ring for the first time in almost 15 years, at WrestleMania XXVI teaming with "Rowdy" Roddy Piper & Jimmy "Superfly" Snuka losing to Chris Jericho in a three one on handi-capped match. 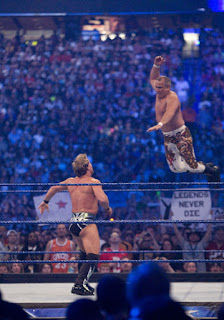 Steamboat looked amazing!  He literally looked like he never lost a step sinking in those deep arm drags, skinning the cat, coming off the top rope, launching himself over the top rope to the floor!  Amazing! 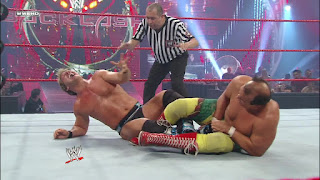 On April 26, 2009 at the Backlash pay-per-view in Providence, Rhode Island, Steamboat stepped in the ring with Chris Jericho losing in twelve and a half minutes.  Once again Steamboat looked phenomenal in the ring.

In June Steamboat started working select house shows wrestling Sheamus, Drew McIntyre, and Chris Jericho.  He won all but his match with Jericho in Japan on July 8, 2009.  In August he teamed with his son Richie defeated Hiram Tua and Orlando Colon at WWC Summer Madness in Puerto Rico.

Steamboat would next compete in the ring on June 18, 2010 once again teaming with Richie at FCW's Father Day Salute in Ft. Myers defeating The Dudebusters.  This is Steamboat's last match to date, and as it's been seven years it's safe to say it was his last.

No one in wrestling has ever returned to the ring after a 15 year layoff looking as good as Steamboat did.  It would have been nice to have seen one of those matches in person or at least released on home video.