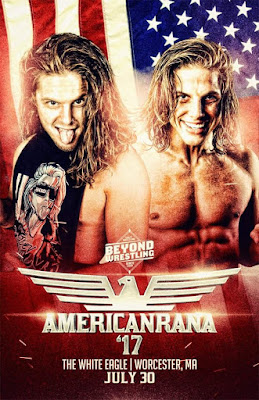 Here is my review of the Beyond Wrestling's Americanrana Matinee Show at The White Eagle in Worcester, Massachusetts on July 30, 2017.

Match 1: Brian Milonas defeated Ace Romero
Solid big man match but I enjoyed their match at Paying Paul back in January better. There were a few awkward spots and the Vader Bomb finish was very anticlimactic. Despite that, this was a solid match that saw the action spill to the floor early. Good match to open up the day of wrestling.
7/10

In Ring: Cam Zagami comes out and says that this is AmeriCAMrana. He then makes fun of the crowd and issues an open challenge. Good promo.

Match 2: Josh Briggs defeated Cam Zagami
This was pretty much a quick squash. Briggs got the win with an Inverted Crucifix Powerbomb.
4/10

Match 3: Tracy Williams defeated Mikey Webb
Good match. Mikey Webb had dreads which was really weird. People kept making fun of him and for good reason. I wasn't sure if Webb would be able to keep up with Williams' technical style but I was pleasantly surprised. They both fought hard but in the end Williams got the win with a brutal piledriver.
7.5/10

In Ring: Dan Barry, Ryan Galone, Mike Verna and Rex Lawless come out. Barry says that since Lawless is injured, Verna is his replacement. Barry then issues an open challenge to any serious 6 man team. Out comes The Secret City Soldiers: Da Hoodz and Anthony Stone. Barry then makes fun of them and says that Anthony Stone hasn't been relevant in Beyond Wrestling since 2012. Barry says that his guys don't need him to win so it will be a handicap match.

Match 4: Ryan Galone & Mike Verna w/Dan Barry and Rex Lawless defeated The Secret City Soldiers: Da Hoodz: Davey Cash & Kris Pyro and Anthony Stone in a 2 on 3 Handicap Match.
Solid match with Pyro taking a massive beating. When he finally tagged out they had a ton of fast paced offence including a double coast to coast from Pyro and Stone on Galone while Cash hit a running dropkick at the some time. This was pretty sick. The end came when Stone went to break up Verna trying to powerslam both Pyro and Cash but Lawless hit him with a crutch behind the referee's back allowing Galone to toss Stone on the pile and Verna powerslammed them all for the win.
6.75/10

Match 5: Jay Freddie defeated Rory Gulak
I wasn't really sure if this would be a good match or not. Jay Freddie has become on of my favorite guys to watch but Rory Gulak on the other hand hasn't really done much for me since he stopped doing deathmatches. I was impressed with this match though. Gulak showed that he could more than keep up with Freddie in a techincal battle. The match turned to a hard hitting battle towards the end with Gulak taking a very brutal suplex on the ring apron. Freddie got the win with a Fisherman's Suplex.
7.75/10

Match 6: Tom Lawlor w/His Corner Man defeated Bobby Fish
This match had way to much MMA type stuff for my liking but it did turn out to be a solid match. It looks like Lawlor could become another of the MMA guys to transition well into pro wrestling. Lawlor kept going for a rear naked choke throughout the match but Fish kept getting out until the end when he passed out to one and the referee stopped the match.
6.75/10

Match 7: Brandon Watts defeated AR Fox with Shynron as the special referee
This was an awesome match and by far the best on the matinee show. Tons of action all over the place with it spilling to the floor a bunch of times. Fox went to use a chair but referee Kevin Quinn came out and prevented it. Fox shoved Quinn who ripped off his referee shirt and punched Fox allowing Watts to almost get a win with a school boy. Lots more back and forth action followed until Watts his a frog splash elbow for the win. Check this match out its really good.
9/10

In Ring: Shynron congratulates Brandon Watts on his win and puts him over. He then challenges Watts to a match and Watts accepts.

Overall this show scored a 48.75 out of 70 for an overall score of 69.64%. This was solid show with a ton of good wrestling. The main event really stood out as being the best match and is worth the price of the DVD alone. I'm looking forward to the Brandon Watts vs. Shynron match. That should be awesome. 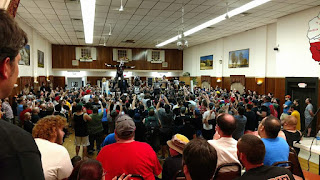 Here is my review of Beyond Wrestling's Americanrana on July 30, 2017 at The White Eagle in Worcester, Massachusetts

Match 1: Team PAWG: Lufisto & Jordynne Grace defeated Doom Patrol: Chris Dickinson & Jaka
Holy Shit, what a crazy match. Grace took a vicious beat down early with Dickinson hitting a brutal German Suplex on her. When Grace finally got the tag the crowd erupted. Many violent looking moves from both teams. In the end Team PAWG got the surprising win with their running double hip attack move on Jaka. The crowd was super into this match and it was an excellent choice for the opener. One of the best inter gender matches I have ever seen.
8.5/10

Match 2: Jonathan Gresham defeated Brian Cage
I wasn't to sure about this match. Mainly because I'm getting sick of seeing Gresham in the underdog roll against a guy twice his size, but I was pleasantly surprised. Gresham took a beating until he was able to get a hold of Cage's leg. At that point he did a great job of working the leg. This match was solid throughout until the ending. It was very abrupt with Gresham rolling through a submission attempt into a small package for the win.
7.75/10

Match 3: Jon Silver defeated JT Dunn
What an awesome match. I was really looking forward to this one and it blew away my expectations. Many sick spots and Dunn played a excellent hell. Check this match out, you won't be disappointed.
10/10

Match 4: Chuck Taylor w/Orange Cassidy defeated Swoggle in a TLC Match
This match was crazy right from the get to with Swoggle eating chair in the face right as the bell sounded. Now I'm not really into comedy wrestling but I really enjoyed this one. It saw Massage NV, Johnny Cockstrong, The Swamp Monster, Stan Stylez and Dick Justice get involved. Even Trent Barreta came to photo the chaos. Then end came when Taylor hit a piledriver into a bunch of tacks then he rolled up Swoggle for the win. Check this out its some great comedy wrestling.
7/10

Match 6: David Starr defeated Donovan Dijak
Very good match here. Great leg work by Starr with some great selling by Dijak. Great back and forth action with a bunch of near falls. Near the end Starr took he microphone and dragged Dijak through the mud calling him a sell out. Dijak then came back with a Feast Your Eyes but only got 2. Starr then hit a brainbuster on his knee then an arm clenched german suplex for the win.
8.5/10

In Ring: David Starr puts over Dijak huge, saying that when Biff Busick left Dijak stepped up and filled the void. He went on to say that he was honored to wrestle Dijak and that Dijak is his favorite wrestler. He then gave him well wishes. Dijak took the microphone and said that his last match for Beyond Wrestling will be on August 13th and it will be against Walter.

Match 7: RPG Vice: Trent Barreta & Rocky Romero defeated Da Hit Squad: Dan Maff & Monsta Mack
This was good very heated battle, especially between Monsta Mack and Trent Barreta. For some reason they hate each other. These guys battled hard and all over place with the fight spilling to the floor. The end came when RPG Vice hit a Dudebuster/Double Stomp for the win.
8.25/10

Match 8: Joey Janela w/Penelope Ford defeated Matt Riddle
Good main event and much better than I expected. I wasn't really sure how the 2 totally different styles would work together but they did. I don't care for Riddle at all but he impressed me in this one. Janela hit some sick spots, a moonsault to the outside, and he even attempted a somersault onto the apron but Riddle moved and Janela smashed his ass. How he didn't break his tailbone is beyond me. Surprisingly Janela got the win with a Crippler Crossface making Riddle tap out.
8.25/10

This show scored a 68 out of 80 for an overall score of 85% What an awesome show. One of the best I have ever seen live. Everyone fought very hard and put forth their best efforts. Silver vs. Dunn was unbelievable and the intergender tag match was completely insane. When this comes out on DVD do yourself a favor and buy it. You won't be disappointed.

Later Readers!
Posted by Michael J. Labbe at 4:07 AM