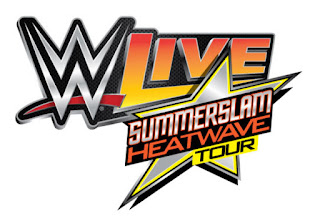 When the WWE comes to town about 10 miles from your home and you're a lifelong wrestling fan, you go! A few weeks out I went to the Augusta Civic Center box office to pick up a couple of $25 tickets to avoid the ticketmaster fees.  We were in section 24 right in the front row on the aisle and they were fantastic seats.

This is Canaan's fifth WWE event and my 36th.  Rating overall definitely not the best show I've ever been to for the company, but it was a fun above average show.  The civic center was close to full, I'd wager about 4,000 fans, and they were into it which always makes it better.

One of the things that I liked the most about the house shows when I was younger was that the set up was simply, ring in the center of the venue, spotlights and the house public address system.  No lighting set up, no entrance set, just bare bones like the footage I used to watch on Coliseum Home Video or Prime Time Wrestling.

In 2012 when they started adding the set with mini titantron, lighting rigs, and sound system it was when they jacked the ticket prices up from $55 to $95 on the first few rows.  I was super annoyed because it priced me out of trying to buy front row for my son and I. Last night was the first I night I truly enjoyed those additions. 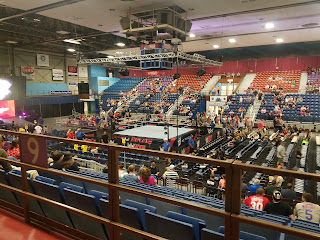 Ring announcer Tom Rome was the host for the evening and from when we got through the doors just past 6:30pm until the show started at 7:30pm they played various clips on the tron from top 10 lists to retro wrestling moments.  Also Rome did various live spots from around the building about that nights show and the upcoming SummerSlam.  It really helped pass the time until the show started, which was promptly at 7:30pm. 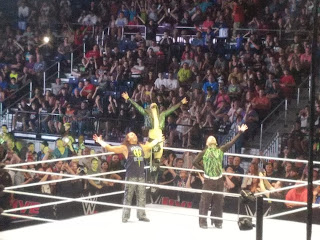 Big pop for this opening trio, all guys my son wanted to see the most at once.  Hardy's got some delete chants in showing that even the fans in Maine know what up with the Broken.  Samson sat on a stool at the top of the entrance ramp singing a song.  At one point when he was booed loudly he told the crowd to quiet down or he'd have to start over. 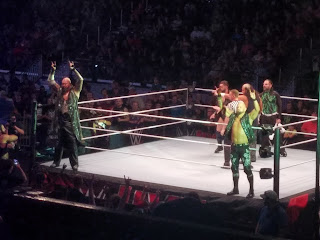 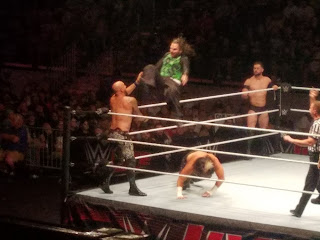 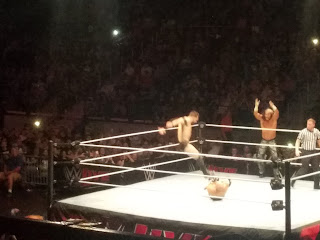 Decent match, all the guys worked hard, probably my favorite match of the night.  The good guys for the win when Balor hit the coup de gras on Anderson for the three count. 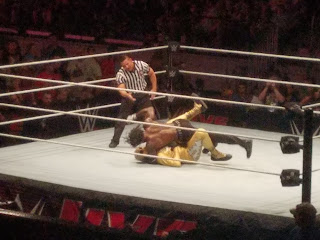 I was excited to see Goldust, probably the only one.  I've always been a fan of Dustin/Goldust because he's really good in the ring and historically he's put on some pretty fantastic matches on house shows.  This one lasted two minutes when he pinned Truth with his feet on the ropes. 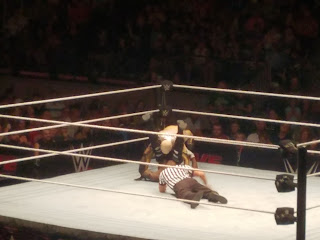 Interesting note, the first ever WWE show I went to at the Augusta Civic Center in March 1996 and Goldust was on the card. 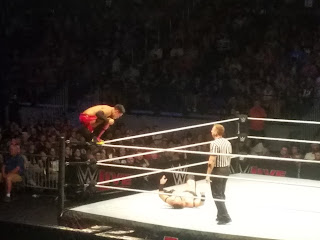 This was a good match, I was hoping we'd get a title change.  I really want to witness a house show title change.  Someday it will happen!  The finish came when Tozawa missed his senton and Neville locked on his submission finisher for the win. 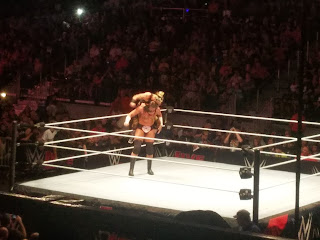 This was not a match, there was no referee in the ring.  Enzo came out and did his typical microphone work, called out Big Cass.  Cass came out and after a minute layed out Enzo.  That was it, both guys went to the back after.

For some reason the order of introductions was Seth Rollins, Axle & Dallas, and then Ambrose.  I'm pretty sure that they were trying to telegraph the alleged tension between Rollins and Ambrose if they are going to actually team together at SummerSlam.  They didn't relay that message well. 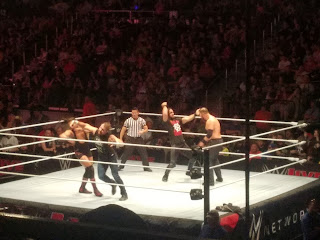 Rollins, Axle, and Dallas all looked great, Ambrose was is typical lazy self going through the motions.  His neckbreaker consists of facing a guy grabbing a him by the head and and rotating them both around and they both fall flat on their backs and during the fall Ambrose lets go of the guy.  Somehow, even though they both do the same thing taking the same back bump it only hurts the other guy and Ambrose jumps up. 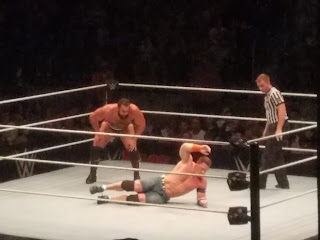 This SmackDown feature match was the last prior to intermission.  That is also a decent match, better than I expected it to be.  Cena was over big time I can only recall a small smattering of Cena Sucks chants.  This match featured a ref bump and then a low blow by Rusev.  He then tried to hit Cena with the belt but Cena nailed and AA for the pin. 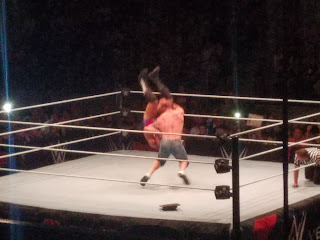 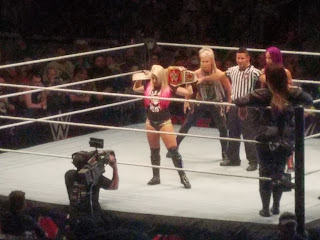 Mickie James substituted for the injured Bayley.  Sasha Banks got the biggest reaction.  I'm a fan of almost all these ladies and this is the first time I've seen four of them.  Once a again a decent match with everyone putting in a great effort.  It's the best of seen Dana Brooke in the ring to date. 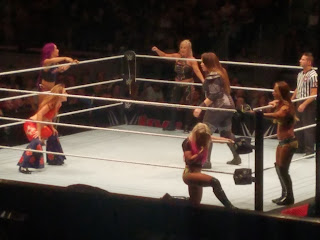 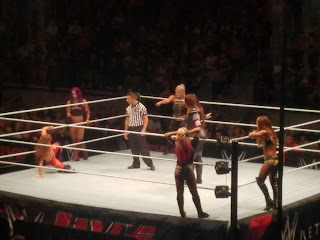 The finish came when Sasha showed us all just how flexible Emma was submitting her to the Bank Statement. 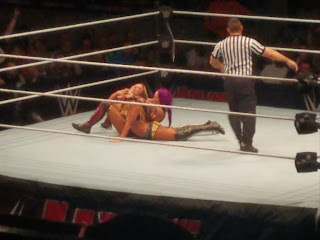 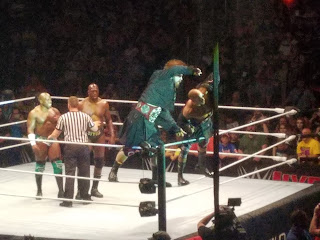 This was a title match that I had no belief that title would change hands.  I like the team of Sheamus and Cesaro, they've become and actual team, wearing similar outfits to the ring, creating signature entrance and even tandem moves.  They just need a name. 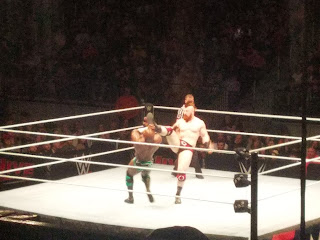 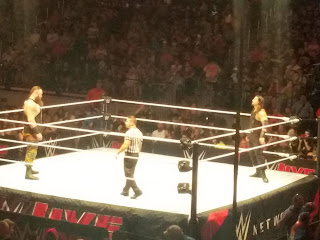 Somehow Strowman is bigger in person than on TV.  I mean he really is a mountain of a man.  I know I sounds like a broken record but, this match was better than I thought it would be.  I was actually kind of impressed with Reigns tonight and Strowman has consistently surprised me with just how good he is in the ring for a man of his size. 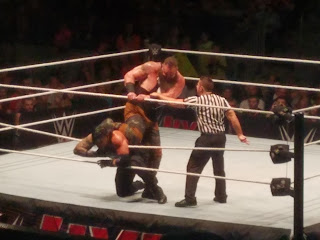 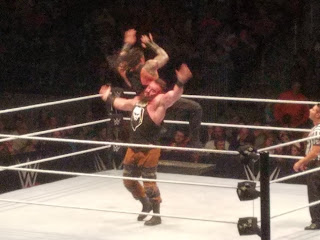 Braun was disqualified when he took the ring steps and struck Reigns.  Post match he continued the beat down of Reigns hitting him with the stairs and tossing him into the ring post before putting him back in the ring.  Braun then slide a table into the ring setting it up in the corner.  Of course, Reigns eventually made a comeback and speared Braun through the table much to the delight of the crowd. 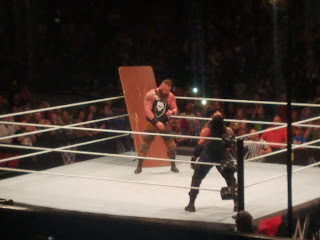 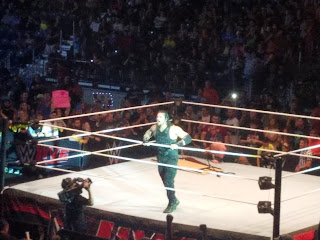 Like I said the fans were really into the match, the booed the bad guys and cheered the good guys just like there were supposed to.  Cena got nothing but love and even Reigns was heavily cheered.  Again definitely not the best house show I've ever been took but it was better than average.  Our seats were great and I will buy those in the future.

I took all the pictures with my phone, the lighting is never good for pictures at wrestling but these are some of the better shots.


March 1, 1996 Civic Center , Augusta, ME
The Godwinns: Henry & Phinneas defeated The Bodydonnas: Skip & Zip with SunnyDuke “The Dumpster” Drose pinned Hunter Hearst Helmsley“The Ringmaster” Steve Austin pinned Marty Jannetty
Owen Hart pinned Scott Taylor (sub. for Yokozuna) following an enzuiguri
Savio Vega (sub. for Razor Ramon) defeated Intercontinental Champion: Goldust via count-out when he walked to the back
The 1-2-3 Kid pinned Bob Holly at the 10-second mark with a spin kick
Ahmed Johnson defeated TatankaWorld Champion: Bret “The Hitman” Hart defeated the Undertaker via count-out when Goldust interfered piledriving Taker on the floor; Diesel was also scheduled to be part of the match, making it a 3-way, but was unable to wrestle due to injury