I really like tag team wrestling, especially when it's done right.  I like it even more when the members of the team dress similar, have a name, and the duo works like a team.  A well polished tag team should be able to beat any team of two random guys thrown together no matter who they are.

The tag team division of the WWE in the 1980's had the deepest roster depth for actual teams compared to any other time in the company, in my opinion.  The Survivor Series in 1987 and 1988 showed just how deep it was when each year featured a five on five tag teams elimination match, 20 men in each match!

In this post we take a look at The Last Match of those teams. 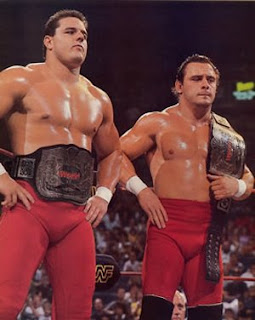 One of my all time favorite tag teams they were partners from 1983 - 1990 holding tag team championships in Stampede Wrestling and the WWE.  After parting ways Davey Boy would go on to have a successful run in the WWE with two short stints in WCW passing away in 2002.  Dynamite Kid would wind down his career in 1994 because of injuries returning for a single match in 1996.  Currently Dynamite resides in England confined to a wheelchair from injuries suffered in the ring.

This is probably the most well known Last Match on this list.  They duo hadn't teamed since July 11, 1988 when they reunited for this match as Martel had taken time off to care for his wife.  Martel turned on Santana turning heel and abandoning him in the match. 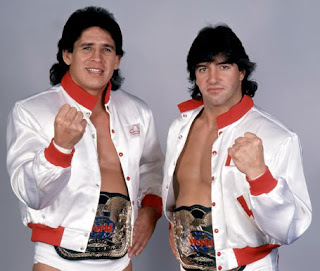 They teamed together for just over two years, after Santana would compete in the WWE until 1993 he then hit the independents where he has wrestled a steady schedule most recently as May 2017.  Martel would become the Model leaving the WWE in 1995, he made a brief run in WCW (read about that here) retiring in 1999.

Interesting note, in the AWA in the summer of 1982 Martel and Santana teamed up for several matches included challenging Greag Gagne & Jim Brunzell for the AWA Tag Team Championships

Teaming together from March 11, 1987 - March 19, 1989  the babyface duo primarily competed in the mid-card section of the division.  They did have a series of matches with Tag Team Champions: The Hart Foundation in September 1987. 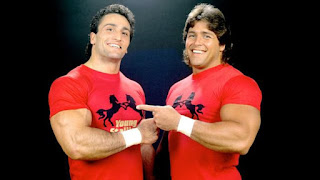 The duo parted ways working as singles.  Powers left the WWE in 1994 joining WCW for a two year run in 1996.  He left wrestling for 10 years returning in 2008 wrestling eight matches until his last in 2010.

Roma teamed with Hercules as Power and Glory from 1990 - 1991, they were a tag team I really enjoyed.  Roma joined WCW in 1993 as a member of the Four Horsemen.  He would stay with WCW teaming with Paul Orndorff and wrestling singles until 1995.  He left wrestling in 1997 returning 10 years later on the independents. 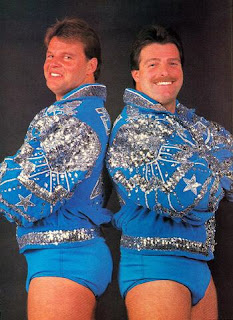 This brother duo first teamed together in 1981 in their native Montreal.  In February 1986 they started full time with the WWE.  Jimmy Hart became their manager and they relocated to Memphis, Tennessee becoming "All American Boys".  Raymond retired in 1990 and in 1991 Jacque returned as The Mountie. 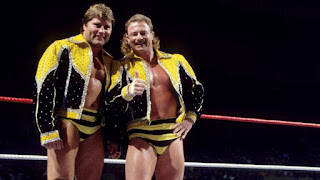 Blair was already in the WWE when Brunzell signed, debuting as a team June 17, 1985 at the Mid-Hudson Civic Center.  They were babyfaces and wore matching gear and came to the ring maskless, however at some point in the match they would put masks on and trade places in the ring fooling the referee and heel opponents. 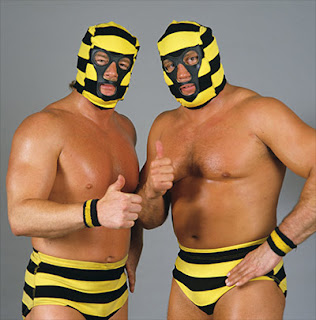 They would split up as a team in August 1988 both staying with the WWE as singles wrestlers.  They would team together for a couple matches in 1991, 1993, & 1994 for the UWF wrestling as The Bees, The Killer Bees, and Masked Confusion.  They also teamed in 1994 in the AWA as The Killer Bees. 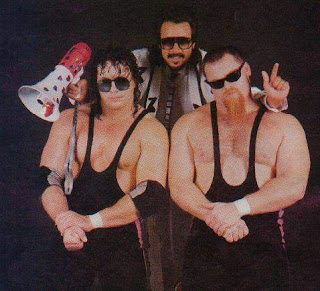 The brother-in-laws first teamed together in Stampede Wrestling in 1982 but did not tag regularly until joining the WWE in 1985.  Over the next six years they would become one of the premier tag teams in the promotion winning the Tag Team Championships twice. 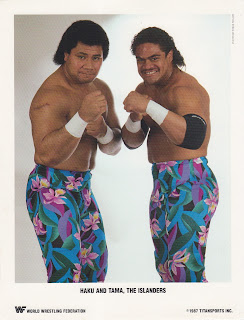 Both wrestlers were already competing in the promotion under different names when they were repackaged as a team with new in ring names.  Debuting as babyfaces in August 1986 I was a huge fan of this team when I was a kid.  They turned heel shortly after WrestleMania III and were managed by Bobby Heenan. 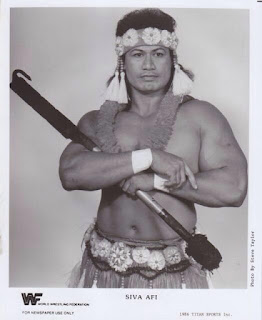 In April 1988 High Chief Afi joined the team and the competed as a trio for a very short time before Fatu left the promotion.  Haku and Afi contiuned as the Islanders until Afi's released.  Haku stayed with the WWE before eventually have a nice run inWCW.