The Greatest Robes in Wrestling 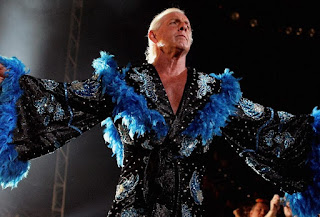 When most people think of a professional wrestler wearing a robe "Nature Boy" Ric Flair comes to mind.  Flair is very well known for wearing elaborate robes made of feathers, rhinestones, some even have capes, and they can be quite elaborate.  A trait his daughter Charlotte continues to this day.

Former multiple time NWA World Champion Lou Thesz wore a robe to the ring frequently in his career which spanned from an amazing 58 years from 1932 - 1990.

Perhaps the most flamboyant wrestler to wear a very elaborate robe was none-other than Gorgeous George.  George, who competed from 1932 - 1962 wore Georgie pins in his permed hair and was known for having both male and female valets to assist him in disrobing.
Women Wrestlers of that era were also known wear ring robes.  Judy Grable who wrestled in the 1950's and 60's was know as The Barefoot Contessa as she wrestled barefoot using her finisher the dropkick.

Robes were not just a fixture in the United States, Japanese greats Antonio Inoki & Giant Baba were wearing them in the 1970's.
Women wrestlers in Japan, known as Joshi Puroresu, have always worn very colorful costumes that also included some pretty fantastic robes.  Devil Masami one of the pioneers of Joshi in the 1970's, Manami Toyota who debuted in 1987 and is still wrestling, and is arguably the greatest women's wrestler of all time.  Currently Askua in NXT probably has the most elaborate costumes in all of the WWE.

In Mexico Lucha Libre stars primarily wore capes, but superstars in the 1980's like "Macho Man" Randy Savage did as well and currently Dalton Castle does.

Ric Flair began wearing robes back in the 1970's and continued to do so thru the end of his career.
The robe he wore in his WrestleMania 24 match against Shawn Michaels is on display in the Smithsonian. 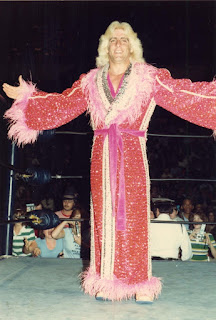 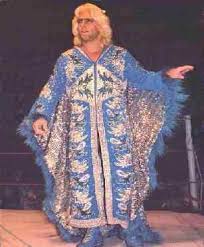 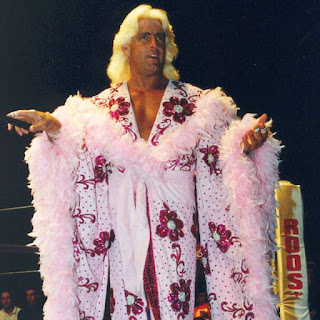 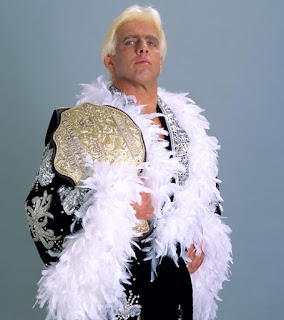 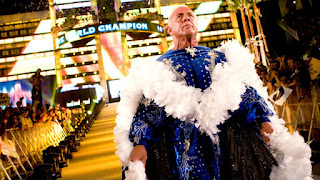 
In recent times William Regal did and Bobby Roode is one of the few who still sports a ring robe.

I read in an interview several years ago that it was Paul Orndorff that told Roode he needed to get himself a nice robe back when he was in TNA.  He did and he hasn't stopped wearing them ever since.


There is not much on the internet that I can find as to why wrestlers wear robes to the ring.  I have a theory that back in early 1900's when professional wrestling was more like Olympic wrestling and matches could last for hours, wrestlers like Hackenschmidt wore robes to keep their bodies warm.  Staying warmed up is an important factor in keeping muscles and tendons from getting damaged during strenuous activity.

From there it probably became a tradition of, well that's just what you do.  Most likely it was Gorgeous George who first embellished the ring robe that lead to wrestlers like "Nature Boy" Ric Flair whose elaborate robes were apart of his presentation in being the most styling and profiling  World Heavyweight Champion in wrestling history.

William Regal once did an interview where he said the reason he always wore a ring robe is because, I can't find the quote so I'm paraphrasing, it felt weird walking to the ring in just his trunks but once he got to the ring and the action started it didn't bother him.

Whatever the reason ring robes and other costumes worn to the ring have been apart of wrestling since the beginning and for some wrestlers what they were to the ring is just as important as what goes on inside the ring.

Incidentally the same can be said for ring jackets and for me the gold standard is the style "Enforcer" Arn Anderson wore.