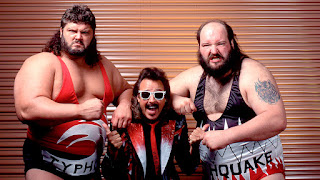 During a recent episode of my wrestling podcast Podcast of 1,000 Holds it was brought up about the Natural Disasters: Earthquake & Typhoon being Tag Team Champions and I refuted it because I honestly had no memory of them wearing the gold.

Contributor of this blog Roy of Roy's Reviews brought it to my attention that they did in fact hold the titles.  So I did a quick search and sure enough in 1992 they held the titles for 85 days.  Because of my error in knowledge I'm dedicating a blog post to the former Tag Team Champions. 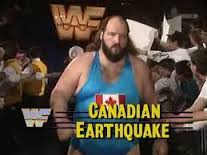 Earthquake, John Tenta, joined the WWF in 1989 initially as the Canadian Earthquake before dropping the geographical location from his name. In 1990 he began a feud with Hulk Hogan culminating at SummerSlam 1990 where Hogan won by count-out.

Typhoon, Fred Ottman, also joined the WWF in the summer of 1989 working house shows until he TV debut in 1990 as Tugboat.  He would eventually team with Hogan in tag matches against Earthquake and Dino Bravo. 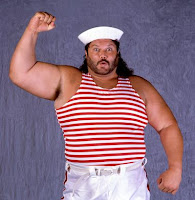 Tugboat turned heel in June 1991 deserting The Bushwhackers in a six man tag team match against The Nasty Boys and Earthquake.  Shortly thereafter he would change his name to Typhoon and join forces with Earthquake as The Natural Disasters.

Their first big match was at SummerSlam 1991 where they defeated The Bushwhackers who had Andre the Giant in their corner.  Post match they advanced on Andre but where stopped by the Legion of Doom.  They began a feud with Hawk & Animal that lead to a Championship match at Royal Rumble 1992 that the Natural Disasters won by count out.

This victory lead to their eventual face turn as their manger "The Mouth of the South" Jimmy Hart used their guaranteed for his other team of Money Inc: "Million Dollar Man" Ted DiBiase & IRS who defeated the Legion of Doom for the Tag Team Championships February 7, 1992 at a house show in Denver, Colorado.

The Natural Disasters defeated Money Inc by count out at WrestleMania VIII and won many matches by DQ on the house show loop.  Finally on July 20, 1992 in Worcester, Massachusetts in Superstars TV taping dark match they defeated Money Inc for the tag team championships. 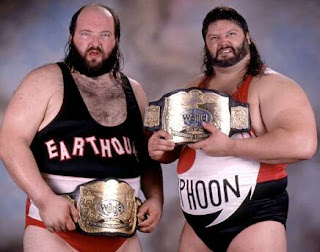 Over the next 85 days they defended the titles at house shows against Money Inc then later The Beverly Brothers: Beau & Blake, while squashing jobbers on TV.

The only pay-per-view match as champions was at SummerSlam 1992 at Wembley Stadium in London, England against The Beverly Brothers.  This is also the only match on the WWE Network with them as champs.  I recently re-watched this match and it was terrible, just awful.  However, the fans were popping huge for them.  I truly cannot believe it or understand why.  I guess wrestling was simpler then, cheered for the good guys and booed the bad guys,

On October 13, 1992 in Regina, Saskatchewan, Canada Money Inc defeated The Natural Disasters to win the titles in a match that aired November 1st on Wrestling Challenge.  The Disasters would win several house show matches but never regained the gold.

Their last match as a team in the WWE was a house show loss to the Headshrinkers: Fatu & Samu on December 12, 1992 in San Diego, California.  At the Royal Rumble in 1993 Typhoon entered at number 21 and when Earthquake entered at number 23 he attacked his partner eliminating him.

There was no follow up to their dissolved partnership as Tenta would leave the WWF in 1993 then return for a Sumo feud with Yokozuna in 1994 before joining WCW later that year.  Ottman would join WCW in 1993 as the Shockmaster.

Ottman and Tenta would team up one more time as The Natural Disasters in a six man tag April 29, 2000 at a Future of Wrestling show where they teamed with Bobby Rogers in a losing effort to Larry Lane & The Suicidal Tendencies Dennis & Sean Allen.

Super World of Sports was a wrestling promotion in Japan that was started in 1990 by Genichiro Tenryu and they had a working relationship with the WWF before folding in mid 1992.  On April 17, 1992 in Yokohama, Japan The Natural Disasters defeated George & Shunji Takano to win the SWS Tag Team Championships.  They would lose the titles the next day on April 18th to King Haku & Yoshiaki Yatsu in Tokyo.

Follow this link to watch: The Natural Disasters vs. King Haku & Yoshiaki Yatsu