It's the Fourth of July, America's Birthday, which means spending time with the family, grilling, fishing, swimming, and if you're me professional wrestling!

The Great American Bash was the brainchild of the "American Dream" Dusty Rhodes with the first event held July 6, 1985 at the American Legion Memorial Stadium in Charlotte, North Carolina under the NWA banner of Jim Crockett Promotions. 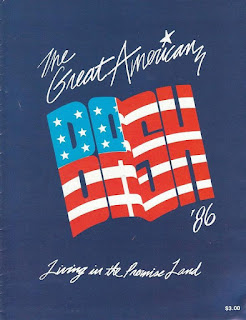 In 1986 the Great American Bash concept expanded from one single show to a summer tour of sixteen shows running from July 1st thru August 2nd around the Crocketts territory.  On the July 26th stop in Greensboro, North Carolina "American Dream" Dusty Rhodes defeated NWA World Champion: "Nature Boy" Ric Flair in a steel cage to win the championship.

In 1987 the Great American Bash featured over 30 shows with double shots on some days.  This year also featured the debut of War Games with matches two matches taking place during the tour. 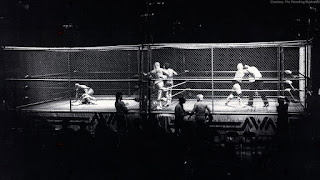 1988 saw the Great American Bash make it's debut on Pay-Per-View July 10 in Baltimore, Maryland.  It also featured the tour running from June 26th to August 7th around the Crockett Promotion's territory.  They had 14 War Game matches on this tour, which is unbelievable really.  Each match featured the Four Horsemen against a combination of Sting, Dusty Rhodes, The Road Warrior, Lex Luger and Nikita Koloff. 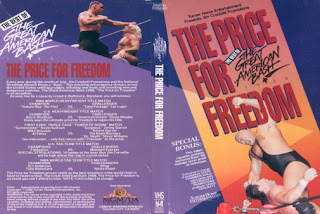 The pay-per-view saw Ric Flair succesfully defend his NWA World Championship against Lex Luger.  Also on the card Barry Windham defeated Dusty Rhodes for the United States Championship, The Midnight Express defeated the Fantastics, and more.  Also the Tower of Doom triple steel cage was featured on the PPV instead of the War Games match.

Once again in the Summer of 1989 under the ownership of Ted Turner, the promotion toured for about a month and a half branching out from the tradition Crockett Territory including the Northeast and Massachusetts.

It also featured a single show on Pay-Per-View July 23 in Baltimore.  Ric Flair defended his World Championship against Terry Funk in the main event.  Also on the card, Sting, The Great Muta, Lex Luger, The Steiner Brothers, Ricky "The Dragon" Steamboat, Brian Pillman, and more.

There was no tour in 1990, however on July 7th in Baltimore The Great American Bash returned to pay-per-view.  The main event of the card saw Sting finally defeat "Nature Boy" Ric Flair to capture the NWA World Championship.  Also on the show, Harley Race, Mike Rotunda, Tommy Rich, The Midnight Express, Doom, The Rock n' Roll Express, Lex Luger and more. 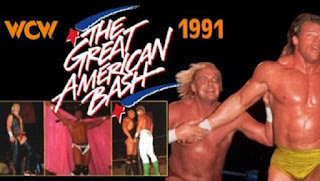 In 1991 the tour returned but by now it did not hold the significance that it did in 1986, 1987,  & even 1988.  The pay-per-view card that year saw Lex Luger defeated Barry Windham for the vacant WCW Championship, Flair had been stripped when he left the promotion for the WWF.  However, the world title match was not the main event!  The main event was Rick Steiner defeating Arn Anderson & Paul E. Dangerously in a steel cage in 2:09!

WCW did not promote a Great American Bash event in 1993 or 1994 but it returned to Pay-Per-View in 1995 and continued annually until the year 2000.  In 2004 the WWE revived the name until 2008 then running a PPV called just The Bast in 2009.  To date the final Great American Bash was not a PPV but a subtitled name for the live episode of WWE Smackdown that aired July 3, 2012.

In my opinion the time in wrestling that I enjoy the most going back and watching is Jim Crockett Promotions in early to late 1980's.  The roster, the crowds, the style of wrestling, it's all simply the best.

When I was a kid I remember renting and watching two VHS tapes that featured matches from those summer tours.  The first is a joint production of Pro Wrestling Illustrated and Jim Crockett Promotions called Ringmasters: Great American Bash 85.  It is a one hour tape hosted by Bill Apter & Gordon Solie featured clips of matches from the inaugural event.

The second was a Turner Home Entertainment release entitled War Games The Match Beyond: Bash 87.  The tape was 125 minutes in duration and featured the complete War Games 1 & 2 and other complete matches and match highlights.  I remember watching tape over and over again making me dad rent it for me almost every time we rented movies. 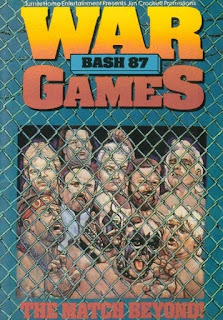 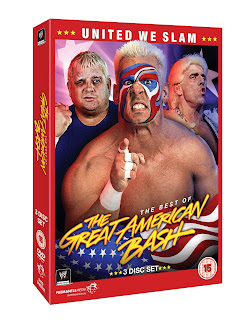 Later Readers!
Posted by Michael J. Labbe at 5:45 AM