WARNING THERE BE SPOILERS AHEAD

Here is my review of the ROH TV Taping on June 24, 2017 in Lowell, Massachusetts

Future of Honor Match: Tough Guy Inc.: Bob Evans & Tim Hughes defeated Cam Zagami & Josh Briggs
Decent match but nothing really special. Evans is terrible as a face and even worse when his trying to be somewhat of a comedy guy. Hughes took the beat down. Zagami accidentally hit Briggs which pissed of Briggs and the arguing cost them the match.
5/10

In Ring: Christopher Daniels and Frankie Kazarian come out and rip into the crowd because traders. They said the crowd was ecstatic when Daniels won the title but quickly turned on him for the new flavor of the month. They called the crowd a buch of assholes. Daniels says the he is only out for whats best for The Addiction from here on out and he wants his rematch. Then said that when he wins the title back he will quit ROH and defend the title all over the world. 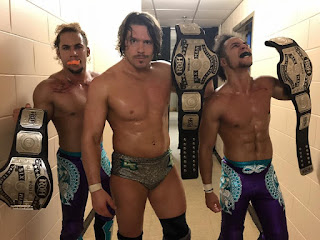 Match 1: Six Man World Tag Team Champions: Dalton Castle & The Boys defeated Coast to Coast: Leon St. Giovanni & Shaheem Ali and Flip Gordon
This was a great 6 man tag match. I'm really starting to like Coast to Coast. Lots of fast paced action with a bunch of dives to the outside. Castle got the win after a Bang a Rang on LSG.
7.75/10

Match 2: Matt Taven w/TK O'Ryan & Vinny Marseglia defeated Ultimo Guerrero
Another great match with lots of action and a buch of ringside battling that went into the crowd. TK and Vinny tried may times to get involved with Vinny paying for it. Taven got the pin after a referee distraction. Check this match out its good.
8/10

Match 3: The Motor City Machine Guns: Alex Shelley & Chris Sabin defeated War Machine: Warbeard Hanson & Raymond Rowe
I wasn't sure what to expect from this one because of the size difference but I was plesantly surprised. This turned out to be a good tag match and a solid main event. Tons of double team moves and lots of fast paced action. I was surpised to see the Guns get the win considering War Machine was in the tag title match the night before.
7.75/10

Women of Honor Match: Kris Wolfe defeated Sumi Sakai
Solid match with a bunch of stiff action. There was a slightly scary moment when Sakai appeared to have her head crushed under the weight of Wolfe.
6/10

In Ring: Cody Rhodes comes out and celebrates his title win with the crowd. He praises them for cheering him and then buries Sinclair Broadcasting and ROH for not addressing him as champ or Mr. Rhodes. Cody then basically says that Daniels is a whiner but he will get his title rematch and it will be 2 out of 3 falls.

Match 4: Punishment Martinez defeated Jonathan Gresham
This was kind of awkward because Gresham is legit half the size of Martinez. Gresham worked the leg throughout the match and Martinez did a crappy job of selling it. At one point the battle spilled to the floor and Gresham took a brutal powerbomb on the ring apron. Martinez got the win with his sitout chokeslam. This match went about 3-4 minutes to long.
5.75/10

In Ring: Punishment Martinez continued to beat up Jonathan Gresham after the match until Jay White came out to make the save.

Ringside: After the match The Cheeseburger fans jumped the rail and mobbed the Cheeseburger. The ROH crew pulled them off and then Will Ferrera, who was disguised as a crew member, attacked Cheeseburger and then fled through the crowd. Why is ROH wasting time with this Cheeseburger crap?

Match 6: Bullet Club: Hangman Page and The Young Bucks: Nick & Matt Jackson defeated The Briscoes: Jay & Mark and Bully Ray
This was an awesome match. Check this out. The end came when Marty Scurll came out and wrecked one of the Briscoes with his umbrella and Hangman Page fell on him for the win.
8.75/10

Ringside: The Brisoces were pissed that they lost. They trashed ringside and beat up the ROH Crew.

Ringside: Mikey Webb was coming out for a match when Shane Taylor attacked him from behind.

In Ring: The Young Bucks and Hangman Page come out and the Bucks say that there isn't any competition in the Tag Team Division. They then challenge Dalton Castle and The Boys to a 6 Man Tag Team Title match. Then they introduce Marty Scurll.

Match 7: Marty Scurll defeated Josh Woods, Will Ferrera, El Terrible, Frankie Kazarian and Vinny Marseglia w/Matt Taven and TK O'Ryan in a in a 6 Man Mayhem Match
Good match with a bunch of crazy free for all action. Scurll basically just hung out at ringside and the only time he got it was to break up a pinfall. Midway through the match, Shane Taylor came out and beat the hell out of Josh Woods, causing him to be helped to the back. In the end Kazarian hit a cutter on Marseglia but Scurll came in and threw out Kazarian and picked the bones for the win.
7/10

Match 8: The Beer City Bruiser w/Silas Young defeated Brian Milonas
Good big man match. The more I watch The Bruiser the more he impresses me. At one point Milonas caught The Bruiser and held him before he hit a World's Strongest Slam. The Bruiser got the win with a Frog Splash.
7/10

In Ring: Silas Young said it had been 29 days since anyone had seen Jay Lethal in ROH. He was holding a lost work sign that said the same thing.

Match 9: TV Champion: Kushida defeated Jay White to retain
Great match with tons of back and forth action. I could see Jay White winning the TV title. Hes a great wrestler. Kushida worked the arm the entire match and almost got the win with a kimora. In the end Kushida got the win with a small package driver.
8/10

On Stage: Silas Young and The Beer City Bruiser come out with the lost work sign and they say that its now been 36 days since anyone had seen Jay Lethal in ROH.

Women of Honor Match 3: Karen Q defeated Deonna Purrazzo and Kelly Klein in a Triple Threat Match
Good solid women's match. Karen Q continues to improve and after this match is on my list of women's wrestlers that I look forward to seeing. Kelly Klein on the other hand, I don't see what many others do. She didn't impress me at all. Karen Q hit a bunch of high flying moves including a suicide dive and in the end she got the surprise victory with a surprise roll up. On a side note, Karen Q had one of the worst titantron videos I have ever seen. It was just a bunch of Qs.
6.75/10

In Ring: Silas Young and The Beer City Bruiser came out with lost work sign and changed it to 43 days since anyone had seen Jay Lethal in ROH. Jay Lethal then comes out and wrecks both Silas and The Bruiser. He went to use The Bruiser's Keg as a weapon but the ROH Crew broke it up.

Match 10: ROH World Heavyweight Champion: "American Nightmare" Cody Rhodes defeated Christopher Daniels in a 2 out 3 Falls Match to retain
Great main event and better than their Best in the World match. Rhodes got beaten up for most of the match and at one point, after he was thrown into the guardrail, the match was paused while someone came out to check on Rhodes. Rhodes fought back and hit a sick top rope armdrag. Kazarian then came out and threw in a chair. Marty Scurll then came out and attacked Kazarian and the fought to the back. Daniels tried to use the chair but Rhodes got a surprise roll up to win fall 1. Daniels then attacked Rhodes with the chair and he fell to the outside. He was almost counted out but made it back in at the count of 19. A few minutes later Rhodes hit Cross Rhodes to win the 2nd fall and win the match 2-0.
8.5/10

In Ring: The Young Bucks, Marty Scurll and Hangman Page come out to celebrate Rhodes' victory.

Overall the TV Taping scored a 92.25 out of 140 for an overall score of 65.89%. This was good set of TV Tapings with a ton of good wrestling with Bullet Club vs. The Briscoes and Bully Ray being the standout match. They taped 5 episodes with the Women of Honor matches being their own episode. Oddly their weren't any commentators at ringside or up on stage.

Later Readers!
Posted by Michael J. Labbe at 6:17 AM