A quick review of my Summer of Rasslin'

My love and passion for wrestling has not changed, but apparently my passion for blogging has.  Back in May I made a few new posts, but then haven't written anything at all since then.  It's not that I have nothing to say, or haven't been to any shows, it's just haven't wanted to write anything.  It's not just on this blog either.

In May I went to my first all death match wrestling show in ICW No Holds Barred where we stood up against the ring for the show and I got a couple pieces of glass stuck in me.  On the way home I found a piece of glass in my ear, and the next day a piece embedded in my arm.  Also in May I hit up Let's Wrestle and Limitless Wrestling.
In June we traveled to Webster, Mass for Big Time Wrestling where FTR managed by Bret "Hitman" Hart defeated Brock Anderson & Brian Pillman Jr. Managed by "Enforcer" Arn Anderson.  What a fun show and to see FTR with Hart was bad ass.
July was two huge shows in four days. First up was the return of Ring of Honor in Lowell, Mass and the Death Before Dishonor PPV!  I bought a ticket on presale day but was on the fence about going, I managed a Front Row seat and when I got to the venue I found out I was right next to the ring announcers.  It was OUTSTANDING! Main event was FTR vs. Briscoes in a two out of three falls match where FTR retained the ROH World Tag Team Championships, Meltzer gave it 5 stars.  It was so friggin good, just amazing!  I'm so glad I went to that show.
Four days later we headed to Worcester, Mass for AEW Dynamite and another awesome night of professional wrestling.

This Saturday I return to Limitless Wrestling and the 2022 Vacationland Cup.  I really can't wait to go to my first live rasslin in a month!

Thank you for reading, please leave a comment, check out my other posts, and if you want like my blogs Facebook page.  You can also head over to Amazon and pick up a copy of my new book Limitless Wrestling: The First Five Years, or any of my other books as well.

Posted by Michael J. Labbe at 9:17 PM No comments:

This past Saturday, I attended Deadlock Pro Wrestling's Believe the Hype at the James E. Holshouser Building at the NC State Fairgrounds in Raleigh, North Carolina. This was my first DPW show and the organization itself is relatively new. They ran their first show at the end of 2021 and have been running monthly ever since. Their shows are broadcast on DPW on Demand and the organization is getting a reputation of bringing in incredible Joshi talent along with some other quality international talent. 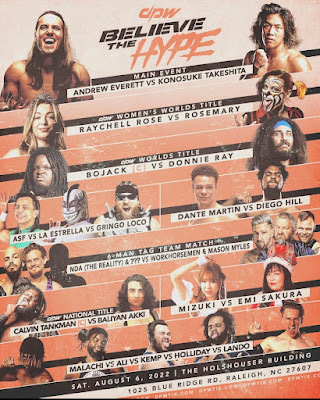 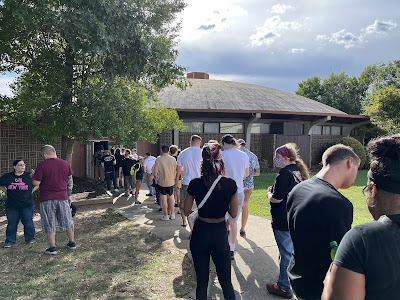 I was happy with the location since it's around fifteen minutes from my apartment. However, the James E. Holshouer Building is not a popular building on the Fairgrounds campus and Apple Maps directed me and some other fans to a building on the other side of the Fairgrounds. Using a map of the Fairgrounds, we were able to find the building which sits back a little and off the main drag of the more modern buildings closest to where they hold the weekly flea market.

There was a nice line outside the venue when we arrived right at 5:30 when the doors were scheduled to open. I was impressed with the organization, as what seemed to be wrestling students were checking tickets and putting on different colored armbands based on whether you were on the front row or general admission. 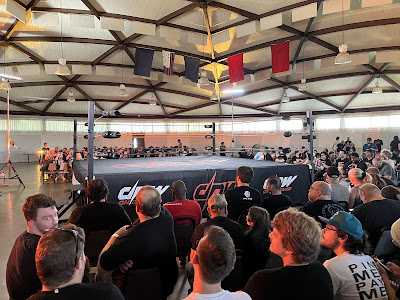 The doors didn't open on time, but we made it in around ten minutes late and quickly found some seats. I sat camera side because I knew DPW was known for dives towards the camera and everyone scattering from their seats. I wanted the full experience, and I was not disappointed with my decision. 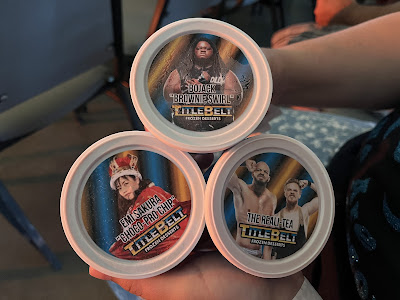 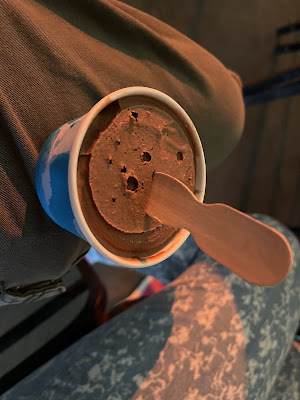 Title Belt Frozen Desserts, a vegan ice cream company out of Charlotte, had brought show specific flavors to the event. My wife has a beef and pork allergy which also affects her consumption of dairy, so finding vegan ice cream at a wrestling event was wonderful. It was also needed since the venue didn't seem to have air conditioning and it was incredibly hot inside.

There was a meet and greet at 5 PM which was $30. The tickets said you could meet the wrestlers of DPW and get a poster signed. It wasn't clear if photos and autographs were included so I reached out to DPW before the show and never heard back. So, I decided against paying the $60 for the both of us. I was shocked when I got inside and saw tables set up but no wrestlers around. I assumed some would still be out for photos and autographs, but they weren't.

Apparently, they needed more chairs, so the show started thirty minutes late. For almost an hour, we all just sat in the heat with no wrestlers to meet and nothing to really do. It wasn't terrible, but it also wasn't ideal. After the organization I saw outside, I expected a bit better.

Once the show began, it was announced the first event was a World Title match between champion Bo Jack and challenger and Donnie Ray and the place erupted. I'm not kidding you when I will say I don't think I've ever been to a wrestling show where the crowd was so hyped up. It was insane and incredible. Even my wife turned to me and said, "Wow! They are hyped!" 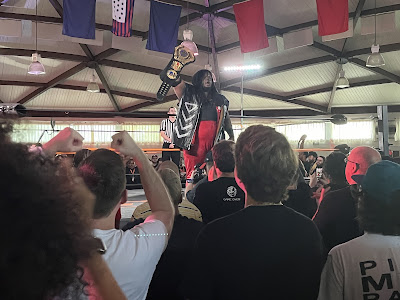 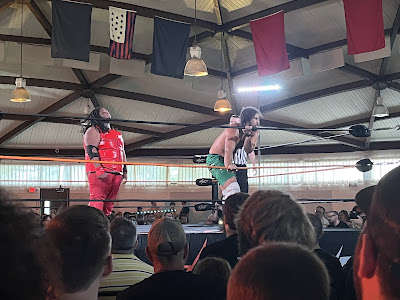 The match was solid, with BoJack retaining his belt and then cutting an open challenge promo and acknowledging how hot it was and how us fans had to be suffering. The room kept getting hotter with the lights and more people piling in. I'm not sure how thought it was a good idea to book an air conditioner less building in August in North Carolina, but it wasn't the wisest. 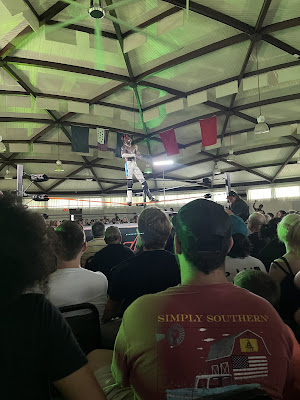 The second match was a five-man scramble between Malachi vs. Ali vs Kemp vs. Holliday vs. Lando, a bunch of wrestlers I didn't know. And you know what, they were amazing! It was hard hitting, high flying, and over-the-top fun. This was a group of talented young guys who were absolutely wonderful in their match. Malachi got the win with an incredible cutter and accepted BoJack's open challenge for next month's event. Actually, he dared his ”fat ass” to wrestle him next month. 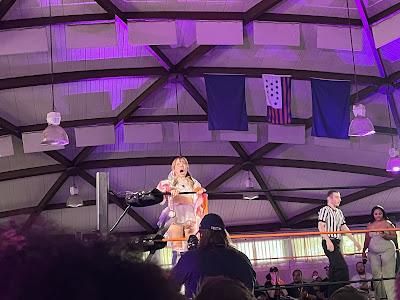 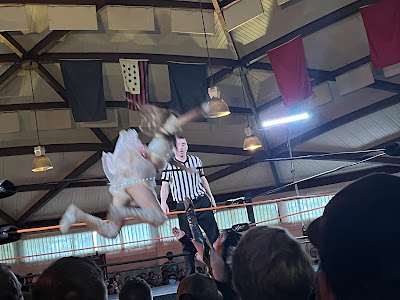 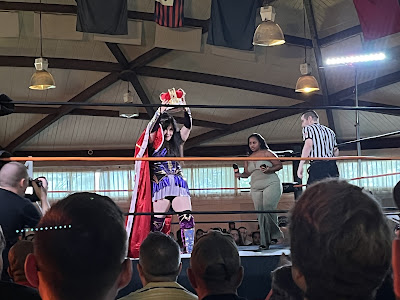 Mizuki took on Emi Sakura in an incredible match. Both women impressed with solid offense in a traditional Joshi style match. It was fun and a honor to see in person. Emi Sakura stole the win but Mizuki was begged by the fans to "Please Come Back." 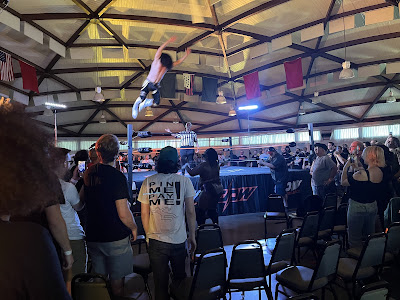 The match I was extremely excited for came up next which was Calvin Tankman vs. Baliyan Akki. Sadly, this match never seemed to connect and there was a lack of chemistry. At one point the match seemed to be picking up as Akki was going to make a huge dive onto Tankman but he missed and had to scramble back up and try again. It was a disappointing. 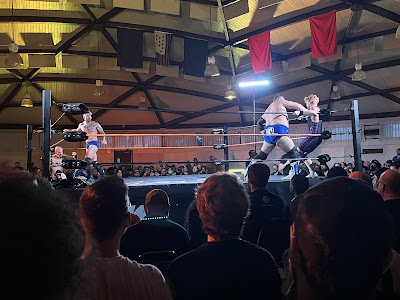 Next up was NDA (The Reality) vs. The Workhorsemen. This match started off strong with JD Drake laying in some of the hardest slaps I've ever heard. The match was a solid, old school tag match that was dragging out a bit long. It was during this extended period that I realized we had been at the event for almost three hours. We'd seen two hours’ worth of wrestling and I was drenched in sweat. The drink machines were out of drinks and the little concession stand wasn't much better. So, despite enjoying the heck out of the show and the atmosphere I made the decision to leave. I have absolutely no regrets about my decision. 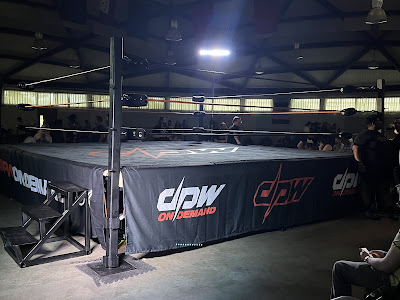 My first half of my first DPW show was damn good. Arguably, it was the best first half of any independent show I've ever been to, and the biggest names of the night still hadn't appeared. The fanbase is loyal and rabid and that makes for a great atmosphere for wrestling.

I haven't had the opportunity to attend many events the past year and this was a true delight. I do wish the venue was air conditioned and everything ran on time, but overall, my first DPW experience was very positive. I will be back.

Posted by Brandon at 4:46 PM No comments: