Until the last few years the women's wrestling scene in the United States had been treated like a side attraction instead of a featured contest.  There were times in the WWE like in the mid 1980's with the Rock N' Wrestling era of Wendi Richter or early 1990's with Alundra Blayze where it was a strong mid-card attraction.

The American Wrestling Association revived their Women's Championship in 1984 until the promotion folded featuring Candi Devine, Sensational Sherri, Wendi Richter and others.  It was also around this time that several women's promotions started popping up such as GLOW, POWW, Delta Tiger Lillies, LPWA, and others.

Jim Crockett Promotions and later World Championship Wrestling attempted their own run at a women's division on a few occasions with minimal success.

In 1986 Misty Blue was brought in, billed as the Women's United States Champion she wrestled Linda Dallas a dozen times and Kat LaRoux once in matches featured at house shows in February, April, & September.  She also made a single television appearance on the September 6, 1986 episode of WCW World Wide.

In February and March of 1988 Misty Blue, Linda, and Kat were back for a few house shows.  December 12, 1988 her whole troupe of girls made it to the WTBS studios in Atlanta for the World Championship Wrestling televisions tapings.  January 1989 they worked two house shows.

In September 1990 now under the Ted Turner WCW banner Women's Wrestling returned to TBS with a different group of ladies.  Bambi defeated Peggy Lee Leather on Worldwide and lost to LPWA Women's Champion Susan Sexton at Clash of the Champions XII in Asheville, North Carolina.  The two also faced off four house shows.

February 24, 1991 at Wrestle War 91 in Phoenix, Arizona live on Pay-Per-View, WCW introduced to the world of Joshi Puroresu.  The ladies of All Japan Women's Pro-Wrestling; Itsuki Yamazaki & Mami Kitamura defeated Miki Handa & Miss A when the former Jumping Bomb Angel Yamazaki pinned Miss A.  The four ladies faced off at two house shows in Chicago and Georgia prior to the PPV with Miki and Mami switching teams.  Miss A is better know as Dynamite Kansai.

These ladies wow'd this crowd as until this time they had never seen women's wrestling like this before.  Hard hitting, fast paced, and exciting the crowd got behind them.

Later that year in October Misty Blue, Linda Dallas, Kat LaRoux, & Black Venus returned for four house shows in Virginia, Maryland, and Pennsylvania.  It would be there last tour in WCW.

Madusa has been in WCW as a valet for Rick Rude since 1991 and although she never competed in a women's match she did face Paul E. Dangerously in a series of 5 Minute challenges in November and December of 1992.

At World War III Pay-Per-View at the Norfolk Scope, November 26, 1995 women's wrestling returned to WCW for the first time in four years.  Once again they featured the stars of Joshi Puroresu in a cross promotional battled.  Bull Nakano & Akria Hokuto of All Japan Women's Pro-Wrestling defeated Cutie Suzuki & Mayumi Ozaki of JWP.  The next night at Monday Nitro in Salem, VA the two teams faced off again with Nakano and Hokuto once again gaining a victory.

Many wrestling fans will remember Nakano as a former WWE Women's Champion and her matches against Madusa who was known as Alundra Blayze in the promotion.

On December 18, 1995 Madusa showed up on Monday Nitro throwing the WWF Women's Championship in the trash.  Madusa would not return to WCW television until January 29, 1996 when she would lose to Sherri Martel in a short match on Nitro.  Madusa then had a series of matches with Col. Robert Parker in March and April.

In June of 1996 WCW really started stepping up their women's division with Madusa wrestling the likes of Bull Nakano, Akira Hokuto, Debbie Combs, Malia Hosaka, and Leilani Kai.  She even faced Nakano at WCW Hog Wild PPV in Sturgis, South Dakota on August 10, 1996.

November 1996 WCW teamed with the GAEA promotion from Japan to promote a tournament for the WCW Women's Championship.  Akira Hokuto defeated Madusa in the finals of the tournament to win the Championship at Starrcade December 29, 1996 in Nashville, Tennessee.

WCW and GAEA would also crown a WCW Women's Crusierweight Tournament that was won by Toshie Uematsu on April 7, 1997 in Huntsville, Alabama on WCW Main Event.

The Women's division in WCW from June 1996 until June 1997 was featured on Pay-Per-Views and Monday Nitro occasionally, however the weekend and syndicated shows heavily featured matches from both divisions including tournament matches.  The Women's division essentially came to and end on June 15, 1997 at the Great American Bash when Madusa lost a career vs. title match to Women's Champion Akira Hokuto. This would be Hokuto's last match in WCW.  Later in 1997 the WCW Women's titles were abandoned.

I re-watched that match at the Bash between Madusa and Hokuto was a damn good match.  Hokuto with a relentless onslaught and Madusa fighting back from the bottom until a knee injury slowed her down, but she wouldn't quit and continued fighting.  It was great!  The only downside was Bobby Heenan on commentary talking about how'd he never seen a women take such a beating and fight so hard, and ect. 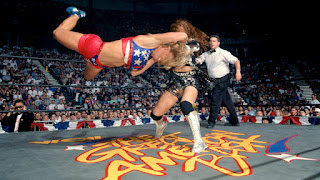 Madusa would return to WCW in 1999 as part of Randy Savages entourage.  At this point the women in WCW were treated as eye candy and only had the occasional match which was usually a mixed tag, evening gown or other gimmick.

Madusa herself would go on to have matches with several male wrestlers like Benoit, Meng, and even defeating Evan Karagias for the Cruiserweight Championship.  However she did have a few matches with actual women wrestlers like Mona (Molly Holly), Rhonda Singh, Sherri Martel, and Patty Stone Grinder (Leilani Kai).

The best years in women's wrestling for WCW was in 1996 and 1997 but they needed to use Japanese talent to do so.  Also it seems that when it got to it height it just disappeared.  I very pleased that today women's wrestling is where it is on the independents, on the national scene, and around the world.

Later Readers!
Posted by Michael J. Labbe at 5:01 AM