The Second WCW Run of The Public Enemy

Many people are well aware of the tag team The Public Enemy: "Flyboy" Rocco Rock & Johnny Grunge.  They helped revolutionize the early days of ECW becoming four time tag team champions from September 18, 1993 to January 5, 1996.  The jumped to WCW in January 1996 to September 1998 winning the WCW tag team championships.

In 1999 the team returned to the land of the extreme wrestling The Dudley Boys to a no contest at House Party 99 on January 16th at the ECW arena.  They were supposed to make more appearances in ECW but cancelled them when they signed with the WWE for their disastrous run in that promotion. 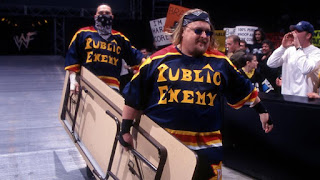 Many fans, myself included, forget that the duo made a return to World Championship Wrestling in the summer of 1999 returning at Bash of the Beach pay-per-view and exiting just over a month later.

July 11, 1999 Bash at the Beach Ft. Lauderdale, Florida
Competed in a hardcore junkyard invitational that was won by Fit Finlay.

This was the teams surprise return to WCW after a ten month absense. 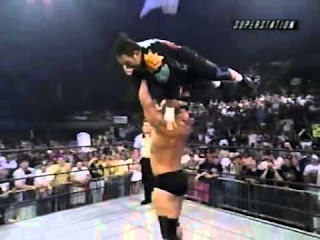 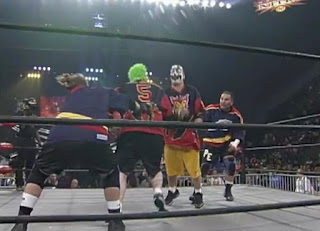 1999 was an interesting year for The Public Enemy.  They started the year in ECW, had a brief run in WWE, held the NWA World Tag Team Championships for two days in June, returned to WCW in July and August, and finished the year working for the California based XPW. 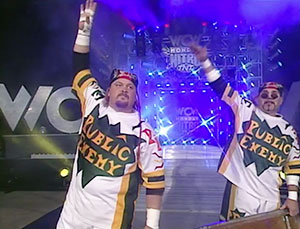 Sadly both members of the team have since passed away, Rocco Rock in 2002 and Johnny Grunge in 2006.  I was always a fan of them, in-fact they main evented the first ever Indy show that I went to, March 16, 1997 at Edward Little High School in Auburn, Maine, they defeated Dave and Dean the Power Twins with the Drive By through a table.  My buddy Jay actually brought home half the table as a souvenir.

Later Readers!
Posted by Michael J. Labbe at 4:30 AM