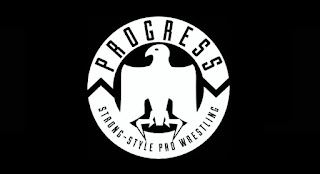 I had of heard of Progress Wrestling before and have watched many clips and matches on the internet in the past but I had never watched a complete event before.  Recently I got a one month subscription to the Highspots Wrestling Network so I could watch the CZW Once In a Lifetime event featuring Matt Tremont vs. Atsuhi Onita in a barbed wire exploding bat match. 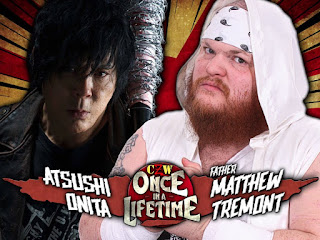 Sadly the match, as well as the event, was a bit of a disappointment for me.  I decided to check out what else Highspots had to offer and it has a lot indeed!  Wrestling events from promotions around the world, classic and vintage wrestling footage, and some fantastic documentaries including Ellbow Productions releases.

For me though it was finally my chance to check out some complete Progress Wrestling events.  I started out big with the 2017 Super Strong Style 16 Tournament.  A tournament held over three days this past May at the Electric Ballroom in London. 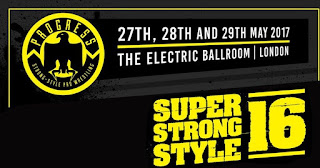 The talent in the tournament is no doubt the future of wrestling not just in the UK but around the world.  Zack Gibson, Jack Sexsmith, Zack Sabre Jr. David Starr, Jimmy Havoc, Travis Banks, Mark Andrews, Flamita, Tyler Bate, William Eaver, Mark Haskins, Flash Morgan Webster, Matt Riddle, Trent Seven, Nathan Cruz, & Jeff Cobb.  Several of these men have already appeared in the WWE and I wouldn't be surprised to see more of them signed by WWE in the future.  The weekend also featured Progress World Champion Pete Dunne amongst others.

I was blown away by Progress's product and I'm not just talking about the in ring talent.  The production value with the multi-camera set up, commentators, entrance music, and set is top notch.  One of my favorite things is how they opened the show with the ring announcer Jim Smallman in the ring talking to the fans.  Night one he asks all who traveled from another country to be at the show to stand up and then asks each one where they are from.  Night two he asked all who wasn't at night one to stand up and then demands to know why they weren't there.  Some pretty awesome fan interaction.

One of the best matches of the show was on night one between Zack Gibson and Jack Sexsmith.  The story they told in the match with Jack being the underdog having to constantly battle back from underneath against Gibson and then getting the upset win.  It was amazing!  The crowd exploded and I'm not ashamed to admit that I jumped off the couch with excitement applauding the television with a tear in my eye. It was sincerely a truly fantastic moment in wrestling. 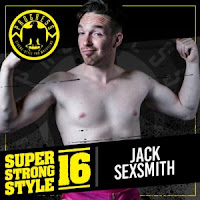 The results to the tournament and non-tournament matches are out there, but I'm not going to spoil them here.  You need to go out of your way to watch this tournament yourself.  You can find it on either the Highspots Network or Demand Progress their own streaming service.  They both have Roku channels as well.

Highspots is $9.99 a month with thousands of hours of various wrestling to watch, but are a few months behind on the current Progress content.  Demand Progress is $7.49 a month and they typically post their most recent show a week after the event occurs.  Demand Progress also features events from four other wrestling promotions.

I have firmly jumped on the Progress band wagon and am excited about the fact they have started running shows in the United States.  They ran a show during WrestleMania weekend in 2017 and again will be in 2018.  Also this past August they had a show in New York and Boston which both sold out very quickly.  I was not able to make it to the Boston show this time but I am not missing out when they return.