Theme songs have become a very important part of wrestling.  A simple guitar riff, the sound of glass breaking, or spoken words can pop a crowd into a frenzy of boos or cheers.  Everyone has their favorites, for me it's too hard to pick just one.

The WWE is well known for creating some of the best original music for their wrestlers, where as other promotions used radio songs, and WCW was known for using instrumental covers in a different key.  On a few occasions though the WWE would re-use theme songs and sometimes they would become so well known for that superstar that people would forget that someone else had it first. 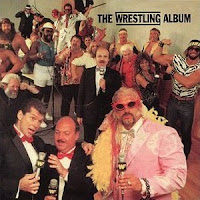 WWE's first music release was The Wrestling Album in November 1985 commentary was provided between the tracks by Vince McMahon, Jesse "The Body" Ventura, and "Mean" Gene Okerlund. 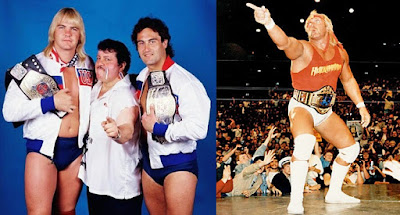 This commentary revealed that Rick Derringer's "Real American" was written for the tag team duo of Mike Rotundo and Barry Windham the U.S. Express.  However we all known that it was Hulk Hogan is who ended up using the tune.

Kurt Angles iconic theme music "Medal" by Jim Johnston could not fit the Olympic gold medalist better.  Fans even took to chanting "You Suck" to the melody of the tune.  However in 1997 The Patriot Del Wilkes used it first during his short run in 1997.

The Rockers debuted in the WWE in 1988 breaking up in the infamous Barber Shop incident in December 1991 (aired January 1992).  During that time they used a happening tune called "Rockin' Rockers".  Jannetty would use it during his solo run and as The New Rockers with Al Snow's Leif Cassidy. 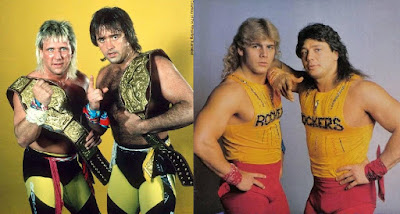 In 1998 The Rock N Roll Express returned to the WWE as part of the NWA Invasion angle during that time frame they would use "Rockin' Rockers" as their entrance music.

Fatu was repacked as The Sultan debuting in 1996 with and The Iron Sheik & Bob Backlund as his managers.  He had what I think is one of the best themes, "Desert Heat" I don't know why I just really dig it.  The Sultan left in January 1998 and shortly after Fatu emerged as one of the Headshrinkers.

Tiger Ali Singh debuted in 1997 as a blue chipper similar to that of the Rock.  After a handful of matches in 1997 he left television.  When he returned in mid 1998 he was repackaged as an arrogant aristocrat and he began using "Desert Heat"as his entrance music.  Later after Singh left the WWE in 2002 whenever The Iron Sheik would make an appearance they used Desert Heat for him.

Jim "The Anvil" Neidhart needed a partner after Bret won the Intercontinental Championship.  Turning to another brother-in-law Owen Hart they formed The New Foundation debuting in December 1991 teaming until February 1992.  The theme music they used penned by Jim Johnston was called "Wrecking Crew". 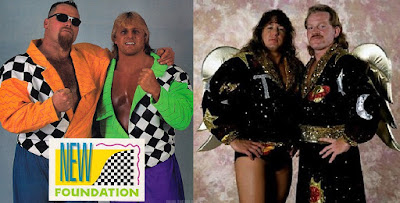 The Heavenly Bodies: "Gigolo" Jimmy del Ray & "Doctor of Desire" Tim Prichard teamed in the WWE from 1993 - 1995 and also used this as their theme.  They are the ones that I most associate the theme with.

WCW did this a lot too except is was mostly generic canned music that they had in the turner library.  For instance at Slamboree 1994 when Tully Blanchard wrestled Terry Funk, Blanchard's ring music that night is the same that Chris Jericho used when he debuted in WCW in 1996.

Later Readers!
Posted by Michael J. Labbe at 5:40 AM