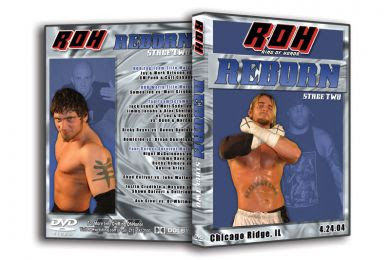 Earlier in the Day: Bryan Danielson takes Samoa Joe's place in Samoa Joe's Ring. Apparently this is a segment where Joe teaches wrestling moves. Danielson is teaching a proper wristlock when Homicide comes out and does his version, which includes a a forearm shot to the trainees face. Homicide then says he is out for Joe's blood but since Joe wasn't there (Homicide threw a fireball in Joe's face the night before) Danielson would do just fine. Danielson said he would stretch Homicide like nobody ever had before.

Backstage: Nigel McGuinness interrupts Matt Stryker's interview time with Dave Prazak and thanks him for a great match last night and wishes him luck in his ROH Title match against Samoa Joe. Stryker says he knows Joe is hurt and his strategy is to work Joe's legs.

Backstage: Becky Bayless wants to know where Special K is. Jack Evans comes in a does some break dancing.

In Ring: BJ Whitmer and Ace Steel are in the ring ready for a match and The Briscoe's come out and attack Steel giving him a spike Jay Driller. They then run down the crowd. CM Punk and Colt Cabana come out and take the ring. While Cabana is checking on Steel, Punk says the tag team main event is going to be like other great Chicago battles like Hart vs. Austin. The Briscoes then drag Punk to the outside and start beating him up. Cabana the does a moonsault onto them and the fight is on. BJ Whitmer then comes in and says he came for a fight and demands the match starts. Steel obliges.

Match 1: BJ Whitmer defeated Ace Steel
This was a decent match but nothing really more. Whitmer worked the injured neck of Steel, causing Steel to never really be able to gain the advantage. After the match Whitmer annihilated Steel with a chair shot to the head.
6/10

Match 2: The Carnage Crew: Masada and Justin Credible defeated Delirious and Shawn Daivari
Kind of an average tag match. Nothing special here. This was Daivari's ROH debut. I never knew he wrestled in ROH. The end came when Credible hits Thats Incredible on Daivari then a superkick on Delirious. Masada then hit a Cradle Backbreaker on Delirious for the win.
5.5/10

Match 3: Chad Collyer defeated John Walters
Awesome technical match. Great back and forth action. Collyer got the win with kind of a surprise roll up. Check this one out, I really enjoyed it.
8.5/10

Match 4: Nigel McGuinness defeated Austin Aries, Jimmy Rave and Rocky Romero w/Ricky Reyes in a Four Corner Survival Match
Good match with nonstop action throughout. Rave took a beating for most of the match. McGuinness got the win with a Keylock on Rave when Romero and Aries were battling and lost track of the match.
8/10

Match 5: Homicide defeated Bryan Danielson
Good match. Danielson seemed to dominate in many portions due to his advantage in submission wrestling. He worked Homicide's hand for most of the match. Homicide got the win with a Lariat after he hit a low blow on Danielson when the referee was out of position.
7.75/10

Backstage: Jimmy Rave and Jack Evans interrupt Matt Stryker this time to wish him luck. Prazak announces that Joe still hasn't arrived and if he doesn't Stryker will be awarded the ROH Title. Stryker says he doesn't want to win that way. Chad Collyer interrupts and says that Stryker can just hand over the title to him because Stryker has never beaten him.

Match 6: Ricky Reyes w/Rocky Romero defeated Danny Daniels
This was really average and they only gave it about 6 minutes. ROH didn't really seem to care about this match considering they interrupted it to tell us that Samoa Joe had arrived at the building. Reyes got the win with an ankle lock variation.
5/10

Match 7: Jack Evans and Matt Sydal w/Daizee Haze defeated Alex Shelley and Jimmy Jacobs
The Carnage Crew: Tony DeVito and HC Loc and The Ring Crew Express (Dunn and Marcos) in a Tag Team Scramble Match. Great match with tons of fast paced action. Check this one out. The end came when The Carnage Crew killed Jacobs with a 2nd rope piledriver but Evans snuck in and hit a 630 for the win. After the match Shelley turned on Jacobs, blaming him for the loss and walked out.
8.75/10

Match 8: ROH Champion Samoa Joe defeated Matt Stryker to retain
They built this a being a big match and its Matt Stryker who is getting the title shot. Why? He is a decent wrestler but he looks like shit with the stupid uni-brow. Joe beat the piss out of him for about 19 minutes and got the win with a Triangle Armscissors. After the match Joe tells the camera man to tell Homicide to meet him in back to settle things.
6/10

Backstage: Alex Shelley hypes Generation Next and tells Jimmy Jacobs he doesn't need losers like him hanging around.

Match 9: The Second City Saints: CM Punk & Colt Cabana defeated Tag Team Champions: The Briscoes: Jay & Mark to win the titles
Awesome match with The Saints getting the huge hometown reception. There wasn't any commentary. I usually hate watching wrestling on TV with no commentary but this one had my attention the entire time. Great action throughout. The end came when Punk hit a Pepsi Plunge on Mark that appeared to have Mark land directly on top of his head. I had to rewind this and watch it again. Check this match out, its great. After the match BJ Whitmer comes out and attacks Punk. Ace Steel comes out and destroys Whitmer with a chair shot to the head. Then all 3 of The Second City Saints celebrate the victory.
9/10 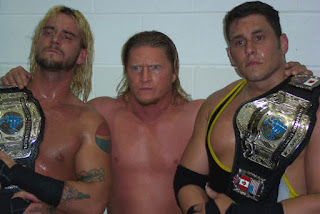 Backstage: Joe invites Homicide to fight him in the bathroom. Homicide accepts the challenge.

Backstage: The Carnage Crew says that since they didn't figure out who took a dump in their gear bags a few months ago that they would go to the strip club.

Backstage: They have a camera outside the bathroom where Joe and Homicide are battling, and yes they are still battling.

Backstage: Punk tries to cut a very serious promo but Cabana comes in and completely ruins it with a victory celebration.

Backstage: The Cameraman is again outside the bathroom but this time there isn't any noise coming from inside so the decides to go in. We see Homicide face down on the floor and Joe looks dead with his eyes rolled back in his head and blood all over his face.

Overall this show scored a 64.5 out of 90 for a score of 71.66%. This was a very good show that anyone who likes great wrestling should check out. CM Punk did commentary for most of the show which really added to the greatness of the entire show. I really enjoy the Joe vs. Homicide feud and would like to see the entire thing.

Thanks for reading, please leave a comment, check out my other posts and like the Facbook page.

Later Readers!
Posted by Michael J. Labbe at 2:00 AM