Great crowd Friday night, Honky Tonk Man is definitely a draw.  IWE regulars put on a show that will hopefully bring in the casual fans next time.

Match of the night was the second match on the card, a tag team affair pitting BA Tatum & Scotty Reed vs. Cameron Matthews & Bobby Ocean.

IWE needs to bring back Scotty Reed every show, he is VERY talented and could have some great matches with just about anyone.

Honky was, as always, awesome! A true legend in wrestling that can still put on a great show, has great rapport with the fans and deserves our respect. 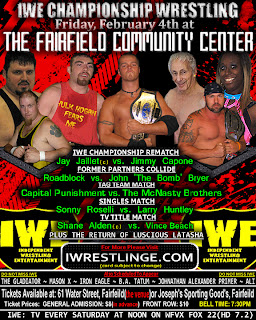