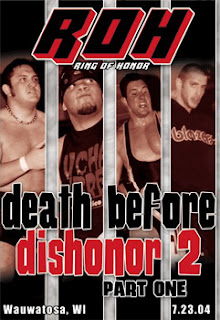 Match 1: Rocky Romero w/Julius Smokes and Homicide defeated Chad Collyer
Awesome opening match and an excellent way to open the show. Great action as well as some great submissions. Collyer is super underrated and its a shame he really never made it on a national level. Check this match out its really good.
8.5/10

Match 2: Alex Shelley w/Roderick Strong and Jack Evans defeated Jimmy Jacobs
Another very good match. Jacobs seemed like an underdog in this one and I found myself wanting him to win. Great back and forth action. They really made it seem like Jacobs had a chance to win. In the end Shelley won with a Border City Stretch.
8/10

In Ring: After the match the rest of Generation Next came in and beatdown Jimmy Jacobs until Ricky Steamboat came out to break it up. John Walters and Matt Stryker came out to even the odds. Which lead to .... 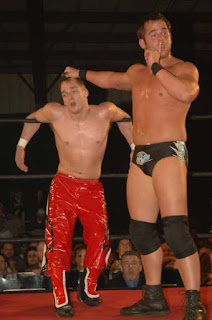 Match 3: Generation Next (Roderick Strong and Jack Evans) w/Alex Shelley defeated John Walters and Matt Stryker w/Ricky Steamboat
This was a decent match but it seemed to be a little one sided to me. Walters got beat down for most of the match. During the comeback Shelley tried to interfere which got Steamboat's attention. This brought out Austin Aries who attacked Steamboat from behind and Shelley joined in. Stryker then went to help Steamboat, allowing Strong to hit a Spinal Shock on Walters for the win.
6.75/10

Match 4: Trent Acid defeated Shawn Daivari, Delirious, The Great Kazushi, Danny Daniels and Matt Sydal w/Daizee Haze in a 6 Man Scramble Match
Good fun match with a ton of action all over the place. A little sloppy, but that happens sometimes in matches like this. Otherwise a good match. Acid got the win with Saving Grace on Daivari.
7.25/10

Match 5: Pure Champion Doug Williams defeated Austin Aries to retain
Solid match, but not a great match like you would expect. This was really kinda slow and boring. I really don't care for the rules of the Pure Title which may cause me to not like many of the Pure Title matches. Williams won with a brutal armbar in the ropes.
6/10

Match 6: Low Ki w/Julius Smokes, Homicide and Rocky Romero defeated Mark Briscoe
This was really one sided with Low Ki getting in most of the offense and hitting some really brutal kicks. Ki also did a great job playing heel. Ki got the win with a Dragon Sleeper. After the match he slapped Briscoe around while the rest of the Rottweilers held him.
6.5/10

Match 7: Homicide w/Julius Smokes, Rocky Romero and Low Ki defeated Jay Briscoe
Solid match that started out really hot but then settled down to kind of an average back and forth match. Homicide got the win with a Lariat. After the match Jay gets similar treatment that Mark received earlier.
6.75/10

Match 8: ROH Champion Samoa Joe defeated Colt Cabana to retain
Since this show was in Chicago, Colt was super over. Good match here with lots of great action. Joe hit a ton of super stiff moves that looked like they killed Colt. Colt tried a comeback but got caught on the top and Joe hit a Muscle Buster for the win. After the match The Rottweilers came out and attacked Joe but The Briscoe's made the save. Afterwards Joe and Colt hug and shake hands.
7.75/10 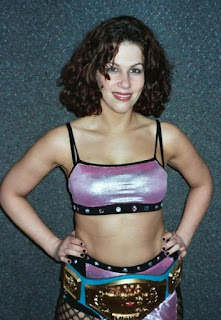 In Ring: Allison Danger comes out wearing a neck brace because Homicide had recently given her a Cop Killer. She blamed her injury on BJ Whitmer and Dan Maff turning on her and quitting the Prophecy. She said that she also hated The Second City Saints and wanted to see both teams get destroyed. She then demanded that barbed wire, ladders and tables be brought out for the next match. She then took a seat near the merch table to watch the carnage.

Match 9: The Second City Saints (CM Punk and Ace Steel) defeated BJ Whitmer and Dan Maff in a Chicago Street Fight
This was the blowoff to a year long feud between these teams that resulted in an awesome match that was very brutal. All four men were bleeding with Whitmer bleeding really bad. Many sick spots with one on Whitmer that needs to be seen. Near the end Maff goes for a chair in the crowd and all of a sudden the entire crowd starts throwing chairs into the ring like in ECW. Ace got the win after a Tombstone threw a table on Whitmer. Check this out, such a great brawl. After the match Generation Next comes out and attacks the Saints. Ricky Steamboat comes out to make the save but gets beat up and duct taped to the ropes and is forced to watch The Saints get beat up.
9.5/10 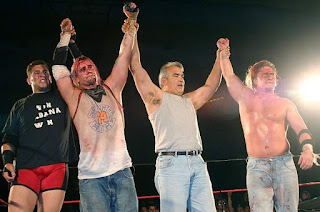 The show scored a 67 out of 90 for an overall score of 74.44%. A great overall show with two really good matches and one out of this world brawl. Check this show out. You won't be disappointed.

Later Readers!
Posted by Michael J. Labbe at 5:07 AM