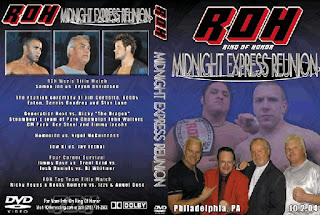 Here is my review of ROH's Midnight Express Reunion on October 2, 2004.

This was a solid match. Nothing really great but solid. This was the first time I've really seen Special K actually hang with another team. Reyes pinned Angeldust after a double guillotine knee drop off the top. After the match Lacey and Becky got into a fight that was broken up the rest of Special K.
6.5/10

This was okay but not really anything special. There wasn't really any of the fast paced chaos you would expect from a match like this, especially with the names in this one. Throughout the match you could hear Allison Danger, who was at ringside, yell to kill Whitmer. She is still pissed that he quit The Prophecy. Prince Nana grabbed the mic, near the end, and was talking about some random shit I couldn't understand. This was enough of a distraction for Rave to get the win with a Rave Clash on Acid. After the match Allison Danger begged the Embassy to kill Whitmer but they left. Then out of nowhere, The Carnage Crew comes out and annihilates Whitmer, but putting a trash can over his head and beating it with baseball bats. They are pissed that Mick Foley called Whitmer and Maff the Ring of Hardcore and not them.
6.25/10

This match continues with the what seems like the theme of the night, a decent match but nothing really more than that. This is the 3rd match I have seen with Low Ki as a member of the Rottweilers and I've decided that he is really boring with the group. He was way better as a bad ass face. During the match Smokes and Ki taunted and even spit on Lethal's mother, who was in the front row. This really fired up the crowd. Ki got the win with a Dragon Sleeper. After the match he hit Lethal with a vicious head kick.
6.75/10

A great technical performance from Nigel but the match was kinda boring because it was so one sided. Homicide didn't really get much offense in but when he did, he did a great job of selling his arm injury. Nigel go the win with a surprise roll up.
6.5/10

A good solid match and I really liked the fact that it went about 35 minutes. I can't stand elimination matches that only go about 10-15 minutes. There is no time to build anything. Jimmy Jacobs took a massive beating and was out first. About 5+ minutes later Ace eliminates Evans after a Spinal Shock. 40 seconds later Aries eliminates Ace after a crucifix bomb. Strong introduces a chair that Punk intercepts but gets caught using it and is DQed. 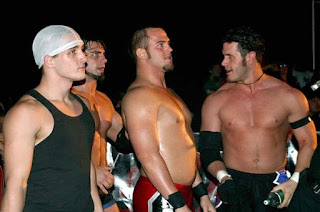 Steamboat gets pissed because he had given a promo about how he hates the garbage wrestling that Mick Foley did and Punk did just that by using a chair. This was a really stupid way for Punk to be eliminated. Walters is left 3 on 1. Walters did manage to eliminate Strong after 3 back stabbers. Strong then tried to introduced a chair again but was intercepted by Steamboat and they battled to the back. Walters then gets dominated by Shelley and Aries and finally goes down after a 450 Splash from Aries. After the match Shelley and Aries argued over who was gonna take the ROH Title from Samoa Joe.
7/10

In Ring: Jim Cornette, Bobby Eaton, Stan Lane and Dennis Condrey come out talk about how much they like working with each other and how great they thought ROH was. Cornette says that the only one missing was Big Bubba. Prince Nana then comes out and says that he has a new member of the Embassy. Out comes Ricky Morton with Jimmy Rave and The Outcast Killers. Morton says that ROH shouldn't be honoring The Midnight Express because they only won the tag titles twice and the Rock N' Roll Express won the 5 times. Not mention The Rock N' Roll kicked their ass the last time they were in Philadelphia. Cornette and Morton then go back and forth with a good verbal battle. This leads to a brawl between The Embassy and The Midnight Express. The Express fight off Rave and the Outcast Killers. Morton the shoves Prince Nana to the wolves so he can make his getaway. The Express then annihilates him with a Rocket Launcher. Cornette then puts on his crown. Good segment. Very entertaining.

Great match. Check this one out. Tons of great techincal wrestling with a bunch of ringside brawling mixed in. Danielson even called Joe a Mother F*cker, which really surprised me. Danielson fought extremely hard but ended up tapping to a Coquina Clutch. After the match CM Punk comes out and says he wants a rematch with Joe because he was the only man that Joe hasn't beaten since he became champion. Danielson then said that Punk's match wasn't as hard as his and he deserves a rematch more. 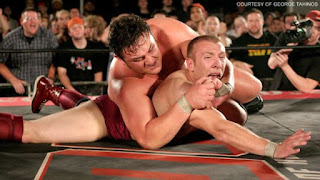 Generation Next then comes out and attacks Punk. Joe and Danielson just watch. Aries got in their faces so they joined in the fight. The Rottweilers then join the fight, taunting Joe with his stolen title belt. The fight continues until Low Ki and Danielson stare down Joe. Danielson then announces his partner will be Low Ki in the match vs. Joe and Jushin Liger.
9/10

Overall this show scored a 42 out of 60 for an overall score of 70%. Check this show out for two things. The Midnight Express segment and the Title match. Both were great.

Later Readers!
Posted by Michael J. Labbe at 6:31 AM