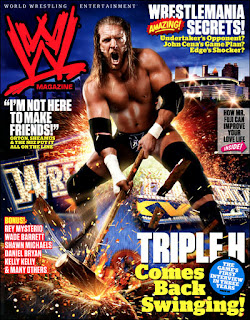 What I have decided to do is take a few moments each month and break down the current issue of WWE Magazine.  I have been a subscriber for over 20 years and have never missed and issue.  I was also featured in the October 2008 issue..too bad Batista was on the cover.

I will not go page by page, but rather break down certain sections of the magazine.

Obviously this month it’s Triple H.  We haven’t seen him on TV or in the magazine since Sheamus took him out last April at the Extreme Rules PPV.  I had anticipated his return at the Royal Rumble, imagining the pop it would receive and generally getting excited to experience the moment live in .  However, it was not to be.

Brawl: by the numbers
Edge is a 6 time world heavyweight champion since he first won it on May 2007 and his most recent title win came December 2010.  That’s 6 times in 2.5 years, during that time frame the title actually changed hands 23 times and was vacated twice.  That is just a ridiculous amount of time.  I know in the History of the WWE Championship book they tried to play off the hot potato title changes as there being so many “super wrestlers” making a long reigning champion more difficult….right.

Superstar Flashback
I really like this section and would like to see some of the road agents tackle it as well, like Dean Malenko, Arn Anderson, and others.

Meet the Rejects – have never liked this or found it funny

My Favorite Finisher
The Camel Clutch – I know wrestling is a work, but this move isn’t!

GCW: Pride of
The other day I was looking at my massive WWE DVD collection.  Some of my favorites are the WCW, ECW, WCCW, & AWA history DVD’s.  I’ve been trying to figure out what other similar history DVD’s that WWE could do as these are the best.  I’ve heard that a Best of Nitro is coming out, that will be great as well.  Here are my ideas for other DVD’s:

Superstars vs… - see Meet the Rejects

Gag Reel – I had forgotten all about this, and for good reason, poor Mean Gene!

Interview with Kaval
It’s a great interview, I’m glad they printed it even though he got his release December 23, 2010

Zack Ryder’s WWE Swag!
A note about the Stretch Wrestlers, I was at the Brunswick Flea Market here in  a few years back.  Someone was selling a loose Ricky “The Dragon” Steamboat one of these.  I picked it up and stretched it about an inch when it exploded and this fine powder that will probably give me cancer went EVERYWHERE!!  It made such a mess, and I was a bit embarrassed as well.

You Got the Mic
I always thought that they should have a fan photo section.  I have this awesome photo of Randy Orton. 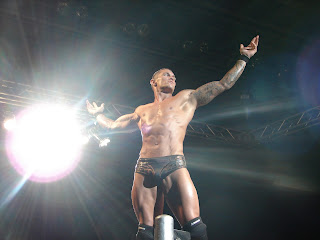 Guess The Match
It’s obviously Randy Orton vs. Batista from Extreme Rules PPV June 7, 2009.  Batista won the WWE Championship.  I am not going to enter the contest though as the prize is snowboarding gear and I would probably win something I have no use for.

Cash for Questions
Goldust does indeed tweet a lot it’s hard to even keep up with them all.  Noticed they are accepting questions to be answered by Randy Orton, Sheamus, & The Big Show.  I’m pretty sure they have all done this section before.  How about Jerry Lawler, William Regal, or Daniel Bryan

Interview with Triple H
Again, I thought Triple H would be back at the Rumble.  I’m glad he enjoys doing the movies and behinds the scenes operations, but I want him back in the ring.  I’m sure he’ll be back for WrestleMania.

My First Championship
I hope this becomes a monthly column, even if it’s just one person a month.  Although they should re-name it My First WWE Championship as I’m positive all of those guys won a championship before some where.  I also would like to see some of the veterans and road agents highlighted as well.

What’s in your travel bag: with Wade Barrett
I like how it’s partially in character this month, but always interesting.

Bobby Heenan DVD advertisement – click the link for my review

“Quote” Them on it – love this section, especially Vladimir Koslov this month

Interview with Melina
Great piece, I would have asked why do you look like you are going to cry after every match?

Last Page
It’s now The Last Thing You’ll Ever See, it used to be You Had to be There, which I liked a lot more.

A couple other columns that have disappeared over the years that I liked are:
Yo, Do you Remember?
My Three Favorite Matches
Vince McMahon’s Warehouse


Did You Buy This?

Later Readers!
Posted by Michael J. Labbe at 4:48 AM

Email ThisBlogThis!Share to TwitterShare to FacebookShare to Pinterest
Labels: February 2011, triple H, wrestling, WWE Magazine, Yo Do You Remember