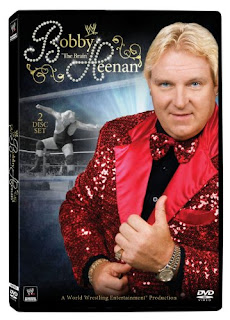 I recently watched the Bobby “The Brain” Heenan DVD.  I was very excited to pick it up as Heenan is arguably the greatest manager of all time.  Over the last few years the WWE’s documentaries have been outstanding.  No matter the topic WWE has always produced a first class documentary.

I expected the same for The Brain, instead though, we get a paltry 50 minutes that was no where near good enough.  Probably because of his throat cancer, but The Brain wasn’t even interview for it.

His entire career was covered, but in very quick fashion.  They glazed over his AWA, WCW, and wrestling career primarily focusing on his WWE time.  Even that though, was skimmed over.  It almost comes off as half-assed compared to what the WWE has become known for.

The extras are decent, promos, interviews, matches, and him as a color commentator.  I would have liked to see some more interactions with Gorilla Monsoon.

All in all it was rather disappointing.