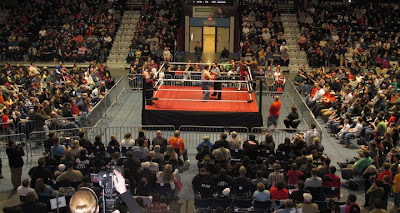 The meet & greet got started a little late, but once it got rolling it went very smooth.

Interview with Johnny Fabulous & Mr. TA setting up an Augusta Street Fight vs. "Diamond Back" Jack Maverick later in the evening

Extreme Rules: Heavyweight Champion: "The Franchise" Shane Douglas pinned Tommy Dreamer after a while match with a Belly to Belly Suplex. The wrestled all over the civic center, through the crowd, up the stairs, and more. Dreamer exploded several beverages all over Douglas but mostly the crowd. The Delfonzo's ran in causing the distraction which lead to the Belly to Belly, then Douglas declared the new Triple Threat was born. Pre-match Douglas cut a promo in his usually style, Vince sucks, Dixie sucks, I revolutionalzied the business in the 90's.

Intermission time with photo's in the ring with Dreamer & Hacksaw plus everyone came back out around the civic center and signed autographs, took pictures, and what not.

"Million Dollar Man" Ted Dibiase & Virgil come to the ring and cut a promo. "Playboy" Jimmy James et all come out and challenge Dibiase to a match to which Dibiase replied that he doesn't need to break a sweat on these guys, when you have money you can pay people to do it for you, hahahahahaha. Which lead to:

Main Event
Augusta Street Fight: "Diamond Back" Jack Maverick defeated Mr. TA w/ Johnny Fabulous in a wild brawl. These guys brought out the trashcans, cookie sheets, frying pans and cheese graters blooding each other, then battled all around the civic center. The finish came when the camera man, revealing himself to be AJ Mitrano, attacked Jack Maverick laying him out. Which lead to Mick Foley coming out and making the save which allowed Maverick to pin Mr. TA. After Foley applied to mandible claw to Johnny Fabulous.

Mick Foley then told a couple of good stories. First of all, the last time he was in Augusta was in 1996. Sitting in the back of the Arena Dewey was holding his hand over his ears as it was loud. Steve Austin asked Foley, has he being doing that all night? To which Foley replied, yes except for your match when he was holding his nose.

The second was, he was driving through Auburn earlier and saw the Fireside Inn which had a sign and big photo stating, Muhammad Ali stayed here May 25, 1965 after defeating Sonny Liston in Lewiston, Maine, in room 218. So Mick paid the extra $39 so he could stay in the same hotel room as Muhammad Ali. Which means we can now go stay in the say room that Mick Foley & Muhammad Ali slept in.

All in all it was a fun show with a lively crowd. All the wrestlers were very approachable and friendly and everyone, from my point of view, had a great time.
Posted by Michael J. Labbe at 9:38 PM