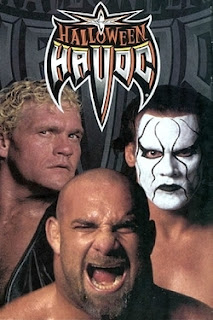 Here is my review of WCW Halloween Havoc on October 24, 1999

Ringside: Tony Schiavone announces that Rey Misterio Jr is injured and he and Konnan have been stripped of the Tag Team Titles. A Triple Threat, Falls Count Anywhere has been made featuring Harlem Heat, The First Family and The Filthy Animals combination of Konnan and Billy Kidman

This was a solid opening contest. There were a few botches and a few okward spots but overall a solid fast paced crusierweight match. Good choice for an opener.
7/10

In Ring: Lash LeRoux attackes Disco Inferno and gives him a Whiplash on the title belt.

Earlier Today: Chris Benoit and Dean Malenko arrived at the arena and are met by Saturn. Saturn says that he has been calling them all week and they won't return his calls. Malenko says that he can take The Revolution and stick up his ass. Benoit tells Saturn to relay that to Shane Douglas

Backstage Interview: Mike Tenay w/Harlem Heat. They said that tonight is their night and they will win back the Tag Team Titles.

This was a good fun brawl with tons of chaos all over the place. There were two referees assigned to this one and with good reason. Jimmy Hart got involved, hitting Booker T with a trash can lid. When Booker went after him, Hart ran up the entryway. Knobbs followed and wrecked Booker with a trash can. Stevie Ray also followed and he and Booker beat the piss out of Knobbs with the stage props. They then brawled backstage. In ring Hugh Morrus hit a No Laughing Matter on Konnan threw a table, which appeared to injury Konnan. 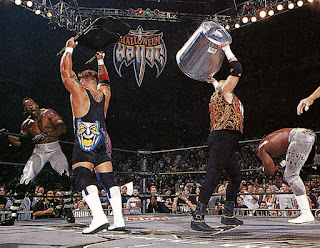 Then backstage, Booker slammed a mummy on Knobbs for the win. Tony Schiavone “He hit him with a mummy. He hit him with a mummy.” Heenan “His mummy is here?” Awful. As Harlem Heat was making their way back to ringside, Kidman got a pin on Morrus which caused a ton of confusion both with the wrestlers and the crowd because the live crowd didn't see the backstage pin. What an awful ending that ruined a good brawl.
6/10

Backstage: Ric Flair, with a crowbar, and David Flair arrive at the arena and they look pissed.

In Ring: Diamond Dallas Page and Kimberly come out and talk about Ric Flair spanking Kimberly 14 times. DDP challenges Ric Flair to a strap match. Bobby Heenan wets his pants over the strap match. Awful. Strap matches are one of the worst match types ever. On a side note Kimberly's promo was way better than DDP's. His was terrible.

Backstage: Goldberg arrives. He is looking for Sid Vicious and is super pissed.

Backstage Interview: Mike Tenay with Eddie Guerrero, Billy Kidman and Torrie Wilson. Tenay announces that all the members of The Filthy Animals as well as The Revolution are banned from ringside. Kidman says that is a load of crap because they are a team. Tenay asks about the health of Konnan. Eddie says Rey Rey is with him so don't worry. Tenay then asks if Eddie was wearing Ric Flair's watch. Eddie says that was none of his business. Tenay then asks about Eddie's match with Saturn. Eddie says that every Revolution must come to an end and tonight will be Saturn's.

Eddie comes out wearing Ric Flair's watch. He gives it to Bobby Heenan so he can hold it for him. This was a good solid match with a good combination of mat wrestling and fast paced action. For some reason the crowd wasn't into this one at all which hurt the match. The DQ came when Ric Flair ran out with a crowbar and attacked Eddie. This would have been much better had it had a proper ending.
7/10

In Ring: Billy Kidman comes out to make the save for Eddie Guerrero but gets wrecked with the crowbar too. Torrie Wilson comes out to check on both Eddie and Kidman but Flair grabs her and lays a big kiss on her and she appeared to like it. Flair leaves but then comes back to get his watch from Heenan.

Backstage: Goldberg is beating the hell out of someone. Officials pull him off and Sid Vicious gets up, bleeding badly, screaming “Is that all you got!”

In Ring: Buff Bagwell says that he has a problem with the 2 new writers from up north that are going to “save” WCW. He says that he also has a problem with Jeff Jarrett. Buff then challenges Jarrett to come out so he can kick his ass. Jarrett comes out with a guitar but Buff beats him up until Lex Luger comes out to get himself a piece of Jarrett. He went to hit Jarrett with the guitar but Jarrett moved and he hit Buff instead. Luger, the dumbass, hit Buff with the guitar handle, it didn't break and most likely injured Buff. Luger then breaks the guitar over the turnbuckle as Jarrett runs away.

Backstage: Mike Tenay is checking on Sid Vicious who is getting his head stitched up. Sid sees the camera and starts flipping out and yells “Let it bleed! Let it bleed!” as he tips over a table.

Backstage: Eddie Guerrero is on the phone telling Misterio and Konnan that they need to come back because they have Filthy Animal business to take care of as he was selling his injuries from earlier.

They were trying to put this match over as Germany vs. USA. This match was really kind of average and I'm wondering why it was even on the PPV. 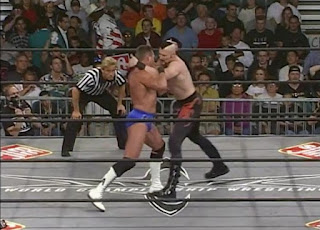 It was nothing more than a squash until Armstrong got what was kind of a surprise win he blocked a neckbreaker and got the pin. After the match The Bodyguard came in and attacked Armstrong.
5/10

Backstage Interview: Mike Tenay w/Ric Flair. Flair talks about beating up The Filthy Animals. Flair talks about his strap match DDP and how when he spanked Kimberly, she liked it as did Torrie Wilson when he kissed her. He then says that after he is done with DDP Kimberly is going to get The Nature Boy again.

This was a solid match but for some reason the crowd wasn't into it. Steiner had the advantage for most of the match but Benoit had a good comeback. The end came when the referee got knocked down, allowing Steiner to bring in a chair. Benoit dodged it and palm striked it into Steiner's face. Benoit then went for a flying headbutt but Steiner threw the chair at him. Dean Malenko then came out and grabbed the chair, and hit Benoit with it. Anyone who didn't see that coming clearly wasn't watching this show. This allowed Steiner get the win. After the match Malenko walked back up the entryway and hugged Saturn who was waiting for him.
7/10

Backstage Interview: Mike Tenay w/Bret Hart. Tenay asks Bret about how his ankle might hinder him in his match with Lex Luger, Luger hit Bret in the ankle with a baseball bat 6 days earlier. Bret says that he as wrestled injured before and this won't be the last time. He then says that tonight he will beat Luger.

This match was kinda dumpy. Bret dominated Luger for most of the match showing no signs of any ankle injury. Then they both went over the top to the outside and Bret came up limping. Luger gained the advantage, slapped on a single leg crab and Bret tapped out rather quickly.
4.5/10

Backstage Interview: Mike Tenay w/Goldberg. Tenay asked if Goldberg's actions from earlier have made Sid Vicious more dangerous. Goldberg points to Sid's blood on the floor and says that you see what he does to people and tonight he is going to separate his head from his body.

Ringside: Madusa comes out in a bikini and models the new Nitro Cologne. She dances on the announce table. Then gets down and grabs a microphone. She pretends to put over the cologne but says that you can tell the super powers from New York that this is bullshit. She then dumps the cologne all over Bobby Heenan. Awful. 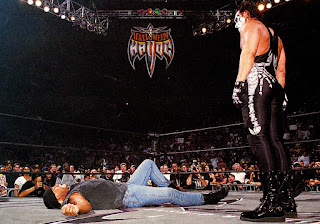 This was fucking terrible. Hogan no showed his entrance then when he finally came out, he was in street clothes and just laid down so Sting could pin him. The crowd booed the fuck out of this.
0/10

This was kinda dumpy and really disappointed me. The buildup throughout the show made want to see this match. Goldberg busted open Sid early on and that pretty much spelled the end for Sid. Sid was bleeding so bad that it was all over Goldberg too. In the end Sid collapsed because of blood loss, the referee called the match and awarded title to Goldberg. Rick Steiner then came out to help Sid to the back but Sid kept refusing the help and wanted to continue fighting.
4.75/10

In Ring: Sting says he didn't come to Las Vegas for a night off. He came for a fight. He then challenges anyone in the back to a match later on tonight.

The rules of this match were pin or submission not smack all four corners, which was way better. This was a good brawl. They battled all through the crowd. When they got back to ringside, Flair laid a big kiss on Kimberly. This allowed Page to gain the advantage and bust Flair open. They battled back into the ring and Flair worked Page's leg and put on the Figure 4 but Page got out. 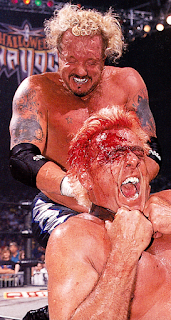 Then all of a sudden Page hit the Diamond Cutter and referee Charles Robinson reluctantly counted to 3. Page was pissed at Robinson so he gave him a Diamond Cutter too. Page then started choking Flair with the strap until David Flair came out with a crowbar to help his dad. Kimberly blocked him and kneed him in the nuts. She took the crowbar and gave it to Page who smashed Ric Flair in the nuts with it. Then he gave David Flair a Diamond Cutter. Aside from the abrupt ending to the match, this was pretty good.
7.75/10

In Ring: EMTs come out to help Ric Flair. David Flair and Charles Robinson are both crying.

Backstage: As the EMTs were stretchering Flair to an ambulance, The Filthy Animals came out of nowhere and attacked him while Torrie Wilson video taped it. They stuffed him in the ambulance and drove away.

This was okay for a 3 minute World Title match. The battle spilled to the floor almost instantly. Back in the ring Sting gained the advantage and out of nowhere hit spear on Goldberg. 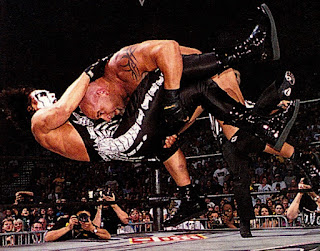 He no sold it, jumped back up and hit a spin kick on Sting. Goldberg then missed a spear in the corner allowing Sting to hit 3 Stinger Splashes. Goldberg then out of nowhere hit a Spear, then a Jackhammer for the win.
5/10

In Ring: Sting disputes the decision with referee Charles Robinson. Then Sting hits a Scorpion Deathdrop on Robinson.

Overall this show scored a 54 out of 100 for an overall score of 54%. This show was watchable but the overbooking really hurt it. The midcard guys put on some good wrestling matches just the stupid, necessary, interference endings ruined them. Its to bad that they weren't allowed to just go out and wrestle. If that were the case this may have been an awesome show. The main event guys on the other hand, except for Page and Flair, put on a bunch of stinkers. The Sting/Hogan title match was an embarrassment. This entire PPV felt more like an episode of Nitro than something I would want to spend $40 on.

Later Readers!
Posted by Michael J. Labbe at 5:44 AM