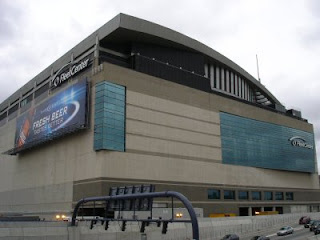 This adventure started on Tuesday April 9, 1997 when my buddy Jay called me and said, hey want to go wait in line to get Nitro tickets tonight in Boston?  Then we can go to the Natick Mall and meet Ric Flair!  How can you say no to that?  Well I couldn't but at 17 years old my mother might have another thought about this.

I asked my mom who told me to ask my step-father Irving thinking there is no where he's going to let her baby boy skip school to stand in-line over night in Boston to buy wrestling tickets.  She was wrong, that's what you get for not wanting to be the bad guy.  The next thing she knew Irving was giving me a ride to Jay's house.  I had a job flipping burgers at Burger King so I had my own money, but my mom insisted on giving me some to make sure I had enough, and once we got to Jay's Irving gave me some more so I was set! 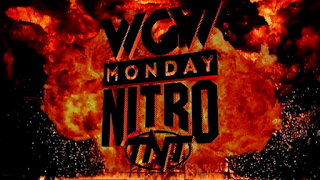 This was Jay & I's first big wrestling adventure together, certainly wasn't our last.  We made the 150 mile drive from Maine and got to the FleetCenter, now the TD Garden, about two in the morning on Wednesday April 10th.  There was no one standing outside the box office which was exciting, however by the time we found a parking spot and walked back to the building there were two people in line.

At the time I didn't fully grasp the magnitude of what we were doing but looking back I can see it.  Think about it, yeah I'm a senior in high school, but I'm 17 years old, Jay is only 18 at this time and we just drove down the Boston our first time on our own to stand outside on an early Spring night, in not the best part of town so we can buy wrestling tickets.  Keep in mind, this was before the internet as we know it today, you couldn't go on-line to buy tickets, there was no pre-sale, you had to go to to a licensed Ticketmaster dealer or charge by phone, but the box office went on sale about an hour before other agents.

It was very cold that night in Boston, and we had a great time talking to other wrestling fans.  I've learned a lot about wrestling fans over the last 20 plus years standing in line waiting to get into shows and one thing that remains true is that we are all there for the same thing, wrestling.  We all have our opinions good and bad, and we undoubtedly will never agree about everything, but all agree that we love wrestling.

I can't tell you anything we talked about that night, but I'm sure these are some of the topics included who is going to see Ric Flair after this, this is WCW's first time coming to Boston I bet the show is going to be amazing.  Isn't Ric Flair the man!  Damn it's cold!

Just before it was time for tickets to go one sale the staff at the Fleetcenter put us at different windows, five or six of them.  When it was time for them to go on sale the ticket agent put up the shade blocking the window and we said two tickets for front row, he printed one ticket.  So we said no, two front row.  By the time he selected two tickets we ended up with second row seats. We said, hey we want front row, he checked, they were all gone.  Seriously there are two of us standing at the window, why the hell would he print one friggin ticket!  Not going to lie, that was a bit discouraging, but hey we're going to Monday Nitro!

We said goodbye to our new friends, some of who we would sit near at Nitro two months later, and headed the 22 miles to the Natick Mall where "Nature Boy" Ric Flair was scheduled to make an appearance at Filene's department store, I know such an odd location.  We got to the mall and grabbed some lunch and got in line because the line was already starting to fill up.  We managed to get close enough to see the start of the line, but still had like three hours until the signing was going to start.

We took turns exploring the mall first Jay and then myself.  I went to a video store, back when we had them, and searched the wrestling tape section.  For $10 I found a Women's Championship Wrestling VHS that featured Wendi Richter on the cover.  You have to understand I was, and am, a huge Wendi Richter fan and finding this tape was pretty awesome! 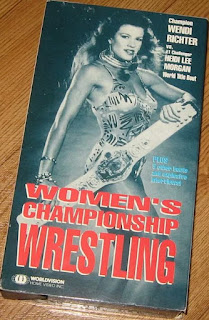 I had never seen any of the matches on it before and it featured what they billed as the first ever women's Steel Cage Match with Richter defending the NWF Women's Championship against Heidi Lee Morgan.

I went back in-line with Jay and it had grown huge snaking out of the store and down the hall in the mall.  In Filene's they had televisions suspended in the departments that they use to run commercials on for the items they sold.  Someone working there had a genius idea and popped in a tape of The Great American Bash 1996 to entertain us while we waited in line.

I remember watching this live on PPV when it first aired sitting at Jay's house.  Ironically it was during Ric Flair's match when they announced The Nature Boy had arrived, and he had a surprise guest with him The Giant, now known at The Big Show.

We couldn't get photos with either of them but they were supplying an official WCW 8x10 photo that they signed for us.  I also had Flair sign what is my first ever signed wrestling trading card.  From the 1995 Topps WCW Main Event Cardz set. 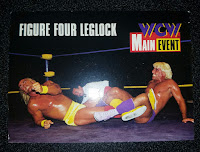 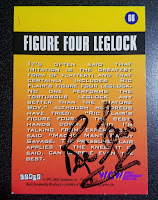 I'm not going to lie, I was awestruck being in the presence of The Nature Boy!  I slid the card across the table and I said something about loving it because he has the figure four on Hulk Hogan on it.  He was smiling and said something, I don't remember because it didn't register but he was smiling.  He signed the back because he only had a black sharpie and the front of the card is so dark.  I collected the card, the photo, and shook his hand.

I took a step to the left and was in front of The Giant, as star struck as I was for Flair I was completely opposite about The Giant.  He said, "You want a picture?" I said I guess and took to 8x10 thanking him.  Jay, somehow, completely missed getting an autograph photo of The Giant, he was that star struck.

It had been a long journey until now, and not being very well thought out in advance we both found ourselves awake for over 30 hours with only a couple hour nap.  We had a long 165 mile drive back to Jay's house and it was daunting.

The adrenaline kept us going for the most part but it started to wear off in Maine and as we neared Portland I dozed off.  I woke up a few minutes later and the first thing I noticed is that we were going exceptionally fast and when I looked over at Jay I couldn't help but notice that he was asleep!  I struck him yelling at him to wake up, and he did in a massive panic.  It was at this time we both noticed the flashing lights from the police cruiser behind us.  The adrenaline had returned in a big way in the form of heart pounding fear!

Jay had gone to college in Alaska for a semester and had just come home a few weeks back and still has his Alaska license, and the vehicle was registered to his mother.  We had been stopped for speed and Jay used the excuse that he wasn't familiar with the roads and he only got a warning.  We were extremely lucky! I don't mean because he got a warning.

That June we went back to Boston for Nitro, but that story will be in another blog post. 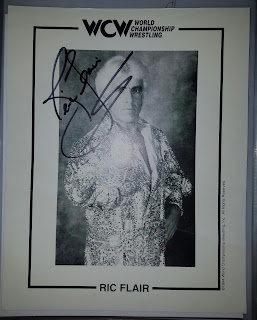