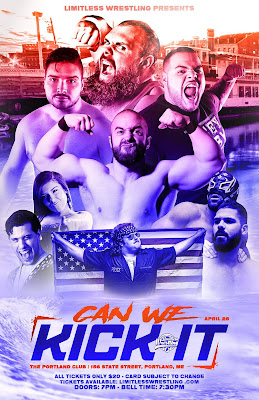 Here is my review of Limitless Wrestling's Can We Kick It in Portland, Maine on April 28, 2017.

Match 1: Lio Rush defeated Jon Silver
Awesome match and an excellent opener. These guys destroyed each other trading brutal kicks. It seemed a little short but they filled the time they had with a ton of action.
9/10

Match 2: The Maine State Posse: Danger Kid & Aidan Aggro defeated Massage NV: VSK & Dorian Graves,  and Jeremy Leary & Skylar in a Triple Threat Match
Good match that had lots of fast paced action with a little comedy thrown in. Randomly during the match Leary body slammed Chris Barry. Massage NV kept trying to give a massage to Leary and he kept getting pissed. Later in the match Skylar volunteer for a massage but got stomped instead. After the match Danger Kid was really pissed at Leary and Skylar for some reason.
8/10

Match 3: Joey Janela defeated Mr. Grim
This was my first time seeing Janela actually wrestle and I was impressed. He had a great match with Mr. Grim. I was a little disappointed I didn't get to see the jumping tombstone but that's okay because the match was really good.
8/10

Match 4: Brandon Watts vs. Tyler Nitro w/Mike Gamble
This was a solid match but I kinda expected more. There was a bunch of problems between Nitro and Gamble. Gamble was trying to help Nitro but he didn't want the help. In the end Gamble caused Nitro to lose. After the match they had some words.
7/10

Match 5: Donovan Dijak defeated Mikey Webb
Awesome match. The best Mikey Webb singles match I have ever seen. Lots of hard hitting power moves and some ringside brawling as well. Check this out its really good.
9/10

Match 6: Ethan Page defeated David Starr
Another good match. These guys fought really hard. The more I see both of these guys, the more they grow on me. I was kind surprised to see Page get the win.
8/10

Match 7: Jay Freddie defeated Chris Dickinson
Awesome match. These guys beat the hell out of each other. Jay Freddie is one of the most underrated guys on the indys right now. This match was really even with both guys answer the others moves. The finish was kinda dumpy only because Barry fucked up the count which really pissed off Dickinson. Check this match out, its really good.
9/10

Match 8: Troy Nelson defeated Dick Justice w/Sidney Bakabella
If your into comedy matches, which I'm not, then you might have enjoyed this. I could do without ever seeing Dick Justice again. Almost no wrestling in this one. It really wasn't for me.
3/10

Match 9: Xavier Bell defeated Dan Barry, Josh Briggs, Jimmy Lloyd, Alexander Lee, Manny Martinez, Kai Katana and Owen Brody in an 8 Man Scramble Match
This match was really fun because there was action all over the place the entire time. Josh Briggs really impressed me. I hope he comes back. Bell got the win his sick piledriver finisher.
7.5/10

Match 10: Ace Romero defeated Michael Elgin
Great main event. These guys beat the hell out of each other with tons of hard strikes. Romero took everything Elgin had and then some. In end Ace got the win after a Boss Man Slam variation. Check this one out its great.
9/10

This show scored 77.5 out of 100 for an overall score of 77.5%. This is one of the best shows I have ever seen live and it may be the best Limitless Wrestling show in its short history. There are 3 matches rated 9/10 and there was only 1 stinker, but that really depends on taste in wrestling. Do yourself a favor and buy this DVD when it comes out. It will be worth every cent.

Limitless Wrestling returns to the Westbrook Armory May 13th! 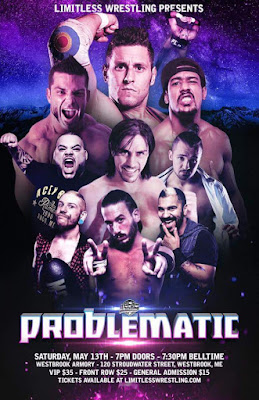