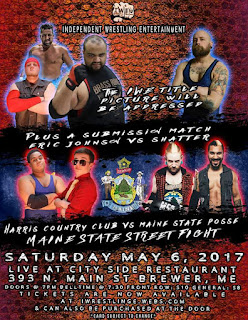 In Ring: Adam Ricker comes out with Sebastian Mayhem and a bat with Big Daddy written on it. He whines about losing the IWE Title and says he wants his rematch. Captain comes out and says Mayhem is getting the IWE Title match tonight and not Ricker. Mayhem is surprised and says that he already has a match. Ricker gets pissed. Captain also says that Ricker is banned from ringside for the title match.

This was a solid match. Williams fought hard in his last match, including hitting a suicide dive. I've never seen him do that before. Mayhem got the win with a kick to the head.
5.75/10

In Ring: After the match Mayhem shakes hands with Williams. Williams then has an emotional retirement speech.

How can you be classic if you've only been wrestling for a few months? This match was kinda dumpy. O'Reilly has improved a lot over the last year but Strange still looked green.
3/10

Ringside: Tommy Lane was coming out for a match when Adam Ricker comes out of nowhere and wrecks him with a bat. He threatens to wreck Ethan with the bat if Captain doesn't give him his title match tonight or if Alexander Lee doesn't come out. Lee comes out fights them off.

In Ring: Big Moxie is super pissed that he lost.

In Ring: Captain comes out and announces that Derek Shorey won't be facing Eric Johnson tonight because he got injured in an MMA fight the weekend before. Derek Shorey comes out with his doctor's orders to not compete. Then talks about his injury. Eric interrupts him and says that this is bullshit because now he won't be able to earn his IWE Title shot. Eric then pokes at Shorey and he tears up his doctor's orders and says he doesn't care what the doctor says he is gonna fight. Bomb then comes out and convinces Shorey not fight and says since Shorey can't fight Eric he would. Eric asks Captain if he will get his title shot if he beats Bomb. Captain explains that if Eric wins he does get his title shot but if he loses he will have to face Shorey next month.

Bomb was wrestling in street clothes. I didn't really pay much attention to this match.
3/10

Ringside: Alexander Lee is in the ring for his match with Mayhem, when Adam Ricker comes out. Mayhem then tried a sneak attack on Lee but he saw it coming.

This was okay but if would have been way better if they were just allowed to put on a wrestling match instead of the expected interference. Ricker caused the DQ when he got involved. In the fighting Lee's eye got injured.
4/10

This was awesome. They destroyed each other all over the place and used a ton of different weapons. After this match I became a big fan of the Harris Country Club, they really impressed. At one point they handcuffed Danger Kid to the bottom rope but put the handcuff threw his ear. I've never seen that before. The end came when MSP pealed back the canvas and padding and Danger Kid gave Todd Harris a tombstone on the exposed wood.
8/10

Overall this show scored a 28.5 out of 60 for an overall score of 47.50%. This show was decent with an awesome main event and some good build toward the rematch between Alexander Lee and Adam Ricker.

Later Readers!
Posted by Michael J. Labbe at 5:33 AM