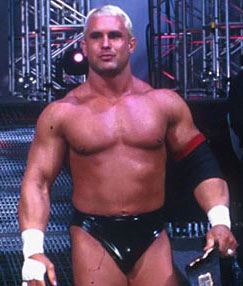 Chris Candido passed way just over twelve years ago on April 28, 2005 from pneumonia.  He had broken his leg in a match just a few days before and had to have surgery to repair his tibia and fibula.
Originally it was reported that a blot clot from the surgery caused his death but his brother has since stated otherwise.  There has been much written about Chris's career but in this post I'm going to focus only on his time in World Championship Wrestling.

Candido debuted March 19, 2000 in Miami, Florida at WCW Uncensored on commentary during the Cruiserweight Championship match between champion The Artist and Psychosis.  He made his in ring debut the next night March 20th on Monday Nitro from Gainesville, Flordia defeating Lash LaRoux with a headbutt off the top rope.  The night after that he lost to Chavo Guerrero on Thunday, so he wasn't off to a big start.  He would revenge his loss to Chavo beating him on Thunder March 29, 2000 and was on the losing end of a six man tag match on the Thunder prior to Spring Stampede.

At Spring Stampede, April 16th from the United Center in Chicago, Candido would capture the vacant Cruiserweight Championship defeating Shane Helms, Shannon Moore, Crowbar, Lash Laroux, The Artist, & Juventud Guerrera.  Tammy Sytch joined Chris this night making a run-in pushing The Artist off the top rope.  After the match Sytch and Paisley fought until they were pulled apart. 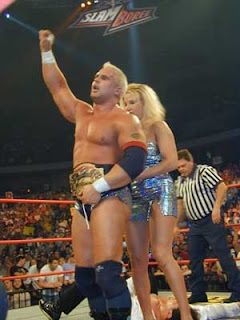 Candido & Sytch would team together defeated The Artist and Paisley at Monday Nitro from Rochester, New York on April 24th.  Candido would retain the title over the next few weeks in matches against The Artist and Crowbar.  Candido would lose the title at the May 15th Nitro from Biloxi, Mississippi in a Mixed Tag match teaming with Tammy in a loss to Crowbar and Daffney who became co-champions.

On Thunder May 30th in Boise, Idaho, aired May 31st, Chris Candido wrestled Hardcore Champion: Terry Funk in what is my favorite match of his WCW run.  Candido comes to the ring first dressed and acting like Terry Funk.  He then meets Funk on the entrance ramp attacking him about halfway to the ring, this was the closest the match got to the ring.

The action quickly spread to the back and out to the parking lot where Funk threw Candido in the back of a pick up and then sped off across the parking lot with the referee chasing them on foot.  They end up down the road from the area a short distance at a horse stable.  There they commence to fighting including a spot where Candido drives Funk's into a pile of horse shit.

They spill into a horse stall where Funk piledrives Candido and a very unimpressed horse kicks both of them.  For reasons never explained a standard "wrestling" table is present, Candido sets Funk on it and begins to climb the stall, Funk pulls Candido off through the table.  The referee finally catches up and for reasons unknown Funk hits the ref with a trash can knocking him out.  He then attempts a pinfall but there is no one to count it.  Funk dumps a bucket of water on the official reviving him and then pinned Candido for the win. 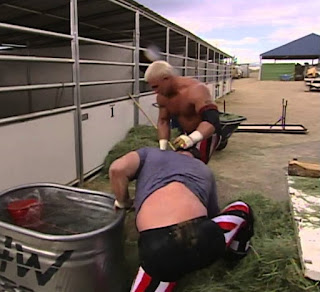 My only issue with this match is the fact that a camera crew was already at the stable instead of chasing them down there.

The remainder of Candido's run was uneventful.  He, Shane Douglas, and Bam Bam Bigelow reformed the Triple Threat for a few weeks before Candido departed. His final match in WCW was taped on June 20th in Bozeman, Montana for Thunder, aired June 21th, where he and Bigelow defeated Buff Bagwell in  a handicapped match.

To summarize he was in WCW for only 93 days, he competed in 21 matches, losing twelve winning 9, he was the Cruiserweight Champion for 29 days, he wrestled matches on Nitro, Thunder, Worldwide and two house shows, and he made appearances at three Pay-Per-Views, Uncensored, Spring Stampede, & Slamboree, wrestling at two of them.

Candido started training at the age of 14 and was only 33 years old when he died.  I cannot imagine what he could have accomplished in his career had he not passed away.