On December 7, 1971, Terry and Dory Funk, Jr won the NWA International Tag Team Championship from Giant Baba and Antonio Inoki in Sapporo Japan. However, on May 18, 1972 Giant Baba brought the feared Seiji Sakaguchi to Amarillo to escort the belts back home. This title match was promoted several months out.

It would be Baba's first appearance in Amarillo, however, "Big Saka" had given Junior a scare in the Amarillo Territory in the fall of 1970 and he was no stranger to the area. Japanese wrestlers had terrorized the local boys for years as the feared team of Pak Song and Al Kim nearly "killed" Terry Funk and Ricky Romero something the fans had not forgotten. This was about more than defending a championship. 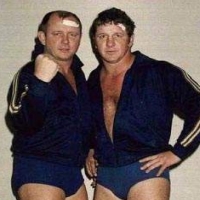 A sold out historic Amarillo Sports Arena was nervous and buzzing at bell time. The Funks struggled with there bigger opponents early, both had attempted the dreaded double arm suplex but couldn't get either off the mat. Finally about 20 minutes in, Terry and Dory double teamed Baba with the suplex and Junior got the first fall. Big Saka used a knee drop to the throat to get the pin in the second. Around 40 minutes it appeared Dory was about to falter, he finally got the tag with Terry and suddenly the ring was full.

Terry was flipped out the ring and Dory and Saka collided. Baba was covering Dory and Terry snuck in behind to drape Saka. Ref counts 1..2,Terry screams and referee Ken Farber, he's the legal man and Farber leaps over Baba/Junior and hits the mat for the three count on Saka. Titles secured!!!

Hometown Boys prevail and National honor defended. It was a crazy night. Probably the most exciting tag match I ever seen in person. Of course, the next night the Funks lost the straps in Los Angeles, as I found out decades later. That match in LA is on YouTube in it's entirety. 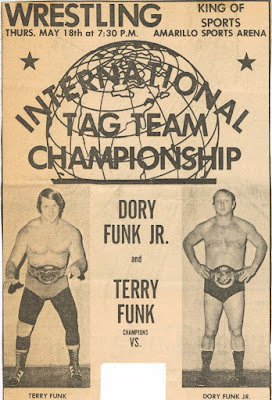 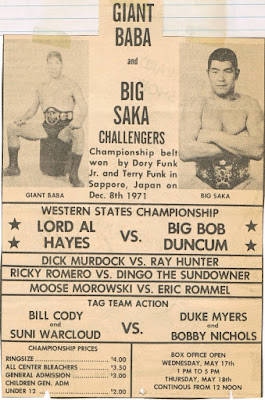