Maria Menounos in the WWE


Maria Menounos is known for being a TV correspondent on such entertainment shows as Entertainment Tonight, Access Hollywood, and the Today show.  She has also had a few movie roles and appeared as herself on several different TV shows.  What the average person doesn't think of is her being related to is professional wrestling.

Menounos' first appears in the WWE was as a guest host on the October 12, 2009 episode of Monday Night Raw with her Access Hollywood co-host Nancy O'Dell.  That night on the show she had a confrontation with Beth Phoenix who was upset over being traded to Smackdown and was physical with Menounos.  That lead to a mach that night where Menounos teamed with Kelly Kelly and Gail Kim to defeated Phoenix, Rosa Mendes, & Alicia Fox when Kelly pinned Mendes with a legdrop. 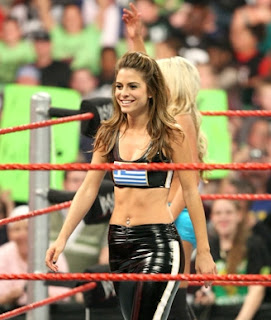 I didn't think anything about her appearance that night because it was just another celebrity being involved in a wrestling match.  That night in the match she got her own entrance and had customer gear with wrestling boots. She was only in the match for a minute but she looked good and didn't do more than she could do.

Her next appearance was a over two years later in December 2012 at the Tribute to the Troops special.  She teamed with Alicia Fox, Eve Torres, Kelly Kelly, defeating Beth Phoenix, Natayla, & The Bella Twins when Menounos pinned Divas Champion: Beth Phoenix with a sunset flip. 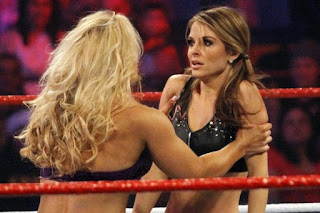 Maria was given her own entrance where clips from the match in 2009 were shown.  The commentators talked about a twitter exchange between Phoenix and Maria.  Menounos actually started the match with one of the Bella's taking a side headlock takeover before delivering one of her own.  She then tagged out.  She tagged herself back in after the match and when Phoenix charged at her in the corner she managed a corner assisted sunset flip getting a surprise three count.  Once again she looked good in the ring for what she did.

Her return to the WWE was just a few months later at WrestleMania XXVIII once again in tag team action.  However this time there was a build for the match.  Starting on the March 12 episode of Raw Beth Phoenix mentioned she was sick of Menounos showing up at WWE events.  Next on an episode of Extra during an interview segment with Kelly Kelly Beth Phoenix and Eve Torres showed up and confronted Menounos challenging her for a match at WrestleMania which was accepted. 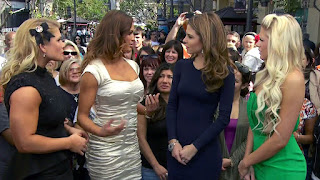 At WrestleMania XXVIII in Miami, Florida Menounos teamed with Kelly Kelly and she once again got the best of Diva's Champion: Beth Phoenix pinning her with a roll up after almost seven minutes.  Menounos had been participating in Dancing with the Stars and had cracked two ribs during rehearsal for that show. During the match at Mania she played the Ricky Morton roll taking a beating on her two cracked ribs from both Eve and Phoenix.  Phoenix collided with Eve Torres which lead to the pin. 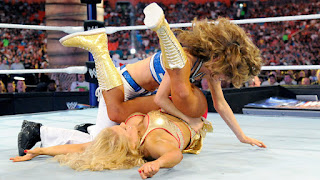 I'm not a fan of celebrities appearing in wrestling matches, at the shows fine, but in the matches not so much.  It has a lot to do with a person who has dedicated their life to wrestling losing a spot, even for one night, to someone who hasn't.  I understand it brings mainstream attention to wrestling and that's good for everyone but still.  I realize that I might be in the minority but that is genuinely how I feel.  When it comes to Maria Menounos though that changed after she inducted Bob Backlund into the 2013 WWE Hall of Fame. 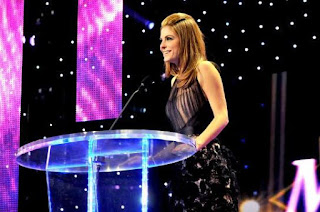 When she was first announced it was puzzling.  I took into account her previous appearances but I just assumed that with her celebrity status this was just a main stream media attention grab.  I was very wrong, and I don't think I was the only who was proven wrong.  Turns out Mrs. Menounos is quite the wrestling fan, and a huge fan of Bob Backlund.  She was fan as a kid watching wrestling her whole life and later in life became friends with Mr. Backlund.  She told many stories about Mr. Backlund in a way which you can tell she is very genuine. 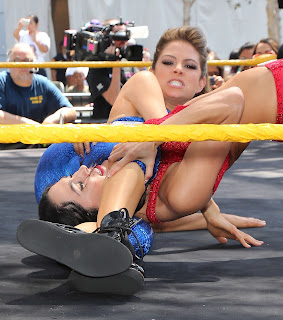 I think what truly shows she is a fan of wrestling is the fact the her fourth, and to date, final match was at SummerSlam Axxess in 2013 where she teamed with Natayla to defeat Brie Bella & Eva Marie.  This is essentially a how show match just for those in attendance.  I mean yes clips were shown on SummerSlam but I can't recall any other time a celebrity has worked a house show.

In the years to follow she has made several more non-wrestling related appearances working the red carpet for WWE Hall of Fame in 2014, 2015, 216, & 217.  She also worked as a backstage interviewer for a few WrestleManias.  At the 2015 HoF Red Carpet she cut the Hard Times promo to Dusty Rhodes in his voice, I mean, yeah she's a fan! 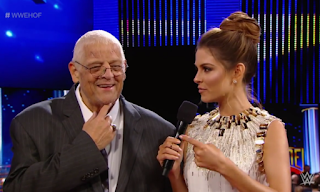 Maria Menounos has made more appearances in the WWE than any other celebrity and is at the point where when I see her I don't have that normal feeling of dread of how is this outsider going to mess things up.  Because she's not an outsider, she's a die hard fan like us.