For years the WWE maintained that the first ever Ladder Match in the WWE was at WrestleMania X.  They would later release on home video and admit that the first ever ladder match was held almost two years before at a house show in Portland, Maine between Bret Hart and Shawn Michaels.

Currently the WWE  tells us that the first Iron Man Match was between Bret "Hitman" Hart and Shawn Michaels at WrestleMania XII March 31, 1996, this is not true.  Over three years before WrestleMania XII on January 9, 1993 at the Boston Garden Bret "Hitman" Hart defended his World Championship against the "Nature Boy" Ric Flair in a 60 minute Iron Man Match. 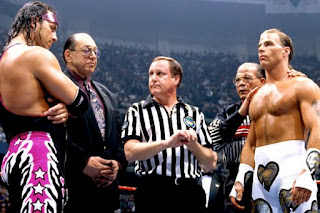 During Ric Flair's final weeks in the WWE in 1993 he and Hart were working the house show loop, having on average thirty minute matches for the WWE World Championship, sometimes twice in one day.  In fact on January 9th in Boston after wrestling for an hour on a matinee show in the main event they then drove up to Portland, Maine to headline a show that evening and wrestled for thirty minutes before Hart secured the win.

I don't know if WWE has any footage of this Iron Man Match between Flair and Hart but there is a poor quality fan cam of it on YouTube.  Also during this time the WWE sometimes referred to this as a marathon match.

Here is a description of the match courteous of The History of WWE: 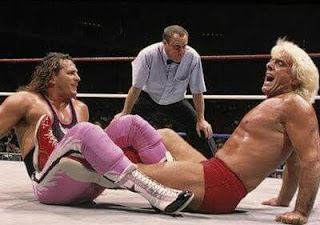 Fall 4 - Hart defeated Flair via submission with the Sharpshooter at 55:03
Fall 5 - Hart pinned Flair by reversing a figure four leg lock attempt into an inside cradle at 59:42 as Flair attempted the figure four; at the beginning of the fall, Heenan returned to the ring to hand Flair a pair of brass knuckles - which ended up being used on the champion - before once again being ejected from ringside

This match had been set up on December 5, 1992 at the Boston Garden, Hart had defeated Flair in just under thirty minutes so Flair challenged Hart to a marathon match when they returned to Boston in January.

In 1994 the Hitman would defend his WWE Championship four more times in Iron Man Matches at house shows against his brother Owen Hart. 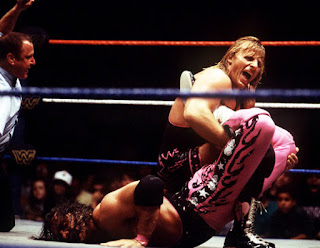 So there you have it, five lost Iron Man Matches that the WWE doesn't talk about.  I for one would love to know if WWE has any of these in their vault.  Who knows, maybe one of them will be on the forthcoming WWE Unreleased 1986 - 1995 DVD Set.

Later Readers!
Posted by Michael J. Labbe at 1:16 AM