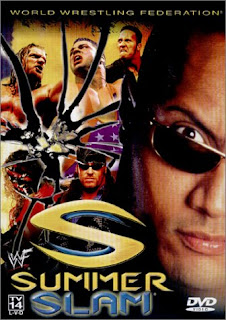 Here is my review of WWF Summerslam 2000.

This was a short, really average match, but it served its purpose by getting the crowd going, since Too Cool was super over for some reason and everyone hated RTC. I personally can't stand Too Cool. That gimmick is terrible. The Hos got involved in the match when Richards tried to tuck tail and run. The end came when Scotty was going for The Worm and Richards wrecked him with a superkick for the win.
5.75/10

Backstage Interview: Michael Cole w/Shane McMahon. Cole asks Shane about his thoughts on Kurt Angle kissing Stephanie 3 days earlier on Smackdown. Shane says he supports whatever decision she makes. He then sees Steve Blackman, who he has to defend the Hardcore Title against, and runs scared.

This match kinda sucked. It was only about 4:30 and nothing really happened except for the finish. X-Pac hit a low blow then an X-Factor for the win. After the match X-Pac wanted a handshake but Road Dogg kicked him in the gut instead and gave him a pumphandle slam.
4/10

Backstage: Eddie Guerrero tells Chyna it doesn't matter which one of them wins the Intercontinental Title.

Backstage: Trish Stratus is worried about who is better looking, her or Chyna. Val Venis gets pissed because he has to defend the Intercontinental Title in a Tag Team Match and his partner is Trish.

The rules are if Chyna or Eddie get the pin on either Val or Trish, they win the IC Title. Val wrestled almost the entire match by himself. He tagged Trish in late in the match when Eddie was down and Val needed a breather. Eddie quickly gained the advantage, tagged in Chyna who wrecked Trish for the win and the Intercontinental Heavyweight Championship.
5/10

Backstage: Stephanie McMahon is backstage with a female backstage worker named Janet. Janet talks about Stephanie kissing Kurt Angle. Janet says all the ladies in the lockerroom are wondering if Kurt is a hunk. Stephanie says he is a good kisser.

Lawler was defending his buddy Jim Ross in this one. This match sucked. All Tazz did was yell at Jim Ross while Lawler did only punches. The end came when the referee was knocked down and Tazz locked in a Tazzmission. JR then got up and smashed a candy jar over Tazz's head allowing Lawler to get the win.
3.75/10

This match was really average. Shane ran scared around ringside and even into the crowd. Once Blackman got a hold of him, he beat the piss out of him until Test and Albert came out to help Shane. They all battled up the entryway. Blackman finally got the advantage back and chased Shane up the Titantron scaffolding. 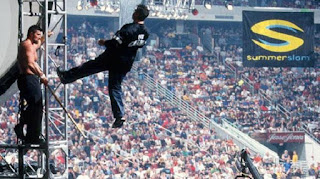 Blackman kept hitting Shane with a kendo stick he carried up with him and it knocked Shane off and he fell about 50 feet onto a large wooden box of some kind. Blackman then climbed down about halfway and jumped off onto Shane for the win. The finish helped out this match a lot.
6/10

Backstage: Stephanie is super worried about Shane. Kurt Angle comes in and says that Shane just had the wind knocked out of him. Kurt then hugs Stephanie when Mick Foley walks in. Mick says that Shane landed on his kisser.

Match 6: Chris Benoit defeated Chris Jericho in a 2 out of 3 Falls Match

This was a pretty good match as these two have always had. The first fall they beat the hell out of each other, starting before the bell even rang. The end of the fall came when Benoit locked in the Crippler Crossface. In the 2nd fall Benoit worked Jericho's shoulder until Jericho reversed a German Suplex into The Walls of Jericho to pick up the 2nd fall. For some reason they played Jericho's music here. The 3rd fall was very back and forth with both guys getting many near falls. Benoit got the 3rd and final fall when he reversed a schoolboy into another pin and held the ropes for the win.
8/10 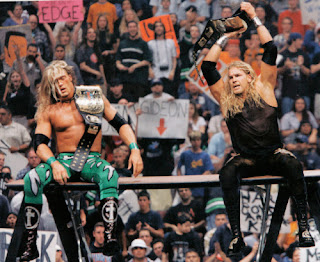 Unbelievable. Truly innovative. This must be seen. These guys killed each other.
10/10

The winner would be the first to execute a Stinkface. This was terrible. The end came when The Kat kicked Terri and she headbutted the referee in the nuts. Then Al Snow threw in Head. The Kat smashed Terri with it, then dragged her in the corner for a Stinkface and the win.
0/10

Match 9: Undertaker fought Kane to a No Contest

These guys beat the piss out of each other right from the get go. They battled all over ringside using chairs and the ring steps. Undertaker kept trying to take Kane's mask off and the end came when he finally got it off and Kane hightailed it covering his face.
7.75/10

Backstage: Kurt Angle calls someone on the phone.

Backstage: Stephanie is with Triple H while he is preparing for his match when the phone rings. Stephanie pretends that its her mother. Triple H takes the phone but nobody was there.

In Ring: Kurt Angle said that a lot of people are expecting an apology for kissing Stephanie. He said that he will apologize for not doing it sooner. Triple H comes out and beats the hell out of Angle. He went for a Pedigree on the announce table but it broke prematurely and Angle wailed his head on it. Triple H got a sledgehammer out from under the ring. As he went to use it The Rock came out to start the main event. 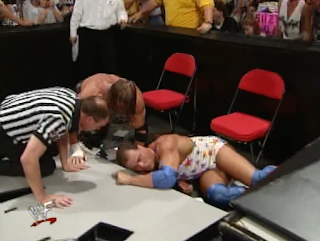 This was a great main event with lots of great action as well as a great storyline. Triple H and The Rock started this one off hot. While they were battling, EMTs came out and tried stretcher Angle to the back but Triple H stopped them and attacked Angle. The Rock and Triple H battled back to the ring while Stephanie came out to check on Angle as the EMTs stretchered him to the back. Stephanie came back out. Triple H told her to get the belt but when she went to hit The Rock, he moved and she hit Triple H. The Rock went to attack Stephanie but she got away and went to the back. The Rock and Triple H battled for awhile, when they cut to the back with Stephanie pleading with Angle to go out and help Triple H. Angle said yes. 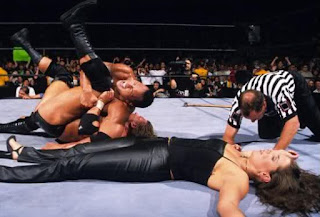 Angle came out with Stephanie and tripped The Rock allowing Triple H to hit a Pedigree but Angle pulled out Triple H at the count of 2 and smashed him into the ring steps. Angle then went for the pin but only got 2. Triple H then called for Stephanie to get him the sledgehammer. She threw it in but Angle got it. Stephanie then went to stop Angle from hitting Triple H but she got accidentally punched in the head by Triple H. Angle then knock out Triple H with the hammer. He went for the pin but The Rock broke it up and threw him to the outside. The Rock then hit The People's Elbow for the win.
8.75/10

In Ring: As The Rock was celebrating on the entryway, Angle carried a lifeless Stephanie to the back.

Overall this show scored a 59 out of 100 for an overall score of 59.0%. This was a good fun show. The undercard wasn't very good but the crowd was way into it which helped a lot. The main attractions were great though. Jericho vs. Benoit was good as was the Undertaker/Kane brawl. Where this show really stood out was the Triple Threat match and the TLC Match. Those two especially the TLC Match make this one of the better SummerSlams.