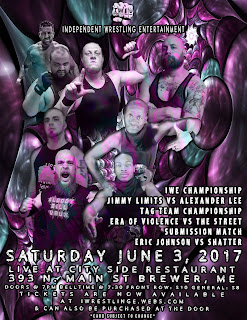 Match 1: Danger Kid w/Aidan Aggro defeated JP O'Reilly and Calvin Strange in a Triple Threat Match
Solid match with lots of action and even a few dives to the outside. Good choice for the opener.
5.75/10

Match 2: Adam Ricker defeated Tommy Lane
Pretty much a squash. Lane did get some offense in early when he came out through the crowd and attacked Ricker from behind.
3/10

In Ring: Jon Alba and the rest of The Station come out and Alba talks about how great they are. He then talks about the challenge he is going to make. Big Moxie comes out and Alba challenges him to a match for the Maine State Championship. It will be Jon Alba and Adam Ricker vs. Big Moxie in a Handicap match. Moxie accepted but he added the stipulation that if Ricker and Alba lose then Alba is gone from IWE. Alba then accepted but added the stipulation that if Moxie loses he has to join The Station and be their bitch. The Station then attacks Moxie and gives him the Shield Triple Powerbomb. Alexander Lee then comes out and chases them off.

Match 3: Derek Shorey defeated Eric Johnson in a Submission Match
Decent match with Shorey looking good except for a few moves that looked kinda dumpy because of the size difference. Shorey got the win with an armbar.
4.75/10

In Ring: John Bryer comes out and basically fires Eric Johnson. Eric says that its bullshit but accepts it.

In Ring: Captain comes out to have an interview but The Era of Violence comes out and Bill Vaux tells him that its their time and he needs to leave before he kicks his ass.

Match 4: Tag Team Champions: The Street: Elite Terrell & Angel Cross defeated The Era of Violence: Rob Marsh & Bill Vaux w/Chad Epic by Count Out to retain
Solid tag team match. Both teams are continuing to improve. There were some sweet dives by The Street and one of them took out all 4 competitors but The Street got back into the ring before the 10 count for the win.
5/10

In Ring: The Era of Violence, especially Rob Marsh, was pissed about the loss.

In Ring: Captain brings out The Maine State Posse and asks them why they came back. They said they came back to challenge for the tag team titles. The Street comes out and says that they have to earn a title shot but they accept for a match next month.

Match 6: IWE Champion: Alexander Lee defeated Jimmy Limits w/Jon Alba to retain
Good solid main event. There was little to no interference from The Station which was nice. If this gets released its worth a watch.
6.5/10

In Ring: Jason Rumble comes out and interrupts Alexander Lee's celebration and says that after he beats Davey Boy Smith Jr in Fairfield on July 7th, Lee is next on the 8th and he will become IWE Champion.

This show score a 25 out of 60 for an overall score of 41.66%. Another decent show from IWE with another good main event. There were a few stinkers but overall a good night of wrestling.

Later Readers!
Posted by Michael J. Labbe at 1:50 AM