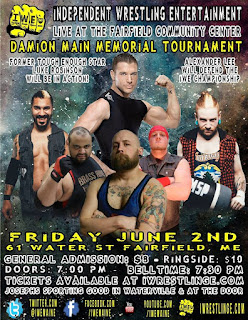 I first met Dennis, that is who he introduced himself to me as so that is what I have always called him, in late 2000 when I was working at Movie Gallery.  He came in with his with his wife or girlfriend at the time to rent some films.  I don't recall how, but somehow wrestling came up and we started chatting about it.

Through multiple visits at the video store Dennis and I would always chat about wrestling.  He eventually told me that he was trained to be a wrestler by the legendary Ox Baker and told me about some of his matches including one with Sabu.

Even after I left the video store in October 2001 I would still run into Dennis and he always greeted me with a friendly smile and because of wrestling we always had something to talk about.  A short time later I saw Dennis ring announcing a show in Fairfield at the Community Center.

In 2006 I would join Dennis and Dr. Everett Payne on their podcast The Turnbuckle Truth, about the road to independent wrestling.  It was my first foray into podcasting, sadly after several months the show was over.  Years later I would return to the podcast world with "Podcast of 1,000 Holds."

Dennis was a genuinely nice guy and was the epitome of don't judge a book by it's cover.  He was a big man, over 6 feet tall, shaved head with tattoos all over his head, neck, arms hands, he had a beard or goatee, and I frequently saw him in gold chains. He looked quite intimidating and yet he was very soft spoken and likable almost always with a smile on his face.

I'm glad that IWE chose to honor him with this show.  At only forty seven years old Dennis left this world far too soon.  Thank you to the IWE, Sonny Roselli, John Bryar, and the near 150 fans that attended.

The show opened with John Bryar in the ring with an impassioned speech about Damion, what he meant to him and what this night means to the IWE and Damion's family.  It was excellent. 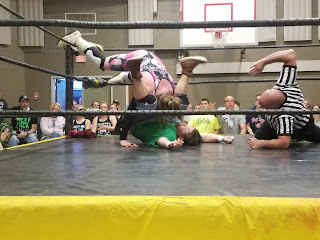 Luke Robinson pinned Tommy Lane, pre-match Luke talked about Damion and how they used to travel together with Tommy and how much he misses his friend

After intermission Chris Santone came to the ring to talk about Damion and he was interrupted by Rob Marsh and Chad Epik.  Epik said some scathing an inappropriate things about Damion and then they attacked Santone.  Big Moxie made the save which lead to...

Tag Team Champions: The Street: Elite Terrell & Angel Cross defeated The Station: "Boston Bad Boy" Jason Rumble & Adam Ricker with Jimmy Limits by disqualification.  A member of the street got Ricker's bat, hit the canvas with it then threw it to Ricker and took a bump, when the referee turned it looked like Ricker hit him with the bat. 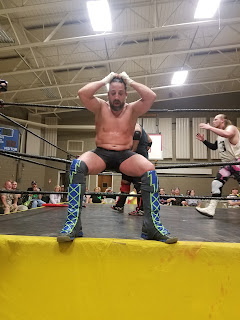 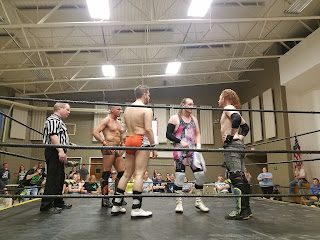 Post match Luke Robinson went to the back bringing Jimmy Limits back out the ring, the faces then all hit their finishers on him to send the fans home happy. 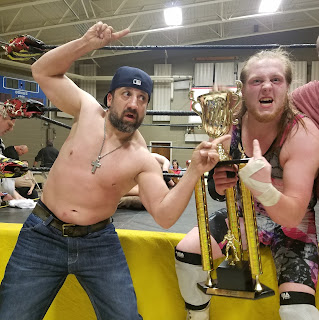 It was a decent night of wrestling.  Jimmy Limits looked good in his two matches with cheap heel wins in both.  He had his feet on the ropes for the pin on Larry and the quick small package on Robinson.  It was my first time seeing Calvin Strange, I heard that he trained at the Storm Wrestling Academy with Lance Storm.  He looks pretty green, but has loads of potential and I look forward to seeing how he progresses.

JP O' Reilly and Lee had a short stiff match and it appeared that they both got their bell rang with a headbutt.  This was the best match I've seen O'Reilly in and I love that Lee is showing his killer instinct again I've always enjoyed watching him in the ring.  I think IWE needs to book a rematch the next time they are in Fairfield, I know I want to see it.

IWE's next show in Fairfield is Friday July 7th featuring David Hart Smith and he will take on the "Boston Bad Boy" Jason Rumble.