This past Friday, June 23rd, I attended Ring of Honor's Best in the World pay-per-view in Lowell, Mass.  You can read about it here. At the show two wrestlers from Mexico's CMLL were featured in a tag team match: Ultimo Guerrero and El Terrible.

I had heard of both of these wrestlers before and had seen a few of their matches but those were primarily lucha libre style six man tags and those are a far cry different from a tag team match and especially a singles match.

I was blown away by both of these Mexican veterans, but I was mostly impressed with El Terrible especially how the slapped the the crap out of Vinny Marseglia in the corner.  Unreal!

El Terrible debuted in 1992 as the masked El Engerdro del Mal (The Bad Boy) for independents in the Monterrey, Mexico area.  In 2002 he joined up with CMLL still under a mask this time going by Damian El Terrible as a techinco.  At some point he dropped Damien from his name now calling himself just El Terrible.

In 2004 he became a rudo eventually joining Perro Aguayo's La Furia Del Norte stable.  He would later join Los Perro's de Mal before an eye injury in Puerto Rico sidelined him.  In late 2011 Perro would leave CMLL forming his own promotion  however, Terrible stayed withe CMLL.

In 2009 he teamed with El Texano Jr feuding with No Limit: Naito & Yujiro in both CMLL in Mexico and NJPW in Japan.  Their feud culminated in a hair vs. hair match at Sin Salida on December 4, 2009 that saw the team of No Limit get their heads shaved.

On January 1, 2012 Terrible defeated Rush at a house show in Mexico City to win the vacant CMLL World Heavyweight Championship.  He would go on to hold the title an impressive 1,125 days before losing it January 30, 2015 to Maximo in Mexico City at the Super Viernes event.

While the reigning World Champion he was also held the CMLL World Tag Team Championship with Tama Tonga from November 13, 2012 - July 5, 2013.

He was a member of the Bullet Club off shoot stable Bullet Club Latinoamerica with La Comandante, Mephisto, Rey Bucanero, and Toma Tonga from 2013 - 2015.

You can find some great matches on YouTube including the hair vs hair match with No Limit: Yujiro Takahashi and Tetsuya Naito.

I'm not sure where, when, or how but I would like to see El Terrible in the ring again in the future. 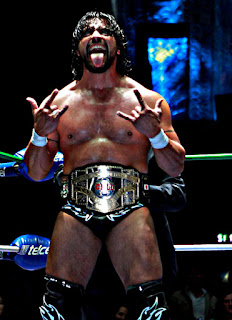