IndyMania: Part 4 the Wrap Up

Here is the fourth and final post about my wrestling trip to New York City and IndyMania.  This is just the summary of the trip, you can read about the trip here: Part 1, Part 2, Part 3

The plans for this trip started way back in July 2018 and came to fruition almost 10 months later and it definitely lived up to our expectations.  The numbers:

Travel, we drove 655 miles and spent 7 hours round trip on the Amtrak train going from Providence to Penn Station and back

We witnessed 54 wrestling matches with 185 different wrestlers, 101 of them was the first time I had ever seen them live, 9 wrestlers competed three times and 43 wrestled twice over the four days.  Our first show was at a hookah bar with a hundred people and the last show was at a sold out Madison Square Garden! 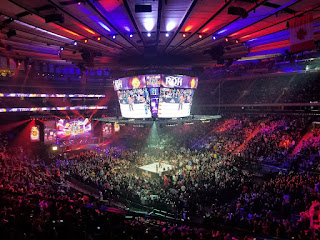 Best matches of the week for me were:

Sheer brutality on Ospreay who got his nose broke and was just beaten and stretched by Sabre and Suzuki.  We had front row for this and to see these guys live and this close was just unbelievable.

These two have always had great matches, to be there for a true classic encounter is truly a special moment.  Like being there for Flair vs. Steamboat.

I cannot praise this enough!  Just go watch the match.

I had never seen Cavernario and not for nothing I wasn't expecting much but I was blown away!  These two guys absolutely killed it and gave everything they had and somehow more.

This gets the nod for the 5th spot simply because it's Okada regaining his championship in his style match.

This gets an honorable mention because this was a dream match and they tore the house down.  This was Bandido's last indy match he had on the books after signing with Ring of Honor.

I also snagged a photo with New Japan English commentator Chris Charlton who was sitting behind us at the Wrestlecon Supershow. 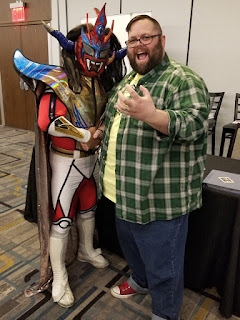 My favorite photos of my are with Jushin Thunder Liger and Faby Apache because they are in full gear, but I loved getting pictures with the everyone that I did. 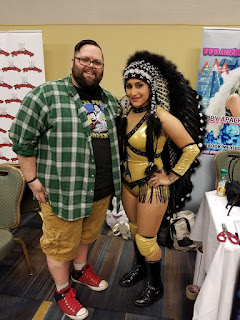 However my favorite photo op of the weekend was Jay with Minoru Suzuki! 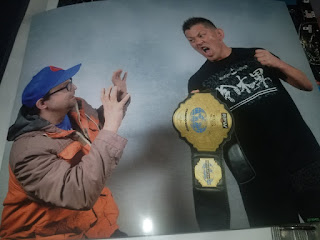 I added 71 signed trading cards to my collection and you can view them here:

My it's hard to pick favorite cards that I got because I got so many that I never thought that I would get signed like Faby Apache and all the Japanese wrestlers.  Also I love getting the NWA Wonderama card signed plus I got that sweet SCU All In card signed by all three members. 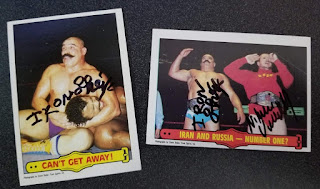 I'd have to say finally getting this card signed by the Iron Sheik was exciting.  I had gotten it signed by Nikolai Volkoff years ago and have tried many, many times to get Iron Sheik to sign it with no luck.  Sheiks health isn't the best and at 77 he doesn't make many appearances anymore.

The AAA press conference was the unexpected surprise of the week as we went just to watch and were invited in.  The still I posted above was used in a promotion video of the press conference but I also saw it used last Friday in the opening video package for AAA's Conquista Total Circa 2019 show in Mexicali, Baja California.

Here is a video I made on my phone of us jamming out with Tanahashi during his entrance for Revolution Pro Wrestling.  The ringside photographer grabbed a photo of this and I'm still trying to find him.


This wrestling trip was amazing!  If I were to rate it on my past wrestling getaways as a whole I would put it at number 2 behind NWA Legends Fanfest in 2009.