The theme of this post is ECW alumni.  Back in 1999 & 2000 Original San Francisco Toymakers released a line of ECW action figures.  Series 5 Bash of the Brawlers included ECW Trading cards and getting these cards signed are among my favorite cards to get signed.

These cards I got signed on Friday April 5th at the Wrestlecon Convention.  The first card is RVD's first ever trading card, he told me that he rarely sees them but mine was the second of the day that he'd seen.  Released in 1996 by BBM when Van Dam was with All Japan Pro Wrestling.  The second is one of his ECW cards released with the figures in 2000, the third card is a WWE card, the fourth released by Impact in 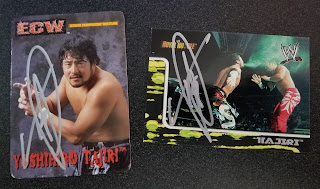 These cards I got signed on Friday April 5th at the Wrestlecon Convention.  The first card was released in 2000 with the ECW figures, the second card is from the Fleer WWE Royal Rumble 2002 set.  I like this card a lot because it captures him spitting mist in Chavo Guerrero's face!

These cards I got signed on Friday April 5th at the Wrestlecon Convention.  The first card is and ECW card, the second is a Topps 1999 WCW Embossed card signed as Hak the name he was using in WCW.  Next is 2007 WWE Topps Action card and finally TNA 2004 Pacific card.  I'm now realizing that the last two cards are in reverse order, but I'm okay with it. 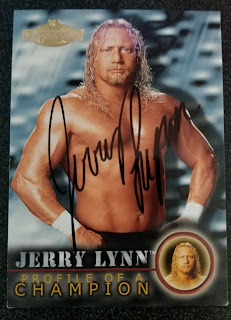 This card I got signed on Friday April 5th at the Wrestlecon Convention.  This card is from the WWF Fleer  set released in 2001.  I already have both an ECW and TNA card signed by Lynn in my collection.  I got those cards signed back in 2009 at an indy show Lynn wrestled on here in Maine.

Later Readers!
Posted by Michael J. Labbe at 1:53 AM