How "Iron" Mike Sharpe Changed my Perception of Wrestling 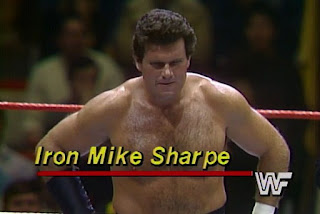 Growing up I watched as much wrestling as I could find on my television.  I felt fortunate back then because I had all the WWF and WCW weekend shows.  Then one day on the local channel I found IWCCW: International World Class Championship Wrestling promoted by the Savlodi's. 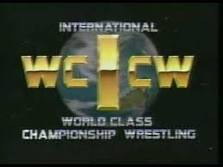 I don't remember the exact date, which is odd for me but it was definitely early 1990's.  I was watching WWF Superstars of Wrestling and during the show "Iron" Mike Sharpe appeared and lost a match in short order to a bigger name.  I later learned the term jobber or enhancement talent, but as a kid the guys that lost week in and week out I referred to them as bums.  So to me "Iron" Mike Sharpe was a bum.

Channel surfing I found IWCCW and I was intrigued as to what this wrestling was.  It didn't have that polished looked of Superstars and the arena was small as was the crowd significantly.  I was greeted by the "Boston Bad Boy" Tony Rumble who was talking about the opening match and was putting over the next competitor like he was the baddest man walking.

I was intrigued, I mean who was Rumble talking about!?! Everyone that I thought of was in the WWF or WCW so I couldn't even image.  And then Rumble held up his right arm bent at the elbow and slapped his forearm announcing "Iron" Mike Sharpe

What?  The bum from the WWF that just lost in a minute to Koko B. Ware?  I can beat up Koko B. Ware!  The camera cut from the control room to the arena and we see Sharpe walking to the ring and it's the same guy.

I thought, "Who is he going to lose to now?"  Then it happened, Sharpe hit and offensive move, and then another, and another.  His opponent, who I can't recall, couldn't get a move in to save his life.  About two minutes later Sharpe pinned him for the win.  I was shocked!

That's when it hit me there are bums for the bums!  I could be a bum to the bums! And that day started my dream of becoming a professional wrestler with my goal of being a jobber to the jobbers.  I kept my feet on the ground while reaching for those stars. 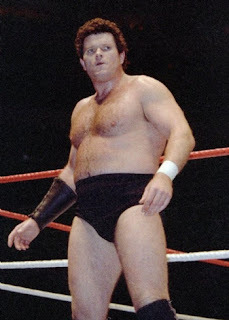 But back then I just knew what I saw Mike Sharpe in the WWF he was losing and when I saw him in IWCCW he was going to win.  This lead me to thinking, what other bums in the WWF are actually better than I think they are?

Until next time!
Posted by Michael J. Labbe at 6:36 AM