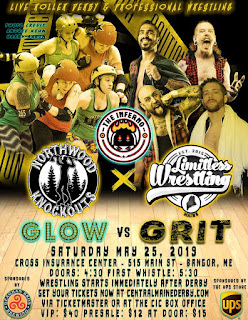 Saturday the 25th of May the wife, myself, and all three of the kids loaded up in Vanna heading north to Bangor for some roller derby and wrestling action!  When I was a kid Saturday mornings with my dad consisted of watching a block of candlepin bowling, roller derby, WWF wrestling and monster trucks.  So I was pretty psyched when this even was announced.  Now my wife isn't a fan of wrestling but she is a big fan of the roller derby, but I was still very surprised when on Thursday she said let's take the whole gang!

No trip to Bangor for us would be complete if we didn't grab a bite to eat at Chick-fil-A, so we had dinner there before heading over to the Cross Insurance Arena.  Tonight would be the first roller derby bout for Canaan & Addison and for Wesley his first time going to the matches.

The kids were free to get in, as was I because I'm a first responder, finally being a 911 dispatcher for 18 years got me a perk!  We sat up high for the roller derby bout so we could see the whole floor and then the kids and I moved down closer for the wrestling portion. 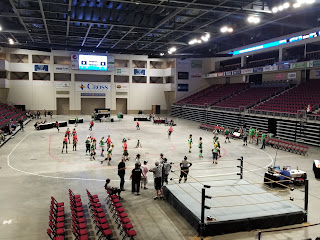 Central Maine Roller Derby was hosting the event as their Northwoods Knockouts took on The Inferno of the Androscoggin Fallen Angels Roller Derby League.  Kate and I have seen both of these teams before against other teams so it's cool seeing the face off against each other. 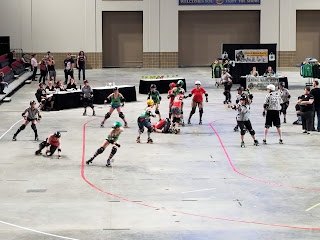 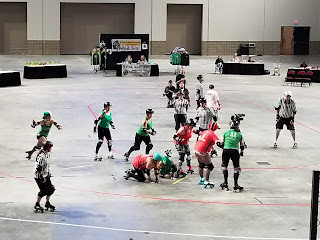 The bout was very competitive and the score stayed close, so close that at the end of the first half it was 82 - 80 in favor of the Inferno.  At the beginning the Inferno jumped out to a lead getting the score up 16 - 0 before the Knockouts came back and took over control.  Later in the first half  The Inferno were able to catch up taking advantage of a couple power jams. 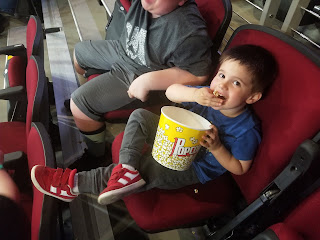 I didn't bring my good camera, I should have, so the derby pictures I took with my phone are okay at best. 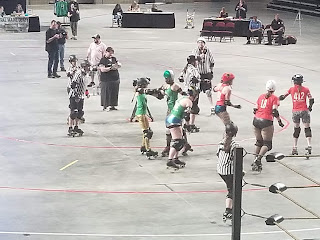 The second half the Knockouts jumped ahead early and and The Inferno just couldn't make the comeback.  Both halves featured some very hard hitting action and some really rough bumps.  These girls definitely bring it on the track. There was about 150 people, which is a great turnout, but looks small in this building. 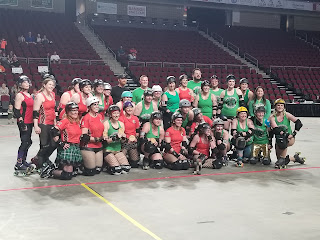 The final score was 167 - 139 for the Knockouts.  After the bout they have the closing ceremonies including announcing the MVP's.  Addison had an event poster and was able to get many of the girls to sign it. 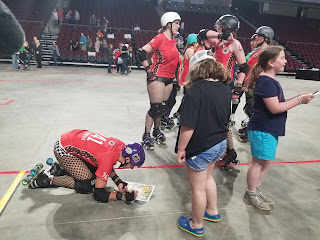 The wrestling matches, presented by Limitless Wrestling, started shortly after the derby was over.  The majority of the fans moved in closer to the ring side area including the kids and I.  Wrestling is not Kate's thing so she stayed up in our original seats.  Jess was taking photo's ringside and took this great picture of the kids and I for me. 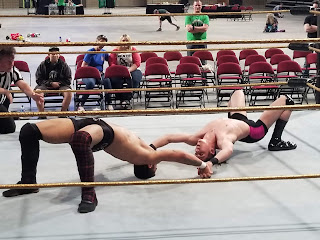 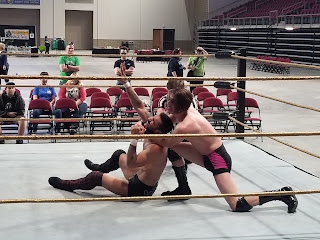 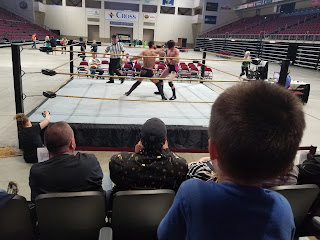 Decent match, lots of talking between the two Aggro really showed his athleticism.  My daughter made a comment to Price about his purple trunks, I wish I could remember as it was hilarious. 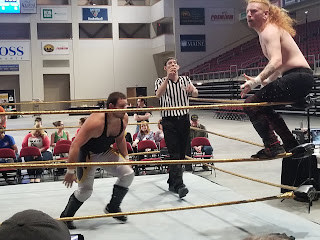 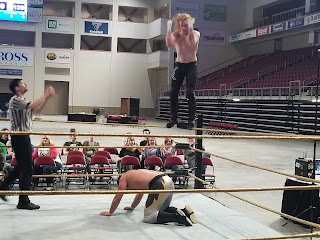 This was the best match of the night.  I was really impressed with CJ Cruz and surprised with his skills.  This was fast paced with action in and out of the ring and some really impressive sequences.  I really enjoyed it and would like to see Cruz more. 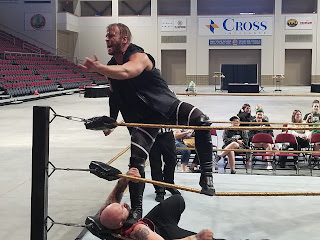 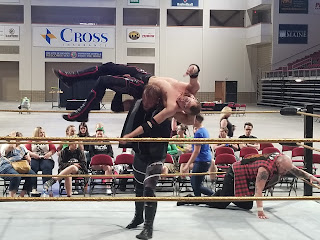 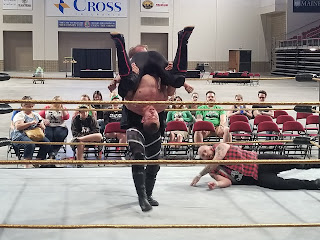 Fun match, Hurst is a great heel, Jaeger worked his ass off and is improving everytime I see him.  Lee headbutted everything which I enjoy. 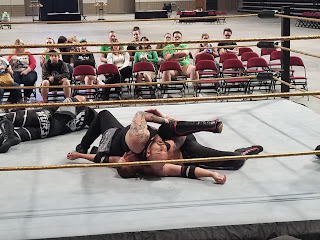 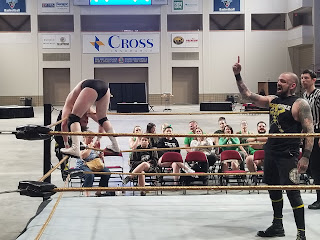 Strange called the audience trash, my oldest son told him that he was trash, so my four year old kept yelling at him that he was trash.  I found it hilarious.  McCarthy kept doing a spot where he would pick his nose and try to shove it in Strange's mouth.  He finally succeeded after Strange got the pin holding the ropes. 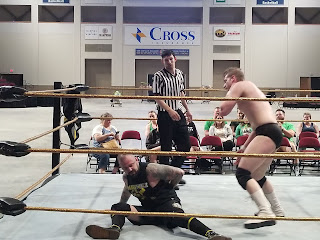 There was only four matches on the card which was prefect because the combination of the two events about just about three hours.  After the show was over the wrestlers came back out to sell gimmicks, Addison got some of them to sign her poster.  Wesley wanted to meet wrestlers and he did so by walking up to them and staring for a few seconds.

It was a wicked fun night and I hope they do another Roller Derby and Wrestling event.  Sincerely if you haven't taken the time to check out some roller derby you are missing out and need to go and experience it.  Check them out:

Until next time!
Posted by Michael J. Labbe at 1:59 AM