This week we take a look at the cards that I got signed at Limitless Wrestling: Hooked on a Friedman May 10, 2017.  I had a Shazza Mackenzie card as well that I was hoping to get signed but she never came out and sold merchandise.  She walked through floor a couple times before the show but I figured she be out at intermission, she wasn't.

In total I added 16 new signed cards to the my collection.  I'm currently working on reorganizing the way I store my cards and the order that I store them in.  If you collect cards please tell me how your store and organize your cards. 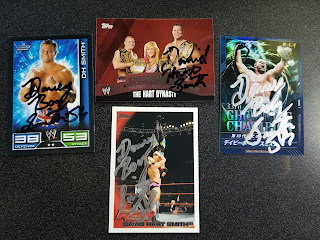 Bulldog was super nice to chat with, we talked about how in Japan he sometimes where the jeans with boots and the next night more typical wrestling gear.  He said the jeans was in the same style that his dad wrestled in, in his last WWF run but they are not at all comfortable to wrestle in.

The first card is a 2008 Topps Slam Attax card game, the second featuring Christian getting the ole high vertical suplex is from the 2010 Topps WWE set, above that is from the same set and features the Undisputed Tag Team Champions The Hart Dynasty.  I'd love to get Tyson Kidd & Natalya to sign it as well.  Finally we have the 2015 King of Pro Wrestling card from Japan. 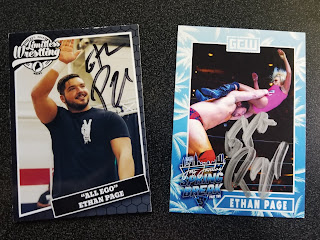 It was nice seeing Page back in Limitless at this show.  These are both independent cards, the first being from the the 2018 Limitless Wrestling set and the second as part of the 2019 Joey Ryan Spring Break 3 part Two set. 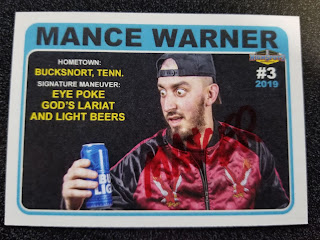 This is the only card that I bought at the show, all the others I already owned.  This card is from the 2019 Highspots card set that they send out in their monthly subscription box.  I paid $5 for the card.

I finally was able to get the three cards signed by Dunn!  For the last several shows he hasn't come out to sell merch.  All three are from Limitless Wrestling, the first from the 2018 regular set and the second two from the 2018 Moments sub set.  The middle card features Dunn's match with Cody Rhodes at Unreal on January 27, 2018 and the second is after winning the 2018 Vacationland Cup.

I have on other card signed by Dunn that you can see here. 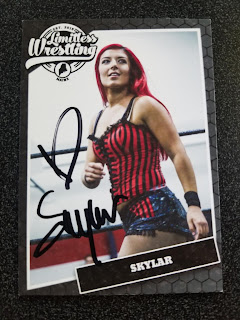 This card is from the 2018 Limitless Wrestling set.  This was Skylar's first Limitless show that I have seen her at since November 2017. 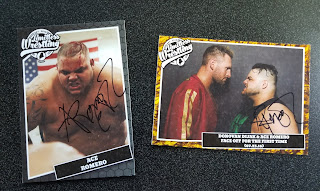 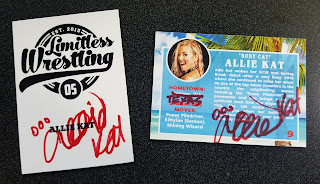 Kat was turned the card over to correct her hometown to Texas and I thought that that was all she was going to do when she signed the back.  I wasn't about to ask her to sign the front. The first card is from the 2018 Limitless Wrestling set and the second as part of the 2019 Joey Ryan Spring Break 3 part Two set. 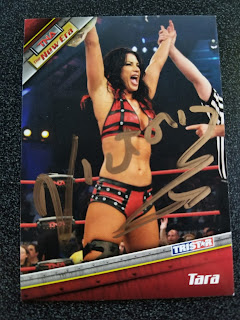 Also known as Victoria and Tara.  This card is from the Tristar 2010 TNA New Era set.  She was going by Tara in TNA and I asked her to sign the card as Tara, but I guess she didn't hear me.  Lisa Marie was very nice and courteous and is on her retirement tour after 19 years in the ring.

Until next time!
Posted by Michael J. Labbe at 1:57 AM