The theme in this post that links the wrestlers together is the NWA: National Wrestling Alliance.  All these wrestling in this post were prominently featured in that promoting during the heyday of Jim Crockett Promotions.  The NWA Wonderama cards are among my all time favorite to get signed. 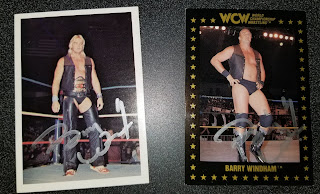 These cards I got signed on Friday April 5th at the Wrestlecon Convention.  The first card is from the 1988 Wonderama set for Jim Crockett Promotions, the second card is from the WCW 1991 Championship Marketing set.  Previously I had gotten a WWF card signed of him and Rotunda at the US Express.  Windham is one of my all time favorites, he was so good in the ring especially for a man his size.  His flying clothesline was tremendous! 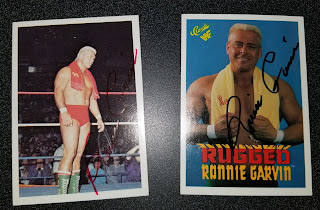 These cards I got signed on Friday April 5th at the Wrestlecon Convention.  The first card is from the 1988 Wonderama set for Jim Crockett Promotions.  The second card is from the 1989 WWF Classic set released by Game Time Inc.  I recently wrote a blog about Garvin and you can about it here: Ronnie Garvin: His NWA World Championship Matches 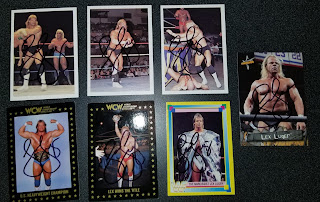 These cards I got signed on Friday April 5th at the Wrestlecon Convention.  My intention was to get three cards signed and I brought the extra and ask if he would like them.  I gave away many cards to wrestlers on this trip.  Luger at first said thank you, but then signed them all and gave them to me saying he had boxes of them at home.

Cards 1 - 3 are from the 1988 Wonderama set for Jim Crockett Promotions, cards 4 & 5 are from the WCW 1991 Championship Marketing set.  Card 6 is from the 1993 Merlin set that was released in Germany.  The final card is from the 1999 WCW Topps Embossed set.  These seven cards really show the progression of his career. 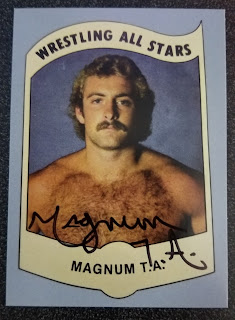 This card I got signed on Saturday April 6th at the Wrestlecon Convention.  I bought the card direct from Magnum TA. It is in the style of the 1982 & 1983 Wrestling All Stars trading cards but this one is not part of either set and the back is white and blank.  I had gone over to his table just to tell him that his I Quit Steel Cage match with Tully Blanchard is one of my all time favorites.  I'm really glad that I picked it up!  Previously I had gotten an NWA Wonderama card signed by him.

I spoke with David Peck http://www.1982wrestlingallstars.com/ an expert on the Wrestling All Stars trading cards.  He let me know that a Wrestling All Stars calendar came out in 1984 for Mid-South Wrestling and that this image of Magnum TA is from January in that calendar.  This explains why the back is white and there is no traditional text.

You can watch his You Tube video on the calendar here: 1984 Wrestling All Stars Calendar 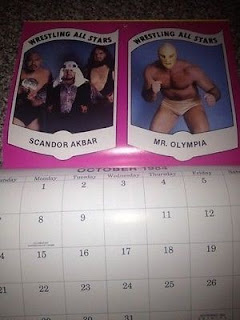 Later Readers!
Posted by Michael J. Labbe at 6:03 AM