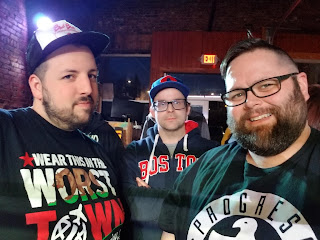 WrestleMania week is this biggest weekend in wrestling in the United States, of the year!  Not only does WWE come into town and takeover with NXT Takeover, The Hall of Fame, Axxess, Mania, Raw & SmackDown but companies from around the world piggy back and present their own shows.

It was first dubbed More than Mania but I like to call it IndyMania with 55 non WWE wrestling shows happening from April 3rd through April 7th it truly is unbelievable.  This year I'm attending with my friends Mikey & Jay.  The catalyst for us was New Japan Pro Wrestling announcing their joint show with Ring of Honor at Madison Square Garden.

Back in July 2018 I bought my Honor Club membership to get my pre-sale password and a few days later on August 9, 2018 we bought our tickets to the Garden.  From there we bought our train tickets and booked the hotel.  Over the next several months we bought tickets to other wrestling shows and meet and greets leading up to a vacation that was nine months in the making!

Wednesday April 3rd was the first day of our trip as Mikey joined me and we headed south to Jay's in New Bedford, Mass.  The drive down was nice even though it was snowing in Maine, we hit rain in New Hampshire and by the time we reached Jay's the sky was clear.  It was lunch time and as Mikey had never been Jay insisted that we hit DNB Burger.  I gave no resistance to the plan because the food is delicious!

After a fulfilling lunch we headed back north stopping to use Mike's free slot play at the Plainridge Casino.  We were there a couple hours, Mikey made out well, Jay not so much, and I lot $20 but I managed to win enough to keep it going so I wasn't bored.  Mikey had a food voucher and bought us early dinner at Smash Burger, yes we love burgers and ate several more over the next few days. 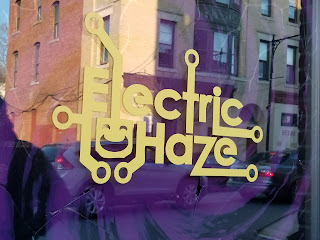 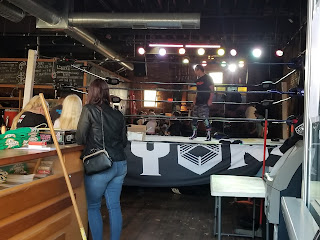 Our first wrestling show was at a hookah bar called Electric Haze in Worcester for the first episode of Beyond Wrestling's weekly television show on Independent Wrestling TV called Uncharted Territory. 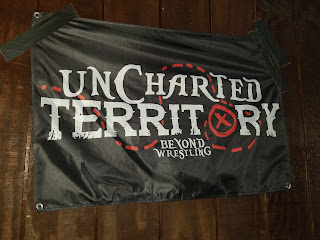 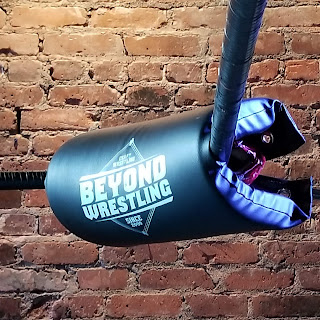 This was my first Beyond show it was fantastic!  Best match of the night hands down was The Beaver Boys vs. Aussie Open.  It was my first time seeing Aussie Open in person and they were the surprise mystery opponents.  This match was great tag team wrestling and you should make it a point to watch it.  Alex Reynolds is, by far, my favorite tag team partner of John Silver.  They have a chemistry together that is truly wonderful. 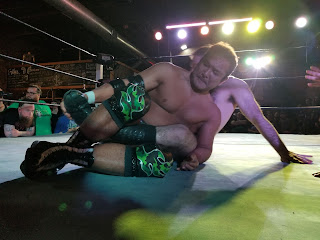 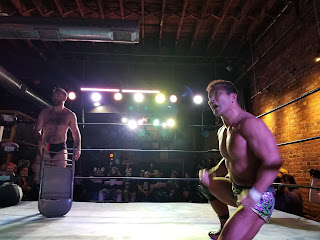 Sentimental match of the night for me was seeing Masato Tanaka live for the first time.  I've been watching him wrestling for over 20 years and he really brings me back to the hey day of FMW and ECW.  It was cool that he came out to his FMW music!  I marked out big time. 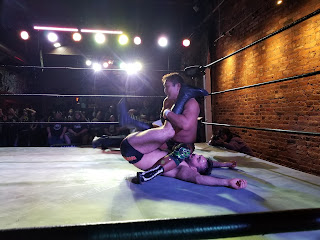 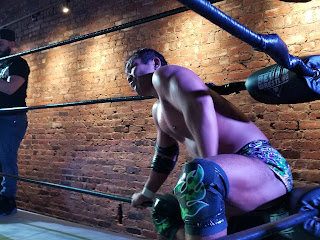 Session Moth Martina was the surprise partner of Orange Cassidy and was my first time seeing her live.  She was hilarious and I really enjoyed her in the right! I saw her one other time this weekend and I look forward to seeing her again hopefully in a Limitless ring.

Here are the complete results to the show:

We headed back to Jay's and went straight to bed for we had an early morning.  The train left Providence at 6:50 am and arrived at Penn Station at 10:20 am.  We brought our bags to the hotel and they said they would let us know when the room was ready.

We headed to Shake Shack for lunch, Jay and I fell in love with them last year during our first trip to MSG (read about that here: My Madison Square Garden Adventure ) and it did not let us down as it was still amazing.  We ate at Shake Shack four times this trip. 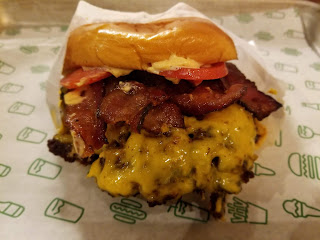 AAA had announced last week that they were having a press conference at MSG this day, but we didn't know the time.  At lunch Mikey finally found that it was a 10 am, central Mexico time which was in about 30 minutes!  So we headed over to MSG and found where the press conference was going to be.  We asked if we could watch and were told to stand behind the roped area.  We could see everything and it was going to be fun regardless.

A few minutes later a representative of AAA came over and asked if we were fans, we confirmed it, and then after a small quiz, invited us into the press conferences.  We got credential bracelets, they gave us a mask and invited us to enjoy some food and drink.   They took our picture with out masks on, we would have done anything they wanted.  Tuesday night at home I was watching the promo video that AAA released of the press conference and saw us in it! Check it out here. 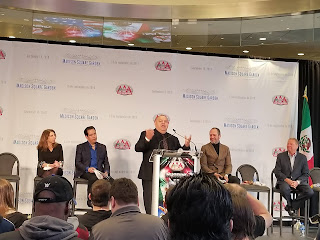 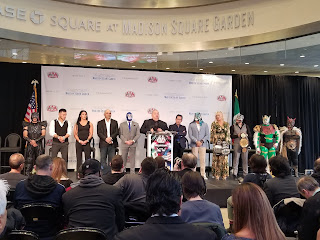 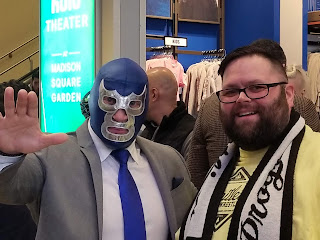 After the I managed to get photos with Blue Demon Jr, Konan, Scott D'Amore, & Dave Meltzer!  It was pretty bad ass and now we've technically been to an official AAA event.  They debuted at MSG on Sunday September 15th. 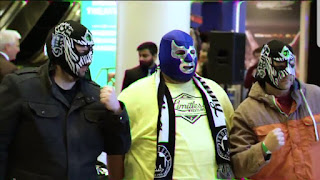 After the press conference Jay got a notification that our room was ready so we got situated and headed out to the Wrestlecon Thursday Night Supershow!  We got a junior suit with a separate living room from the bedroom that had a pullout so we all had a place to sleep. 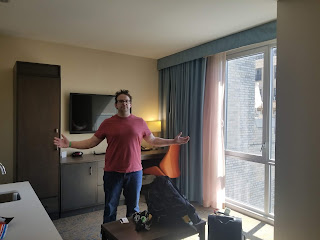 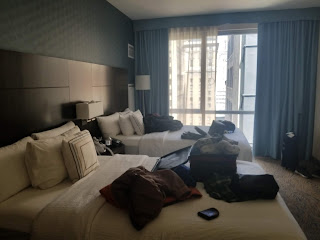 As our hotel was over a mile from the WrestleCon hotel we decided to use to subway and got metro cards.  I hate getting lost, I get mad at myself even if the guys don't care, and we got turned around more than once but we successfully navigated the city.

They had a meet and greet before the show and I got cards signed by Zack Sabre Jr. and Will Ospreay, plus my photo with Ospreay.  Jushin Liger came out in full gear so I had to get my photo with him because I HAD to.  Jay had bought pro photo ops with Sabre and Liger, they both came out awesome. 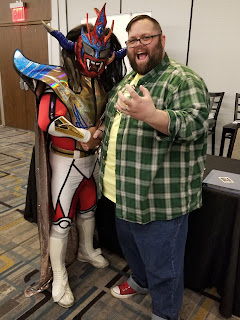 Everyone was super nice to talk to Zack and I talked about his trip to Orono, Maine for Limitless Wrestling.  He was living in the states at the time and he said that his trip to Maine for that show was the most fun he had traveling.  He wrestled Chris Hero that night, you can read about it here.

Originally we had tickets in the third row balcony, but there wasn't a third row when we got there.  Promoters decided that the view wasn't good and so they created a couple sections on the floor and said sit here first come fist serve.  So we ended up with third row on the floor. 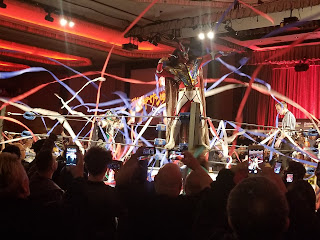 It was an awesome night of wrestling!  Best match is a toss up between Dragon Lee vs. Cavernario and Will Ospreay vs. Bandido.  It was Bandido's last indy match as he is signed with Ring of Honor.  After Lee vs. Cavernario fans started throwing money in the ring which is a tradition in Mexico for an excellent match.  At first security started to stop them but once made aware of the goings on they allowed them to do it. 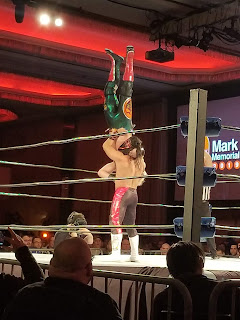 We were also treated to a six man tag featuring The Revolt! taking on the team of Hurricane Helms, X-Pac, and Jushin Thunder Liger!  Quite the crazy team that you would only see at WrestleCon!  Liger pinned Manning with the brianbuster!

Here are the complete results:

I could talk on and on about all the different wrestlers that we saw on the card.  As you can see from card it was stacked with Tanaka, Pentagon, Fenix, Zack Sabre Jr, Tajiri and so many others.  A stand out from this show was also Robbie Eagles vs. Arez vs. Flamita.  All the WrestleCon cards are on the Highspots Wrestling Network.

After the show headed back to the hotel stopping again at Shake Shack.  DAMN GOOD BURGERS!

It was a pretty awesome first couple of days!  Later this week I'll post Part 2.

Later Readers!
Posted by Michael J. Labbe at 1:42 AM