The theme of this set is dual signatures! 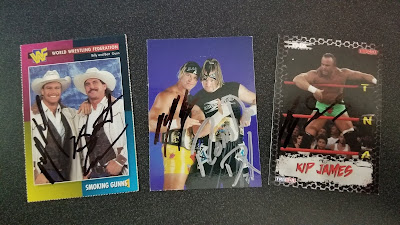 These cards I got signed on Friday April 5th at the Wrestlecon convention.  The first card is a Smoking Gunns card released by the WWF in 1995 as part of a set in WWF Magazine.  You can read all about me getting this card signed by Bart Gunn here.  The second card is from the 1998 Comic Images WWF Superstarz set.  I got this card signed by Road Dogg a few years ago.  The final card is from the 2008 Tristar TNA Impact set.

When I told Billy the story about how long it took Bart to get the card back from her he laughed heartily and said that, that sounded about right for Bart. 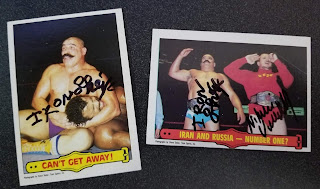 These cards I got signed on Friday April 5th at the Wrestlecon convention.  The first card is from the 1985 WWF Topps set and the second is from the 1985 WWF O-Pee-Chee series II card set that was released in Canada.  I got the card signed by Nikolai Volkoff many years ago and I've been trying to get it signed by the Iron Sheik since then.

I didn't want to miss my opportunity to get it signed at Wrestlecon and neither did anyone else as Sheik's line was consistently long all day Friday and Saturday.  I'm guessing like myself many felt that at 77 this might be that last chance we have to meet him. 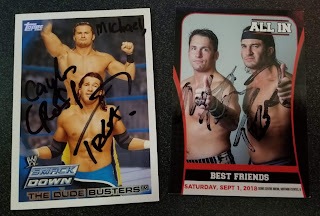 These cards I got signed on Thursday April 4th at the Wrestlecon Supershow.  The first card is a 2010 WWE Topps card that I had signed by Caylen Croft back in 2017, you can read about that here.  The second card is from the All In set released in 2018 from Highspots in conjunction with the All In event.  I got both signed by Trent at this event and the All In card signed by Chuckie T.  I had gotten cards signed by both of them previously: Trent & Chuck Taylor. 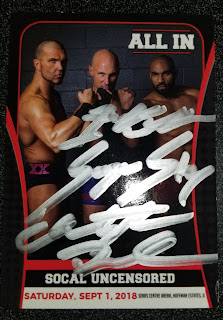 I got this cards signed on Wednesday April 3rd at Beyond Wrestling Uncharted Territory episode 1 from the Electric Haze in Worcester, Massachusetts.  This card is from the All In set released in 2018 from Highspots in conjunction with the All In event.

This is the first Scorpio Sky card that I am aware of.  I previous got cards signed by both Daniels and Kazarian.

Later Readers!
Posted by Michael J. Labbe at 1:27 AM