Mike Polchlopek wrestled in the WWE as Bart Gunn from 1993 until 1999.  The majority of that run was as one half over the very successful tag team The Smoking Gunns with "brother" Billy Gunn.  Together they were three time WWE Tag Team Champions. 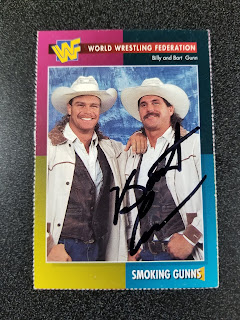 This card was released in 1995 by the WWE and was available only in the WWF Magazine.  Specifically this card was part of the set that was included in the April 1995 issue. 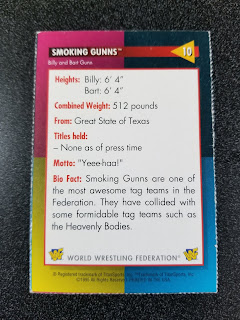 Last week I got a FaceBook friend request from a woman named Jennifer that I didn't know and it wasn't the typical spam friend request this person was local but I just didn't recognize her so I figured it was a mistake and hit delete.  A couple days later I get a Facebook Messenger message from her: 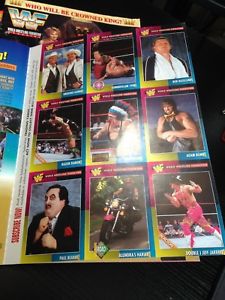 "Hey! Sorry to bother you but my dad is also Michael Labbe and I think he got a piece of your mail which he accidentally opened (because of the name of course).  When he was telling me about it I remembered you from the dojo with the kids!  Did you order a wrestling card?"

I order wrestling cards multiple times a month and this is the first time that this has happened so I thought it was odd.  My oldest son took karate for two years and Jennifer was one of the teenagers that help out with Canaan's age group.  Thing is he hasn't taken Karate in five years and I just didn't recognize her.

So I pick up the envelope from her and immediately I'm confused for two reasons, her dad lives in Pittston and I live in Gardiner.  The towns are close to each other and they use the same post office for delivery but they are different towns.  Also the address on the card is from my Gardiner, PO Box which I closed out in 1995! And yes the envelope was postmarked January 15, 2019.

Back in February 1995 I found an address online for Mike Polchlopek in Florida and being a unique name I took the chance and mailed the card with a self addressed stamped envelope and when I didn't get it back a few months later I figured that it was never coming back.  That happens more than I'd like it too, but it's the chances you take.  To get this card back FOUR years later is crazy, to have it get sent to my old PO BOX get routed to a different Michael Labbe and for his daughter to happened to know who I was, mind boggling.

This is one of the reasons why I don't but signed cards, the story behind each autograph that I get makes it worth the effort.  This April I'm going to WrestleCon where Billy Gunn will be appearing and you can bet on the fact that I will get him to sign this card!

Later Readers!
Posted by Michael J. Labbe at 6:45 AM