Limitless Wrestling returned to the Limitless Arena January 30th for their 3rd event "Under Fire" headlined by Zack Sabre Jr. vs. Chris Hero.

Mikey and I rode up to Orono parking at the venue and walking to the Orono House of Pizza for dinner.  There we met up with Roy, Josh, Jesse and others before heading over to wait in line for the show to start.

The opening match was AR Fox vs. Ace Romero in a fast paced and hard hitting match up.  Fox nailed Romero with so many of his aerial moves including his ultra impressive dive over the corner post to the floor.  Ace got the win in one his best matches I have ever seen. 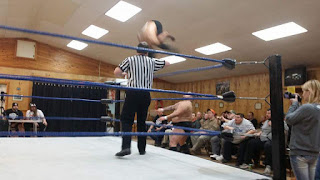 Honestly when I first saw Ace in 2013 he was in a tag team and I didn't think much of him and wasn't impressed at all.  That all changed when I saw Ace in a singles match July 2014 against Graves.  Then in September in a losing effort against Scott Wild I became a fan.  I have to give him all the credit in the world for busting his ass to improve and now he's one of the guys I look forward to seeing the most, and he killed it this night with AR Fox.

The Fatal Four way match for the House of Glory Tag Team Championships was my favorite kind, an elimination match with Lucha Rules.  Alexander Lee was forced to team with Danger Kid and after being eliminated first Lee blamed Kid and the two battled to the back.  No doubt we will see a singles match between them in the future.  Next eliminated was the Herbal Corps.  In a very impressive move JGeorge nailed a swinging full nelson, I love it when someone busts out classic never seen moves.  Private Party retained, Isiah Kassidy is young and is wicked good, can't wait to see more of him. 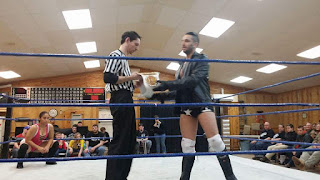 House of Glory Elite Champion: Anthony Gangone successfully defended his championship against a very game Sonya Strong.  This is only the second time I have seen Sonya and she is fantastic.  Not only that but she is one tough lady.  Gangone won with what looked a combination of a cobra clutch and cattle mutilation, the referee stopped the match after Sonya's had dropped 3 times.  I would love to see Sonya at future shows against the likes of Heidi Lovelace, Tessa Blanchard, Kimber Lee and others. 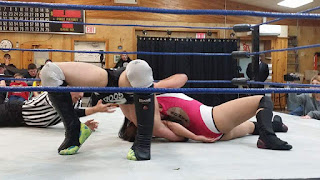 "Firebrand" Brian Fury waged war with Xavier Bell submitting bell with a vicious Boston crab.  This match spent more time on the floor than in the ring and the welts and bruised on both men showed this.  Fury has been around a long time and has always delivered in the ring.  He is finally getting some much deserved attention from Ring of Honor advancing in the Top Prospects tournament.  Bell is, I believe, a student of Biff Busick and he demonstrates a level of intensity reflecting this.  I'm anxious to see Bell in more singles matches. 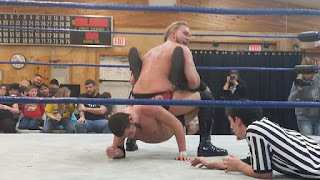 The Influence vs. M1nute Men was the first match back from intermission.  These two teams just didn't click for me tonight.  The match wasn't bad it just wasn't that good.  The timing which made it not flow very well. 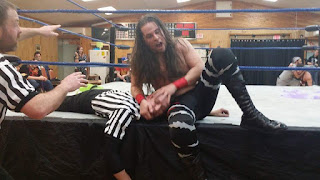 "The Carnivore" Alex Mason continued his losing ways, his record now 0 - 3 in Limitless after Brick Mastone got the pin.  After the mach Mason snapped beating down Mastone with a chair and even attacking the referee post match for counting the fall. 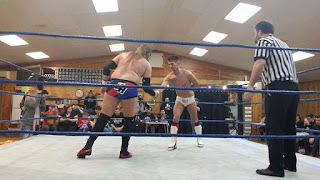 The main event of the evening could be a main event on any card around the world as Zack Sabre Jr. wrestled Chris Hero in the greatest matches I have ever seen in person.  Being in Maine I'm used to "names" coming in and going through the motions of a match and this was not the case at all.  They seemed to hold nothing back battling in and out of the ring hitting each other some very stiff shots and painful looking holds.  After 24 minutes and 10 seconds of competition Sabre scored the pin for the win.  Both wrestlers received a much deserved standing ovation for their efforts. 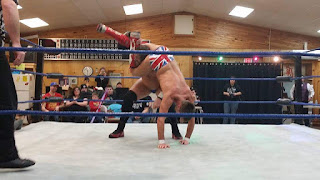 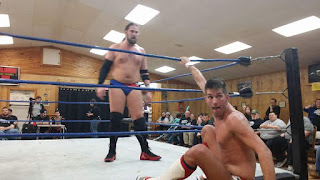 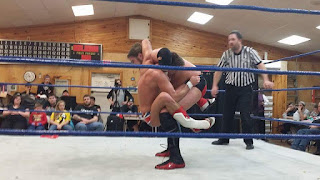 After the show I got my photo taken with Hero & Sabre to commemorate the awesomeness of the match. 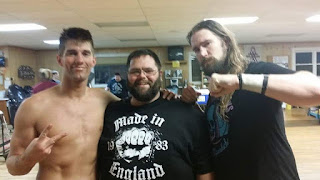 The event was recorded by TC Tapes, so you know it's going to look good, and live commentary was done throughout the night mostly with Steve "The Turtle" Weiner and one of the wrestlers.  For instance Chris Hero during the Ace Romero vs. AR Fox match.

It started snowing and the interstate sucked.  It took Mikey and I over an hour to go 35 miles then suddenly the snow just stopped and the roads were drive.  I got to work about 1am, it was a fantastic evening!