The following cards were acquired for me by my buddy Roy in person at various wrestling events that he attended in the later half of 2015. 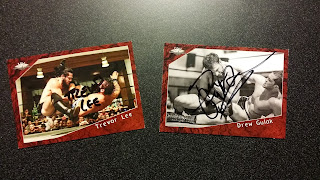 IPW Cards
Released in 2015 I found out from Chris Hero that the manufacturer didn't ask some or all of the wrestlers for permission to use their likeness on the cards.  Although he didn't have a problem with it he said others did and the manufacturer quickly sold off his supply.

The card on the left featured stand out Trevor Lee and the right Drew Gulak.  I believe Roy got both cards signed at a Beyond Wrestling show. 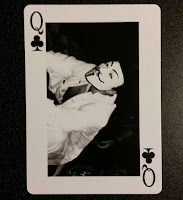 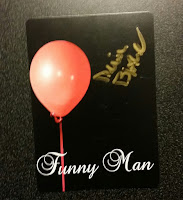 "Funny Man" Devin Blaze
One half of the M1nute Men Blaze had a deck of cards made with his photo on them and nickname on the back.  Although not a trading card per-say it sure is a clever bit of merchandise.  I do wish he would have signed the front of the card on his photo instead of the back. 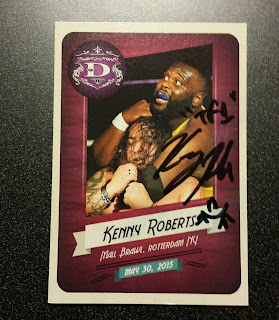 Kenny Roberts
Roy got me this card at an IWE show in Brewer.  I do not know much about it other than it was made in 2015 by and independent company in New York state.  The back of the card is plain white.  I have no idea what other cards or how many are in this set.

Later readers!
Posted by Michael J. Labbe at 1:41 AM