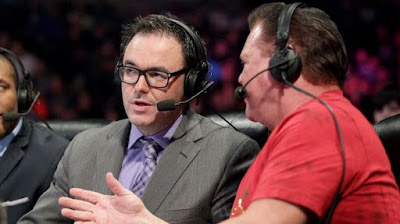 In January I was very excited to lean that Mauro Ranallo and his legendary voice would become the lead announcer on Smackdown when it debuted on the USA Network.

I first heard Mauro when he and Bas Rutten called Pride Fighting Championship, my favorite MMA League.  Mauro has a very unique and exciting voice and I truly enjoy listening to him call the action.  He also provided commentary on EliteXC, ShoXC, Invicta Fighting Championship, Glory Kickboxing and Showtime Championship Boxing.  If it's a combat sport he has guided with his insightful play by play.

Many may think that WWE is his first time he has called wrestling, they would be wrong.  Most recently he and Josh Barnett called New Japan Pro Wrestling on AXS.  His first foray into wrestling was at the young age of 16 in 1989 for All Star Wrestling in his native Canada and then later Stampede Wrestling from 1999 - 2000.

I have never been a fan of Michael Cole, I realize he has spent 19 years in the WWE and has put in his dues to get to where he is.  I also realize he had big shoes to step into taking over for Jim Ross but that's not why I'm not a fan, I simply do not like how he calls matches.  I didn't like his time on Smackdown with JBL but that was only because JBL would rip on Cole all show long.

Currently I love how Kevin Owens jumps all over Michael Cole before, during, and after his matches.  I don't know if it's a work or a shoot, but I like it.

My feeling is, and my hope is, is that talent will shine through and Ranallo will eventually become the lead announcer for all WWE programming.

You can find out more about Mauro at his website http://www.mauroranallo.com and check out his blog with Bas Rutten called Rutten and Ranallo, available at soundclound and Itunes.  It's only up to 7 episodes, but it has fast become one of my favorite podcasts.  Bas Rutten is another guy I love listening too, he tells great stories and has loads of charisma.  These two together are simply fantastic. 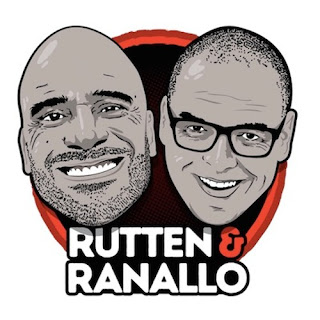 Thanks for reading, please take a moment to leave a comment, like my blogs Facebook page at www.facebook.com/thewrestlinginsomniac.com
Later readers!
Posted by Michael J. Labbe at 3:49 PM