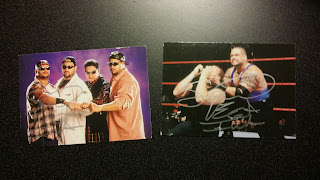 I got these cards at different times.  The above cards were manufactured by Comic Images in 1998 for the WWF.  The card of the left features Los Boricuas while the card on the right is a solo Savio Vegas card.  I got these cards signed on April 30, 2010 at an IWE event in Fairfield. 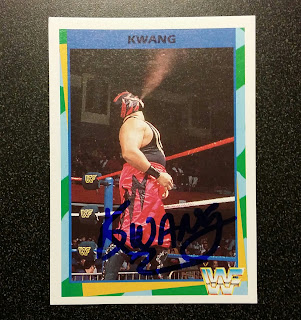 This Kwang card my buddy Roy got signed for me at an IWE event at the end of November 2015.  Kwang was played by Savio Vega when he debuted in the WWE in January 1994.  He played the character until April 1995.

This card was released in 1995 by the Merlin company in Germany.

Later readers!
Posted by Michael J. Labbe at 4:39 AM