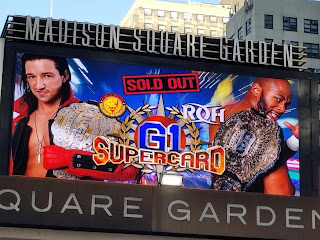 Saturday April 6th we slept getting up at seven am to start our day.  It was a gorgeous morning walk to the subway station unlike last yesterday where it rained all day with a high of 43 degrees.  Today was sunshine and clear skies hitting the lower 70's.

We got to the convention hall about 8:30 am just in time for the Ohio Valley Wrestling press conference announcing the Al Snow Wrestling Academy Combine coming this June.

Once again when doors open people were able to file in at a quick pace.  Mikey and Jay headed off to who they needed to see and I found myself only needing to meet Christian, my final presale.  I got him to sign a Japanese card of him and Edge as The Canadian Rockies.  He commented that he didn't see that card often at all.

I went down the the Rhinelader room and saw Magnum TA sitting at his table with no line so I went up to thank him and to tell him how much I love his match with Tully Blanchard from Starrcade 1985 the infamous I Quit steel cage match.  While there I saw he had a stack of what looked like a trading card based on the 1982 - 1983 Wrestling All Stars set, the back of it was blank.  I bought the card and had him sign it.  Check out my post about the card here.

I left the hotel looking for a instant photo machine, which the concierge told me was just down the street.  I headed down the road and it was even nicer outside looking for the Duane Reade pharmacy, which I saw across the street.  Entering the pharmacy I didn't see a photo machine and when I asked the clerk she pointed out the window saying, "We don't have one but the Duane Reade across the street does."  Yup.  So I crossed back over and went in where for $4 I was able to print and 8 x 10 of Faby Apache and I from Friday.  It came out nice.

I headed back to the convention getting my picture signed by Faby and she took another photo with me.  She remembered me and thanked me again for the cards and letter.

I met Jay and Mikey in the grand ballroom for Wrestling Revolver's Pancakes and Piledriver's III with a bell time of eleven am.  Before the show I bought cards from Sawyer Fulton and Dave Crist and got cards signed by Chris Brookes, Adam Brooks, and Sammy Guevara.  I even made Guevara's Vlog in a montage of him signing for fans. 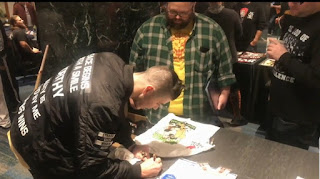 The show started a little late to accommodate the 1200 fans that needed to file into the ballroom.  We had front row once again for this show, in the same section as both shows yesterday, just different seats. 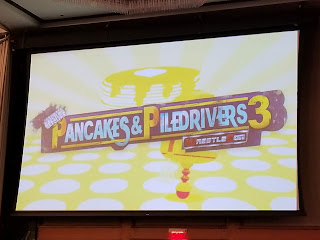 There were nine matches on the card but featured 50 wrestlers on the show!  The best match on the card and the one of the best matches of the weekend was Ricky Shane Page vs. Tessa Blanchard.  It went on second to last and stole the damn show!  I cannot say enough good about this match! 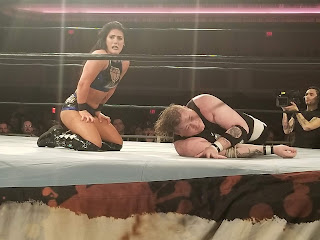 This was my first time seeing RSP in person, I love his entrance and his balance on the top rope is crazy good! You could tell that he led this match and he did a phenomenal job.  The match told a great story and featured Tessa giving RSP a Canadian Destroyer off the top rope!! 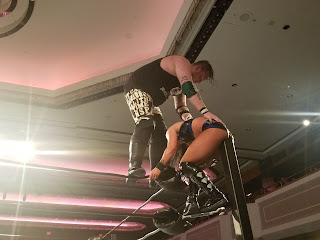 They had a Hoss fight and it was cool to see Ace Romero on the show.  Jessicka Havok entered herself and took a wicked beating including a top rope splash from winner Jacob Fatu.  She is one tough lady. 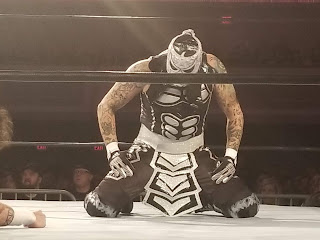 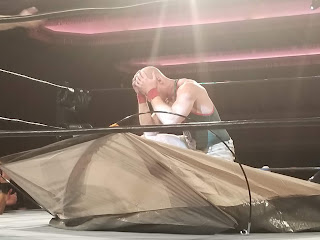 Main event featured Shane Strickland's final match on the indies as he has signed with NXT.  Here is the rest of the card:

After the show I stopped to tell RSP how awesome his match was.  Mikey and Jay hit the convention to meeting a few more wrestlers before we headed out around three.  Once outside there was a Tartan Parade that featured some really good bagpipe music.

We stopped at Shake Shack one last time and along with my burger we had some of their chicken nuggets which are amazing!  The place was packed to the gills and we were lucky to find a table.

We ended up being able to rest up at the room for about an hour before heading out to Madison Square Garden, the reason this trip was thought of the begin with.  Mikey had never been before so we made sure to stop on the main concourse to show him the WrestleMania I display. 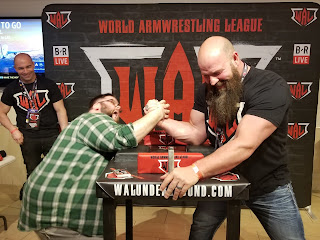 Just before the display the World Arm Wrestling League was setting up a booth and giving out free trading cards of their champion "Monster" Michael Todd who was accepting all challengers...I did not win. 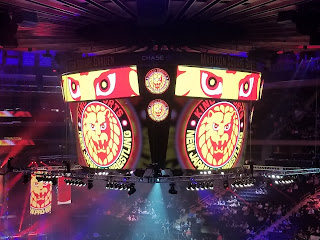 Our seats were in the front row of the balcony and we had a good view, my only complaint is that my legs were a bit cramped.  Also the show itself from dark match to main event almost six hours, so we were sitting in our seats longer.  During the ladder match I had to get up and stretch my legs.  I was able to watch it from the concourse because they have bar seat openings.  For the main event I took my seat again. 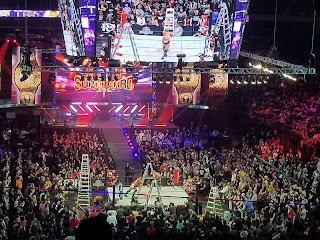 The show opened with a women of honor six woman tag team match dark match that will probably be on the DVD release.  The pre-show featured the 30 man Honor Rumble battle royal and was included on the New Japan broadcast. 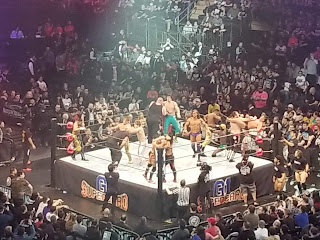 During the Honor Rumble we got a lot of New Japan talent that weren't on the main card including Jushin Thunder Liger, and Ishii and Suzuki squaring off with some stuff shots to each other. 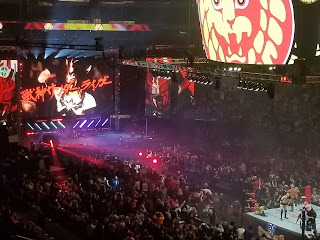 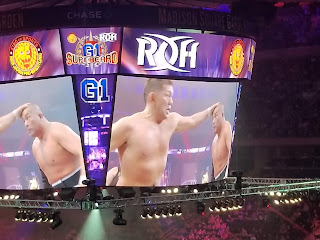 A surprise entrance in King Haku, and a Delirious who rarely wrestles anymore and typically just on the Ring of Honor shows in Japan and the UK.  The biggest surprise of all was entrant number 30 THE GREAT MUTA!!  I legit lost my shit and am surprised I didn't explode my throat I yelled so loud. 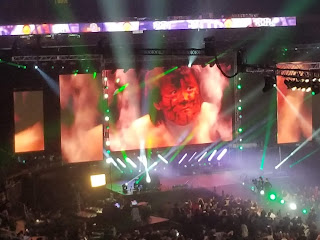 I remember reading more than once over the years that the one thing Muta hasn't done in his career but wanted to was wrestle in Madison Square Garden.  When New Japan first announced the show in July 2018 Muta has just had double knee replacement surgery in May and I thought, I wonder if he'll try to get on the show in a tag match. 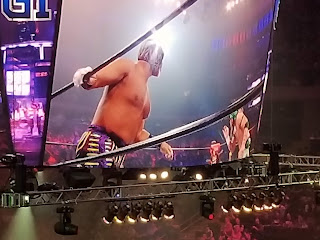 In the coming months he was announced to appear at House of Glory, then that he was wrestling in a six man tag, then he was appearing at WrestleCon.  I held on a hope that he just might appear at the Garden.  I don't know why I was so happy about it, but I just wanted Muta to check that box so badly.  We saw a lot of wrestlers make their garden debut on this night but the one that is the most exciting is that we saw the Madison Square Garden debut of The Great Muta.

Here is the entire card:

The show really felt like it was two different shows in one, Ring of Honor and New Japan Pro Wrestling.  And the ROH side of the card wasn't very good at all, except the ladder match.  The Woman of Honor title match was bad and the introduction of Angelina Love and Velvet Sky post match was meh.  Enzo and Cas jumping the rail in an apparent worked shoot was ridiculous and if you watch the show they aren't shown or even mentioned.  The street fight was just okay.

The New Japan half of the card was tremendous!  Ibushi vs. Naito was one of the best matches of the weekend.  Okada vs. Jay White was a classic Okada paced match, and we got to see the top two titles in New Japan change hands. 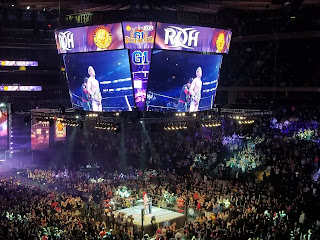 After the show we grabbed some slices at Bravo's, running it Flip Gordon, and headed back to the room.  I'm so glad that we got to see this historic card at Madison Square Garden, the first wrestling promoter to run a show at the world's most famous arena since 1960 that wasn't a McMahon. 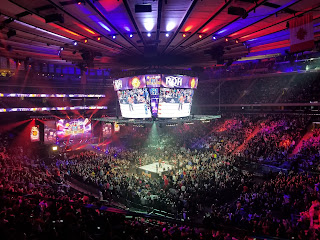 I know Jay & I said this last year, but I really don't need to go back to the Garden anytime soon, unless I want to take my sons someday.  I happy going to indy shows and their intimate settings or going to WWE here in Maine.  I don't feel the need to go to huge arena shows.

The next morning we took the train back to Providence where Amy picked us up.  We stopped on the way back picking up big sandwich fixings and other snacks.  Back at Jay's we watched more of Takeover until the WrestleMania preshow started.  We made big sandwiches, they were excellent!  We took in WrestleMania from his couch and it was perfect. 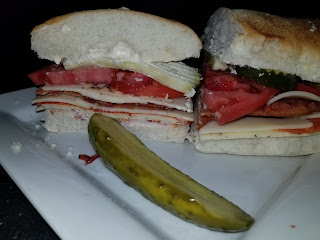 Jay wasn't feeling well so he went to bed early with Amy, Mikey and I stayed up and watched all of Mania, I dozed off during the main event but caught the finish.  All in all it was a very good WrestleMania card.

Monday morning Mikey and I headed back north, it rained heavily most of the way and once we got back into Maine it turned to snow and the roads got pretty bad to closer to Gardiner that we got.  We stopped on the way home in Mass to get Kate a Jimmy John's and we passed time during the driving recording a podcast about the weekend.  You can download it here: Our Indy Mania Weekend!

I'm going to make one more post that summarizes the week with my favorite moments, matches, and highlights.