This is the first of post highlighting the cards that I acquired during my IndyMania Wrestling Vacation in New York City April 3rd - 6th, 2019.

The theme of this initial post is going to be the all the women wrestlers that I got cards signed by. 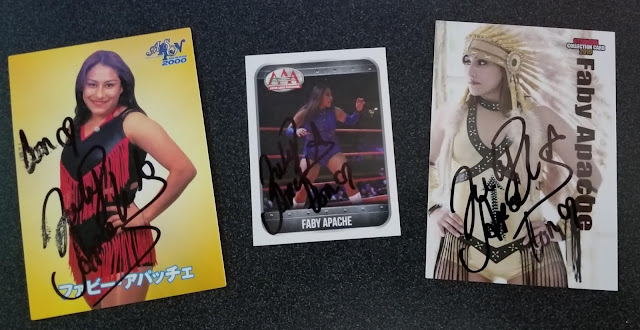 I got these cards signed on Friday, April 5th at the Wrestlecon Convention.  This was on of my highlight meet and greets at the convention as Faby is one of my all time favorites.  I never thought I'd have the change to meet her. 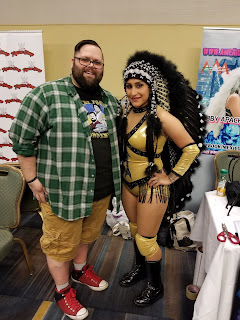 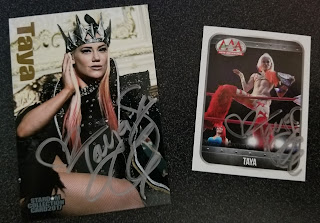 I got these card signed on Friday April 5th at Joey Ryan's Penis Party.  The first card is from the 2017 World of Stardom collection and the second is a 2016 Panini sticker that was released in Mexico. 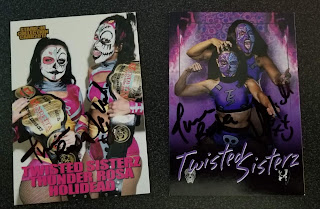 I got these cards signed on Friday April 5th at Joey Ryan's Penis Party.  The first card is from the 2017 World of Stardom collection set and the second is self produced by the Twister Sisterz, I bought it from them for $5.  Much like the reaction that I got from Faby & Taya, and every other woman wrestler that I present a Stardom card to they are annoyed or visibly upset that Stardom released these cards and didn't bother to ask them or give them for themselves or to sell.  I had two Stardom Cards and offered to give Thunder Rosa one of them and even let her pick them up.  She was very appreciative. 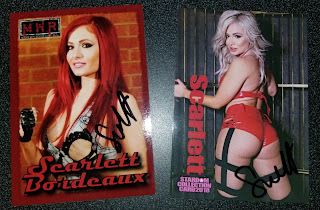 I got these cards signed on Friday April 5th at the Wrestlecon convention.  These two cards show the beginning and current looks of Scarlett's career.  The first card was released by Missouri Wrestling Revival in 2013 while the second was released in 2018 as part of the World of Stardom collection. 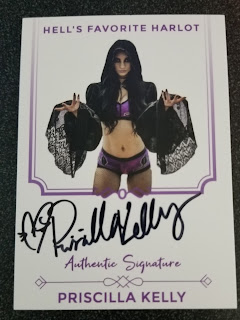 I got this card on Friday April 5th at Joey Ryan's Penis Party.  It was made by Fight Plaza and I bought it from Priscilla for $5.

Later Readers!
Posted by Michael J. Labbe at 3:36 AM